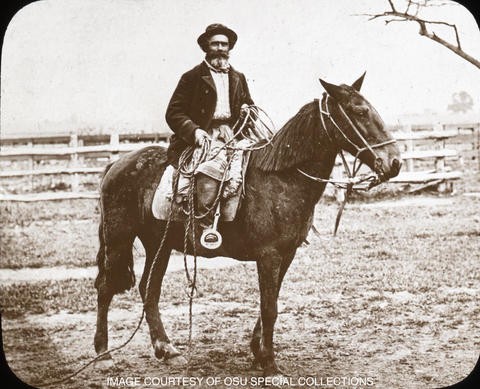 Jews on horseback once galloped over the Argentine Pampas

Growing up in the small Pittsfield community, just about every Jew I knew was Ashkenazi. My friends’ parents were engaged in business, law, medicine, engineering, teaching, and accounting. Nothing, in my young girl’s mind, particularly exciting. So when I learned about the Jewish cowboys of Argentina, the image of those gauchos galloping across the Pampas grasslands atop their steeds captured my imagination. (It still does.) But how these Yiddish-speaking Jews become folk heroes in South America?

But I get ahead of myself. Jewish presence in Argentina began well before the gauchos came to town. With the Alhambra decree, Spain expelled its Jews who refused to convert to Catholicism. Many headed to South America and conversos, or crypto-Jews, came along with them, perhaps thinking that life would be easier in the New World. However, the Inquisition followed them to Argentina and, fearing more oppression, most of those conversos assimilated into the population. Once Argentina declared its independence from Spain in 1816, its General Assembly abolished the Inquisition and an organized Jewish community developed.

Of course, persecution wasn’t confined to the lands under Spanish domination. Just few decades later, due to various conflicts and revolutions in Spain, Italy, the Slavic nations, and France, more immigrants arrived, among them Jews who brought their Ashkenazi practices and culture to the Sephardic mix.

Among the Eastern European immigrants arriving in Argentina in the late 19th century were Ashkenazi Jews fleeing pogroms and poverty. And, just like their fellow immigrants to the United States, many brought with them socialist political sensibilities first developed in their homelands (along with Zionism and even anarchism), and they became active in establishing labor unions.

Among the newcomers to Argentina in 1889 were 824 “Rusos” (Russians). And this is where the story of the gaucho begins. These cowhands needed help to launch their new lives, so they solicited help from the philanthropist Baron Maurice de Hirsch and his Jewish Colonization Association.

Three factors influenced de Hirsch in his decision to fund the Rusos. First, he knew that the 1853 Argentinian constitution guaranteed religious freedom. Second, he knew that Argentina was encouraging immigration. Third, and most important, he believed that Jews needed to be self-sufficient. So, the baron put his money where his beliefs were and helped masses of Jews desperate to flee the waves of vicious pogroms ravaging the Russia Empire, and purchased about a million and a half acres of land in Argentina. And that is where the gauchos rode the range.

More immigrants arrived in the early years of the 20th century, from Europe, Morocco, and the Ottoman Empire, adding Mizrahim to the Sephardi and Ashkenazi melting pot.

As the Tribe’s history has a way of repeating itself, life hasn’t always been grand for the Jews of Argentina. The country closed its doors to Jews fleeing persecution during the Holocaust, but welcomed Nazis fleeing prosecution after the war’s end. Among the war criminals finding refuge in Argentina was the infamous Adolph Eichmann.

Although as Argentina’s Minister of War, Juan Peron had signed Argentina’s declaration of war against the Axis, as president he allowed Nazis to immigrate. At the same time, he established diplomatic relations with Israel and was the first to allow Jews to hold public office. When Peron was overthrown, anti-Semitic activity increased dramatically, and reached its height during the repressive and deadly military junta rule of the 1970s and 80s. Migration patterns reversed, and many Jews fled Argentina, heading to Israel, Europe, and North America.

Then, in the 1990s, terrorists attacked two Jewish institutions in Buenos Aires, bombing the Israeli Embassy and Jewish Community Center, killing 85 and wounding hundreds. More Jews left the country, most heading to Israel.

Despite the loss of over 45,000 Jews since 1955, Argentina still has the largest Jewish population of any in Latin America.

Jewish cowboys? You bet! Back in 1889, a group of 824 Russian Jews fleeing poverty and pogroms in Russia arrived in Argentina and became gauchos, or cowboys. This recipe for chicken stew was reportedly cooked over an open campfire by those gauchos, in a clay pot known as a cazuela. Hence, the name of the dish. If you don’t happen to have a campfire handy, you can still make this recipe in your kitchen.

Although the basic ingredients are the same as in the original recipe, I’ve cut down the number of steps involved after it took me almost three hours to prepare the recipe the first time around. I can’t detect a difference in flavor.

4 potatoes, peeled and cut into chunks

½ lb. pumpkin or other winter squash, cut into chunks

Heat 3 tablespoons of the oil in a large pot or Dutch oven.

Sauté the chicken until golden brown on all sides.

Sauté the onions and garlic in the pot.

Return the chicken to the pot along with all the vegetables.

Bring to a boil, cover, and reduce the heat to a simmer.

Cook for 20 minutes and add barley.

Cover and continue cooking for 40 minutes.

Add a little of the hot liquid from the pan and beat the egg vigorously.

Add the egg to the pot and stir.

Add green beans and peas and cook for 5 more minutes.

Taste the stew and correct the seasoning, if necessary.