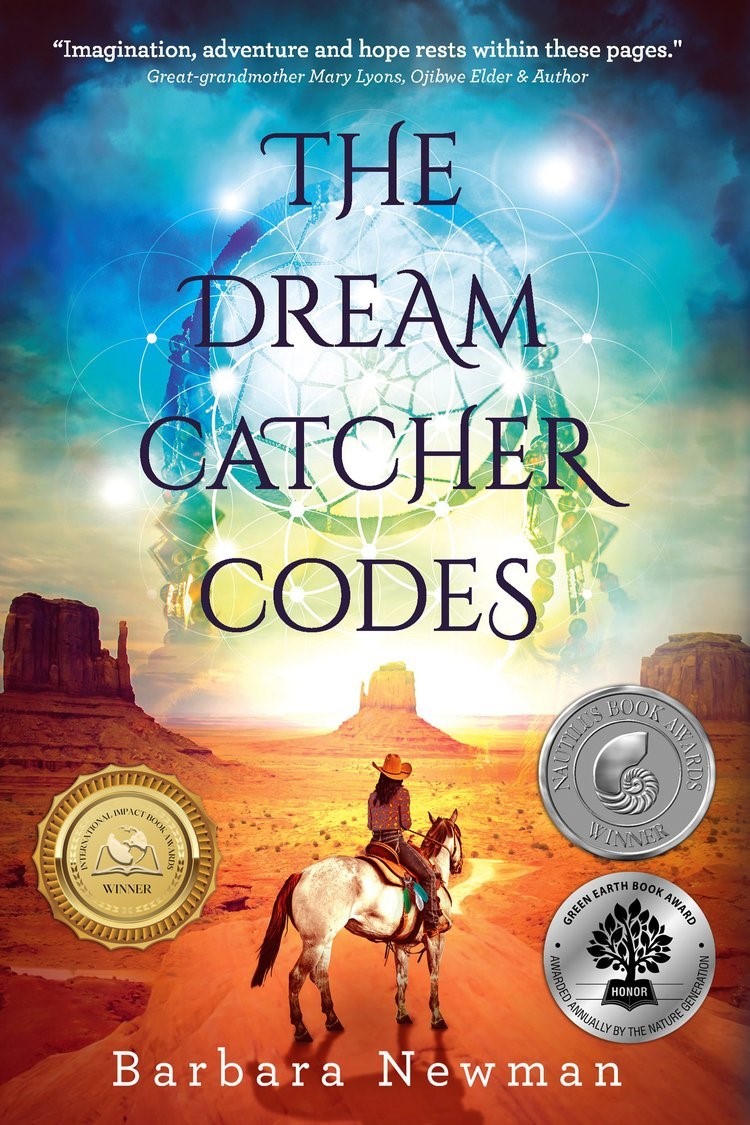 On Thursday, February 16 at 6:45 p.m., join author and filmmaker Barbara Newman and young writer Sadie Honig-Briggs for a timely Tu B’Shevat conversation on the topics of climate change, building cultural bridges and girls finding their voices and vital place in the world.

They will be talking about Newman’s young adult novel The Dreamcatcher Codes, about which the author writes: “It builds cultural bridges, unity and hope while illuminating two critical issues of our times: climate change and girls finding their voices and vital place in the world.”

This free Jewish Federation of the Berkshires program will be presented via Zoom. Please visit our calendar of events at jewishberkshires.org for links to our programs.

Barbara Newman didn't know when she began writing The Dreamcatcher Codes that two themes would rise so prominently – the Jewish value of tikkun olam and diversity in her characters. She writes:

In the story, repairing the world is the calling – the urgent task for four fierce girls as they come together to restore Mother Earth. One of the girls is Jewish. She teaches the others about the Tree of Life, and the Hebrew words and symbols that come through ancient "codes." She opens her heart and builds a bridge between herself and Maia, her Lakota "sister." Their threads of connection are strengthened when they talk about the genocides of Jewish and indigenous tribes, the intergenerational wounds, their ancestors, and the Holocaust. These girls are so different, and yet....

In advance of their talk, Sadie Honig-Briggs, a freshman at Monument Mountain Regional High School in Great Barrington, responded to her experience of the novel for the BJV.

The Dreamcatcher Codes: A tribute to the Earth and all the strong girls who inhabit it

By Sadie Honig-Briggs / Special to the BJV

In the depths of the waters / streaks of sunlight lit the fish of a million colors, / a kaleidoscope dancing in the waves, / moving to the currents of change.

The currents of climate action, feminism, and youth activism run deep through the pages of this book, The Dreamcatcher Codes by Barbara Newman, and light up the fire of change that rests in all of us.

The Codes, stored in a magical Crystal Horseshoe, hold all of the Laws of Nature. The only hope of saving the dying planet Earth rests within these Codes, and in the hands of Sophia Rose, the Guardian of the Crystal Horseshoe. For years, Sophia has protected the Codes and used their powers to help nature; but one fateful day, in an encounter with an evil, greedy force, the horseshoe breaks and a piece is stolen. Sophia, knowing that she cannot put the Codes back together on her own, reaches out to Maia, a young girl with a deep love for the Earth. Together, they assemble a task force of strong girls from all over the country. Yue, from the West, with a passion for protecting the oceans. Ava, from the South, who loves horses and anything to do with music. And Falcon, from the East, who loves the natural world despite the concrete city she lives in. With the help of four magical horses and all the mystical spirits they meet along the way, Maia, Ava, Yue, and Falcon travel the world, fight evil, and use their combined strength to find the stolen piece of the horseshoe, and restore the Codes.

Through beautiful, lyrical language and a true understanding of what it means to want to help the Earth, Newman weaves a story that will resonate with today’s young people. Maia, Yue, Falcon, and Ava are just regular girls, but when they put their passion and power towards one common goal, they are able to achieve wonder. When we hear “climate justice,” our minds might go to climate activists like Greta Thunberg and Jerome Foster II, or to laws that cut down on fossil fuels. Really though, climate activism doesn’t just come from one person or one law; it comes from people joining forces and using their love and talent to make change, which is exactly what the four girls in The Dreamcatcher Codes do.

As a teenager growing up in the 21st century, I connect with Maia, Yue, Ava, and Falcon, and their journey together. Their passion for the Earth, music, the oceans, and animals is conveyed perfectly through their dreams, their journaling, and their conversations with one another. Falcon, in particular, resonates with me, because she is a young person of the Jewish faith. Her belief in tikkun olam (repairing the world) is shown through her actions. She is a perfect example of what it means to take the core thing that the Jewish religion focuses on: making the world better, and turning to real action. I know that a lot of Jewish teenagers, myself included, are keen to uphold these values, but don’t quite know how they can make an impact. Falcon provides us with an example, even though it is an extreme one, showing that we really can be mitzvot ourselves.

These girls reflect all kinds of values from different cultures and communities. They are wise beyond their years, and yet, Newman has still made them relatable. The language they use with each other is profound, the things they see in the Earth and the ways they interpret messages and stories are sophisticated, but still, they are just young girls. Maia is anxious to get her first period; Falcon is grappling with her sexuality; and all four of them are figuring out how they want to be in the world. They also have fun together despite all the peril they face throughout the book, and they stay connected to their friendship even when the task at hand feels overpowering. For those of us growing up today, we live in a dichotomy: fixing the climate crisis that others before us have failed to fix rests on our shoulders while still just being kids who experience heartbreak and joy, friendships, confusion, and everything in between. This is a difficult thing to balance, but just acknowledging that we are all going through it makes it easier to handle, which is exactly what Newman does in this novel.

The Dreamcatcher Codes is a beautifully written tribute to the Earth and all the strong girls who inhabit it. This book should be read by every person, young and old, who cares for the beautiful planet we live on. It should be picked up by anyone who has a deep passion for something, anyone who appreciates language, and everyone who wants to get lost in a story of sisterhood.

Barbara Newman always wanted to be a cowgirl. Growing up in New York didn’t stop her. She took that can-do spirit and became an award-winning global creative director, leaving an indelible mark on popular brand culture. After hearing an NPR story about the American cowgirl, she was so inspired, she left the advertising world and found herself in Montana, Wyoming, and Texas filming a documentary about their lives. An advocate for empowering girls, Barbara facilitates girls’ leadership programs and was part of the think tank that inspired the Fred Rogers Center for Early Learning & Children’s Media. Barbara has a fierce love for the natural world. She lives in the Berkshires of Western Massachusetts. with her family and their English bulldog. This book is her love letter to Mother Earth and all of her daughters.

Sadie Honig-Briggs lives in Tyringham with her family and many pets. Sadie has always loved anything to do with the arts, so in her free time, she loves to act in school productions, write short stories and poetry, or sing very loudly in the car with her siblings. As of this year, she also runs cross country…a surprising turn of events that she actually enjoys very much. Sadie is also very interested in activism and wants to use her passion for the arts to help fuel social justice.