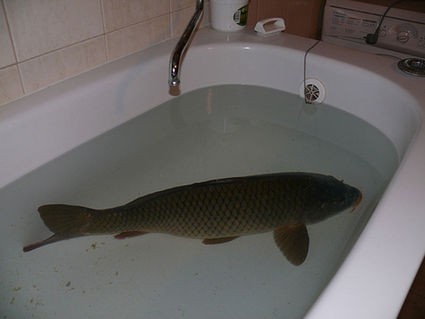 A few years ago, my daughter and her husband Adam were living in Chicago. Passover was just around the corner and Elana decided that she wanted to make gefilte fish from scratch. Perhaps she was remembering a beloved storybook from her childhood — Ina Friedman’s The Carp in the Bathtub — or it was my father’s telling her true stories about his own mother’s fish in her bathtub. Or maybe she was recalling my story of having an actual fish stuffed into its skin while celebrating in my kibbutz’s sukkah.

Or just maybe it was that awful gray stuff that comes in a jar, or its slightly better cousin found in the freezer section of the grocery store.

Regardless of her inspiration, Elana had never actually seen how the sausage was made, if you will. If the required preparation became too much for her sensitive soul, she would probably go from being a vegetarian to an out-and-out vegan.

But where were they to find the required fish onfilin** (to stuff)? Only one place in the Windy City had live fish for sale. So, off to Chinatown they went.

The proprietors at the first store spoke no English and neither Elana nor Adam spoke any dialect of Chinese. She tried acting out that she wanted to club the fish. They refused and did the job for her.

They met with greater success with the second fishmonger. Elana did the job, and the owner gutted the fish and put it into a plastic bag. The kids left the store, placing the bag-o’-fish into car. But, moments after pulling out of their parking space, they heard a noise coming from the back. The fish was flopping and squirming, and the bag holding it was shimmying across the floor.

Despite the fright, Elana managed to pull herself together enough to prepare the recipe and present the duly gefilt-ed fish to the 20-odd guests at their Seder table.

Given its presence at Shabbat and holiday meals, one would think that the Jews invented this iconic dish. But one would be wrong. According to the late food historian, Gil Marks, the idea actually began with the Romans, who filled animal skins with chopped meat. The practice migrated to medieval Germany, where upper-class cooks took to stuffing large freshwater fish such as pike and perch. The earliest printed recipe for grilled gefuelten hechden can, in fact, be found in a 1350 German (non-Jewish) cookbook. The stuffed whole fish eventually found itself on the dinner tables of medieval German Jewish households.

Fast forward to the 17th century, and the dish makes its appearance in Poland, Ukraine, Hungary, and the Baltic states, where it became popular for very practical reasons. One of the major advantages of gefilte fish was that, due to the addition of onion and matzah meal, one fish could be stretched to feed a large family. And stuffing the skin eliminated the need for expensive eggs as a binder, making the dish even more appealing to Jews in precarious financial straits. Poaching instead of grilling or roasting became common practice around then.

Of course, we Jews love to differ on even the silliest of issues, even — or maybe especially — when it comes to food. According to the late Yiddish language scholar Marvin Herzog, there’s something actually called “the gefilte fish line” that describes the border between sweet and savory gefilte fish recipes. A strictly Jewish division, Herzog wrote that the line is roughly drawn between the two main areas of Yiddish dialect speakers: central Poland/Galicia in the south and Lithuania in the north. The sweet tooth must have extended even further south as I recall a sweet “Old Vienna Style” fish sold by Rokeach.

Why sweet? According to Marks, upon the introduction of the sugar beet industry in early 19th-century Poland (in which some fellow tribe members were engaged), Jews added sugar to everything, gefilte fish included.

** Thanks to Henny Lewin for the Yiddish consult.

In a food processor fitted with the metal blade, finely grind the fish fillets and onions, but do not puree.

Gradually mix in the water, using more for a softer consistency, less for a firmer one.

Add the eggs, followed by the sugar, salt, pepper, and matzah meal, using 4 eggs for fluffier fish, 3 for firmer.

Cover the mixture and refrigerate for an hour while making the broth.

Place all the broth ingredients except the sugar into a large pot and turn flame to high.

Once the water comes to a boil, reduce flame and simmer for 20 to 30 minutes.

Strain and discard the solids.

For easier handling, wet your hands often while shaping the fish. For each patty, form about 1/3 cup fish mixture into a 3-inch-long oval patty.

Drop the fish patties into the boiling broth and return to a boil.

Reduce the heat, cover partially, and simmer, shaking the pot occasionally, for 1½  hours.

Remove the cover, add the sugar if desired, and simmer for 30 minutes.

Let fish cool in the broth.