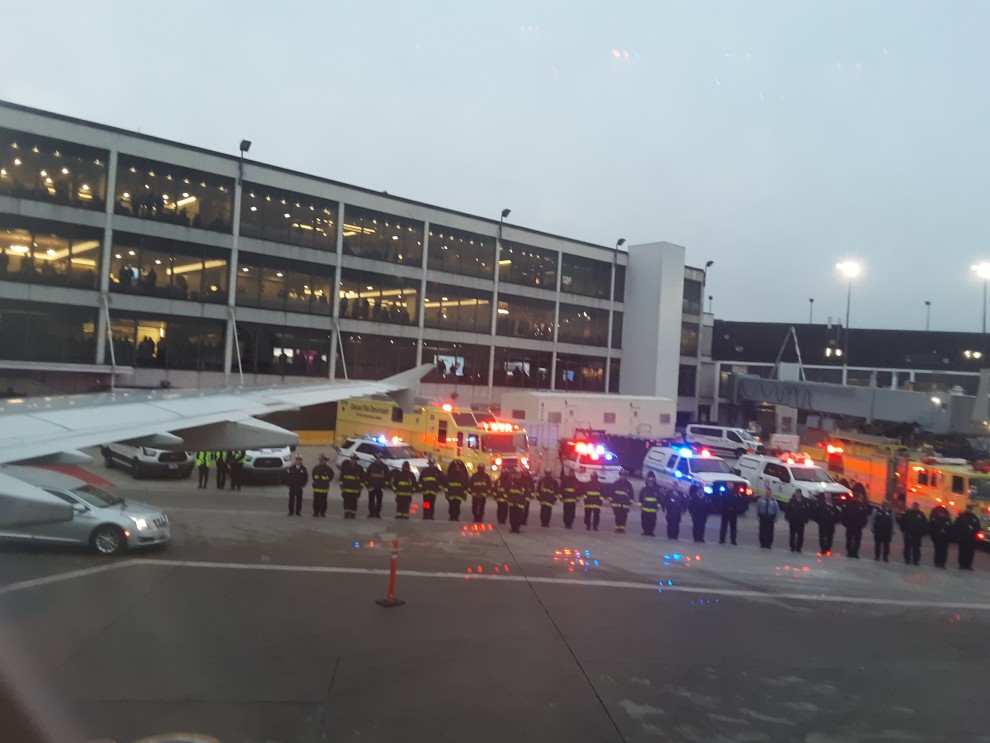 Moving through the throng of bedraggled air travelers at the end of a long concourse in the San Diego airport, the military man attired in an immaculate dress uniform stood out like a figure from the illuminated Gothic manuscript Le Très Riches Heures du Duc de Berry, a nobleman amid huddling peasants. Though my knowledge of the military’s way of doing things is limited, I knew enough to identify him as a Marine and a sergeant, but could not fathom why he would be so impressively turned out to travel on a commercial flight on a weekday morning.

I soon found out. As I boarded my flight to Chicago, I noticed him seated in first class, sullenly using his smartphone. As our plane taxied toward the runway, the pilot identified the Marine sergeant on board by name, and shared that he was on our flight to accompany the casket bearing a fallen Marine “on his final trip home.” The pilot added that we should expect a detail of military personnel, police officers, and firefighters outside the gate when we arrived at O’Hare Airport, and asked that we remain seated when we arrived so that the Marine sergeant could deplane first.

The slow descent over snow-covered flatlands (it was late fall 2019) into grim, grey Chicago, combined with the knowledge of what awaited us when we landed, was enough to leech the sunny Southern California calm out of me. After we landed, the pilot reminded us of the commotion we could expect when we pulled in to our gate and asked again, with perhaps a touch of firmness in his tone, that we remained seated so the Marine sergeant could get off first.

About a dozen official vehicles, blue and red lights flashing, awaited us at the gate, along with a silver-toned hearse and the usual complement of airport service equipment. The police officers, firefighters, and airport security saluted the plane as we rolled in. The ground crew and baggage handlers setting up their equipment paused from their work. Onlookers inside the multistory terminal pressed against the windows trying to get a look.

After we arrived at the gate, the pilot gave the Marine sergeant his cue to leave and thanked him on behalf of all on board for his service. Most of the passengers started to clap, respectfully but tepidly, as if they were uncertain whether a round of applause was the appropriate expression of support for the Marine’s unhappy duty.

And then everyone started to gather up their carry-on bags and prepared to exit into the terminal to catch their connecting flights. I settled in to a window seat to watch the scene unfolding on the tarmac. The realities of wartime are so far removed from my peaceful life thanks to the sacrifice of Americans like the fallen Marine, and I felt obliged to pay my respects somehow.

A conveyer belt was positioned near the front of the aircraft, and the coffin emerged from the cargo hold. A Marine honor guard awaited its descent. The first responders stood at attention and saluted. The baggage handlers stopped their work and took off their hats, exposing their heads to the foul weather. The casket was draped in the American flag, and the honor guard stiffly carried it to the silver hearse. A Marine in dress uniform led family members to the procession, and stood alongside them as they paused for a few moments before the rear loading door was shut. The Marine then led the family to a limousine, and the procession was off to its next destination.

When I finally looked away, all the San Diego passengers were gone and the cleaning crew had started their work at the front of the plane. The only person left from the flight was one of the flight attendants, who had also stayed on board to observe. We looked at one another, recognized that we were both crying our eyes out, and turned our faces away, leaving it at that.

It is impossible to be unmoved after witnessing a family’s heartbreak at such proximity. But as I exited the plane, I recognized that what had also hit me very deeply was the way the police and firefighters stood at attention and saluted, playing their roles in the ritual of stoical grief that was once again reenacted, this time to honor the sacrifice of a fallen Marine.

Seeing them brought me back to New York City after the attacks of September 11, 2001, when I worked in lower Manhattan. For months, it seemed as if you couldn’t turn a corner without happening upon some kind of memorial service, some communal expression of sorrow taking place on the streets. Many of those memorials felt impromptu – unlike the Marine Corps, we New Yorkers were unaccustomed to dealing with violent mass death in our midst, and had no time-honored rituals to enact, no protocols to observe, no creed to guide us or help us rationalize the experience. Still, almost always as I recall, there were men and women in uniform, standing at attention alongside their vehicles with flashing lights.

My essential 9/11 memory – after the North Tower collapsed at 10:28 a.m., my next-door neighbor in Brooklyn emerged from his townhouse wailing with grief. His wife worked in the Port Authority office in the North Tower, the first building hit but the second to go down, toppling a half-hour after the South Tower. “How can she be alive?” he kept asking. I spent a tense hour by his side, until he got a message that his wife had made it out.

I’ll never forget the first thing she said when she arrived home, after the hugging and weeping.

“As we were going down the stairs, there were firefighters going up the stairs. They were still going up,” she said with amazement. And then, on a dime, her expression turned blank. “They’re all dead,” she said matter-of-factly, yet with boundless sorrow.

On 9/11/2001, an enemy clarified what it thought of us and what lengths it was willing to go to express that hatred; but that enemy also made clear who had been standing guard between us and their evil, and who would continue to do so – people in uniform who go up the stairs when called.

As I watched the ceremony unfold on the tarmac at O’Hare Airport, I felt deeply weary of the strife that has metastasized in the nearly 20 years since that day – not only the seemingly endless combat and incidents of murderous terrorism worldwide, but also the vehemence and bad faith displayed in our cultural and social wars, in our ideological wrangling, and in our increased interfaith, intercommunal, and internecine religious strife. Those “aha!” moments broadcast triumphantly on-air and online when a tragedy, atrocity, or failure appears to validate a particular worldview. And as I revisit my experience of last autumn now in early June, more than two months into a global crisis of confidence brought on by COVID-19 and a week into a spasm of nationwide mob violence, I feel that weariness all the more acutely.

What I learned from having been present at so many commemorations with good people whose job it is to keep going up the stairs – they are all part of the same thing, a line between us and chaos, sometimes a bulwark, sometimes gossamer, but a line nevertheless. From my experiences after the 9/11 attack, I learned the humane virtue of just showing up at the appropriate time, keeping one’s mouth shut for a few minutes, acknowledging that there are big things going on, and then demonstrating that one can respond to them with a bit of dignity, empathy, and selflessness.

The Marine who died was Pfc. Christian Bautista, 21, of Cook County, IL, who had enlisted in September 2018. As reported by Stars and Stripes, he was killed in a training accident “at about 7:15 a.m. [on October 20] in a M-1151 Enhanced Armament Carrier vehicle at the Marine Corps Mountain Warfare Training Center in Bridgeport, Calif... Two Marines in the vehicle attempted life-saving measures before the arrival of paramedics, who pronounced him dead at the scene.”

I’ll never know what his motivations were for serving in the military, only what he accomplished in a too-short life lived almost entirely during wartime – knowing the risks, he took on the job of going up the stairs.

May his memory be a blessing.