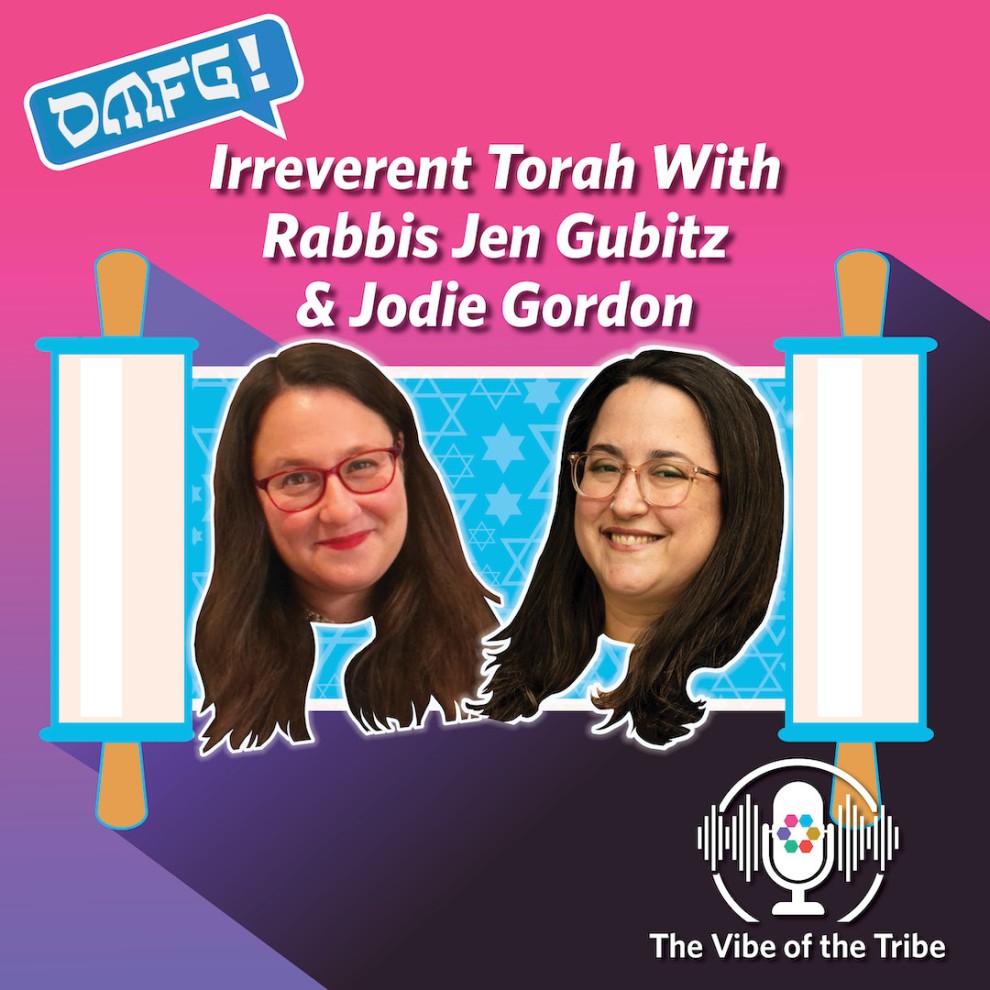 “I like to think that Judaism showed up for people” during the pandemic, says Rabbi Jen Gubitz. “I also think Peloton and Netflix did.”

For the last year, the OMfG Podcast, which Rabbi Gubitz co-hosts with Rabbi Jodie Gordon of Hevreh of Southern Berkshire, has shown up every month or so with the two Jewishly-focused friends’ breezy-but-serious take on matters mundane to metaphysical. The show’s tagline is “Jewish wisdom for unprecedented times,” and while many people have started to feel inured to pandemic life and habituated to its inanities and indignities, the OMfG podcast is a reminder that what we continue to experience is, as Gubitz puts it, “still unprecedented. Every day seems to be unprecedented.”

And generally not in a good way – thus the “f” in OMfG, which both rabbis nevertheless assert can mean many things aside from the obvious. Gubitz adds that “the beauty of the podcast, which is not that different from giving a sermon,” is that it taps into “what is the vibe going on right now.”

“There’s a certain casualness to the tone of the podcast that is purposeful and intentional,” says Rabbi Gordon, who says that they are “trying to democratize access to Jewish thought, to say that there is a way in which you could relate to these two – I think we’re still allowed to call ourselves young or youngish people, right? – who think that Jewish life and tradition and thought and text have something to say of use to us in this moment.”

Both rabbis were ordained at the Hebrew Union College-Jewish Institute of Religion in New York, Gubitz in 2012, and Gordon in 2014. Their careers and personal lives have taken different routes. Gordon is a rabbi and education director with a congregation in a rural area and is raising two daughters with husband Joshua Bloom, a member of Federation’s executive board. Gubitz has worked in the not-for-profit world and says she has many jobs – she writes, works part-time with a congregation in the Boston area, and is focused on building an organization called Modern Jewish Couples, which supports couples on the pathway to marriage. (A newlywed herself, Gubitz married in the summer of 2021, her wedding postponed one year because of the pandemic.)

One of the pleasures of listing to the OMfG podcast is listening to the co-hosts share the vagaries of their lives and the challenges arising from their particular circumstances. By the end of the podcasts, which run approximately 30 minutes, their dialogue coalesces around a relevant and practical nugget of Jewish learning arrived at from their different points of view – the two agree that Gordon is generally more of an optimist than Gubitz.

“The metaphor that folks used to describe this moment,” says Gubitz, “was, ‘We can’t be in the temple, so our homes became our center’ – which is a narrative of the Jewish people forever.” Both rabbis agree that the early pandemic was a time of incredible creativity as Jewish institutions scrambled to create programming and virtual engagement opportunities for people needing to connect with both the faith and each other.

Says Gordon: “The pandemic forced Jewish institutions and Jewish thought leaders, clergy, professionals, to be better prepared to democratize access to Jewish life and learning because you could go anywhere. So what is going to compel somebody to sign on for services via Zoom at Hevreh versus Temple Beth Anywhere, when it’s all available [online].”

While early episodes of OMfG focused on living with lockdowns, more recent installments touch on what it’s going to take to get back on normal footing post-pandemic. Will it even be possible to approach communal life without accommodating the trauma accrued during the lockdowns and by the political, social, and generational divisions they engendered?

“Something we’ve talked about is the sense of patience, or sometimes lack thereof, that people of a certain generation have had with the pandemic,” says Gordon. “I think a narrative that I’m aware of is for parents with young children is, ‘We all stayed home to protect you’ – you being the people who are older and more vulnerable. ‘We stayed home. We stopped going to school. And now you’re vaccinated and would like life to go back to normal entirely. But now it’s our young children who are not vaccinated.’ So now, when there are differences in people’s sense of protection relative to vaccination, what does it mean to still try to be a multigenerational community? And how do we continue to protect each other?”

She adds: “My hope is that – and here I speak from my own little village of Anatevka – that people are always going to remember how we all stepped up to protect each other."

“Being Jewish has always been about tolerating risk, right?” says Gubitz. “That’s what it means to be a Jew in the world – am I safe? Are we safe? And obviously, the circumstances are different than many other awful periods of Jewish history, in terms that it’s something we can’t see that’s impacting our safety. We don’t know if the virus is surrounding us. And so, I think communities are going to try to tolerate risk and see what’s possible. It’s a huge trauma. Maybe we will always talk about the pandemic.”

Even if the pandemic ceases to be front-and-center in their conversations, the OMfG co-hosts believe they’ll have plenty to discuss. “We have inherited a tradition that has what to say about different times of the year,” says Gubitz. “We’re lucky to be part of a centuries-old conversation, adding our wit and wisdom to it.”

Gordon describes the disappointment so many people in Massachusetts felt having to retreat into pandemic mode after fully opening up seemed possible in spring and early summer. “It feels like the pandemic continues to stumble along, and we continue to stumble along with it,” she says. “I am thinking about this Chanukah as rededicating ourselves to making it through to this other side. As we anticipate the announcement of vaccines for children ages five to twelve, it does feel like, who knows what possibilities lie ahead for Chanukah? And so, knowing what we know from the High Holy Days, how might we lean into Hanukkah as like an ‘almost-there’ moment? What does it mean to feel closer to the other side? Get a little bit more light each night, one candle, two candles, all the way up. We have a little more light this year than we did last year, and we’re not all the way there yet.”

Both Rabbi Gordon and Rabbi Gubitz use the podcast to humanize the role of the clergy and share the uncertainties they face in trying to meet their congregants’ needs, calm their worries, and answer their questions while still managing issues of their own. As Gordon puts it, the two have joked about “those moments when you start thinking, ‘Do my congregants think that I have some special secret door into a place that’s not the pandemic?’ Like, I’m living through the same pandemic. This is hard for us, too.”

Says Gubitz: “We like to skirt around the f-word lower case. We like to think about G, but also we talk about yoga pants and Doritos – a lot. And though it’s the 50th year of women in the rabbinate, even people who grew up in a world where there was a diverse sort of clergy are still saying, ‘You can be a rabbi? You don’t have a beard. You don’t look like the God I don’t believe in.’

“So I think the snark is also about showing people that Judaism and the folks who craft it these days are their peers, [with] some special training and wisdom. There’s this saying, ‘The Torah is not in the heavens’ – although podcasts are actually in The Cloud, so that doesn’t quite work. But basically, we’re among you.”

“OMfG Podcast: Jewish Wisdom for Unprecedented Times” is available on Spotify and other podcast-hosting platforms. Image courtesy of Jewish Boston.