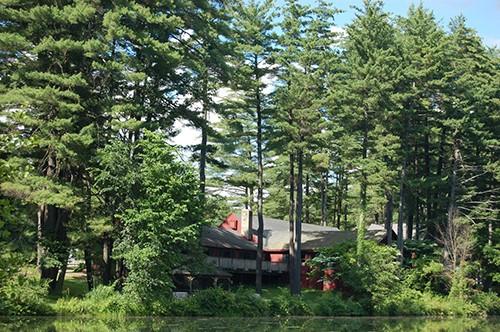 By Richard Slutzky / Special to the BJV

Well known for its annual bike rides in Israel (that’s how I got involved), Hazon promotes a diner menu of exciting programs, including JYCM,  the new Jewish Youth Climate Movement that educates and organizes Jewish high schoolers across the country to promote environmentalism in their communities; Adamah, a training ground for Jewish college-aged adults to learn about Jewish environmentalism; and Brit Hazon, a program encouraging individual Jews to make a personal commitment toward a more sustainable way of life.

Hazon has a close connection to the Berkshires. Just south of us, in Falls Village, CT, Hazon operates the Isabella Freedman Jewish Retreat Center (see photo above), which has been under Jewish communal auspices for more than 120 years. Originally purchased to offer recreation for women working as pieceworkers in the NYC textile industry, it later morphed into a Jewish Renewal retreat center for many years.

In 2014, Hazon took over the operation of the Isabella Freedman Retreat Center, refocusing its programming on Jewish environmentalism, with a healthy mix of spiritual and religious retreats attracting a broad spectrum of Jews from the culturally Jewish to Haredi Jews.  The retreat center became extremely popular during Jewish holidays, and its Sukkahfest was a regular sell-out, attracting hundreds of Jews of all ages from the Northeast and beyond. I remember attending a Sukkahfest in recent years and was pleasantly surprised by the diverse mixture of Jews – queer Jews, straight Jews, young and old Jews, Haredi Jews, and politically left, center, and right-wing Jews. All came together under an enormous Sukkah for lunch, thinking how nice it would be if we could only replicate this experience repeatedly – sharing time and learning from each other together.

My tenure as chair started in July 2019. We had hired new staff for national programming, for development, and a new executive vice president to assist our CEO. We were well-positioned to accomplish our goals! We had just completed a strategic plan earlier that year and were intent on bolstering our national programming, which included augmenting an initiative we call the Seal of Sustainability. It’s sort of an environmental Good Housekeeping Seal to encourage Jewish institutions to initiate steps to become more sustainable, like using solar panels, using compostable plates and utensils, and making sure that served food is not wasted or over-purchased. We were building upon our active presence in Detroit, where Hazon sponsored a major Jewish food conference and built an energetic staff there working with our Seal of Sustainability program in local synagogues.  We also began adding new board members from across the country to reflect our national ambitions and commitment.

Then COVID-19 hit. Running a retreat center like Isabella Freedman in rural Connecticut required significant support staff to operate the facility and provide programming, hospitality, and maintenance services.  We correctly anticipated that state protocols would mandate that we close the Freedman campus and took preemptive action. Sadly, we had to cancel all programming for the 2020 year and had to lay off more than 35 staff members – a terribly stressful outcome, but one we had to do in order to survive as an organization. Fortunately, our remaining staff was intrepid and began renting our facility to other leading Jewish organizations in the Northeast, allowing us to earn much-needed revenue to make up for losses from the shutdown.

Nigel Savage, the Manchester-born creative and charismatic founder of Hazon, made it known to the board and me that he wanted to step down after 21 years of service as CEO this September, the beginning of the Shmita year so that he could spend time in Israel and contemplate his next chapter. Thus began our search for a new CEO.

Jakir Manela, the current CEO of Pearlstone Center in Baltimore and a current board member of Hazon, threw his hat in the ring and also proffered the concept of a merger with Pearlstone. Jakir had spent considerable time as a young adult at Isabella Freedman and had gone through our Adamah Jewish farm training. Since Jakir spent his post-college life dedicated to Jewish farming and environmentalism – and was smart, articulate, well-liked, respected as a leader, and a very successful CEO at Pearlstone – we believed it was in the best interests of Hazon to explore the concept.

We formed an exploratory committee to meet with a similar committee from Pearlstone Center to see if a merger made sense. We looked at our respective missions and goals, finances, and staff, and it was clear this merger made a lot of sense, a synergy between two strong organizations.

Pearlstone Center has a magnificent 180-acre campus with forests, fields, meadows, and rolling hills. The Pearlstone leadership has done an excellent job building and running a Jewish retreat center similar to Isabella Freedman, with comfortable accommodations for up to 300 people. Their staff is very knowledgeable about hospitality and programming, complementing our existing staff with their strong skill sets.

Before finalizing with our boards, we quietly talked to our major donors and foundations about this possibility. What appeared to us as a great way to hire a new charismatic CEO while combining two strong, like-minded organizations into one definitely resonated with our funders.

As of August 1, Jakir will be Hazon’s CEO (as well as Pearlstone’s CEO) while both organizations work on legally merging, combining finances and databases, organizing staff, building esprit de corps among the staff. The merged entity will be known nationally as Hazon and in the Baltimore area, the Pearlstone name will remain prominent.

The new Hazon will have a $12 million budget and will employ over 100 employees. Our new home office will be at Pearlstone, but we will continue to operate Isabella Freedman and our Detroit offices.

As we witness the horrific drought conditions in the West and the immense impact of catastrophic flooding in Europe, plus other climate aberrations on a more frequent basis due to climate change, we are reminded of the fragility of our small planet and our responsibility as Jews to participate in tikkun olam – to literally heal the world. Even though the American Jewish community is proportionately small, we CAN make a difference, and we are compelled by our faith to make every effort to do so. And if not now, when?

Richard Slutzky, an Egremont resident, is a member of the board of Hazon, Construct Inc. of Great Barrington,  and the Jewish Federation of the Berkshires.