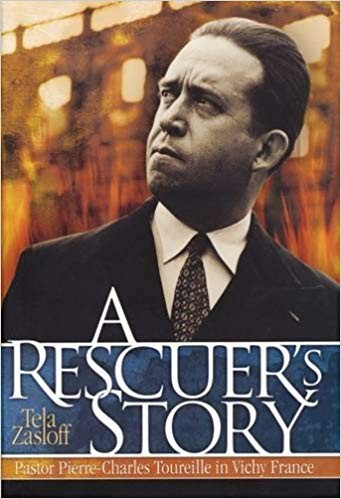 In 2003, author Tela Zasloff published A Rescuer’s Story. Pastor Pierre-Charles Toureille in Vichy France, which tells the story of a Protestant pastor’s heroic efforts to rescue Jews and other refugees during World War II.

Zasloff, who lives in Williamstown and is a member of Congregation Beth Israel in North Adams, first learned about Pastor Toureille’s exploits from family members who lived in the Berkshires. She writes: “The pastor’s son, Marc Toureille, who died a few years ago, was for his whole adult life, a resident of Williamstown, where he and his wife Micheline Toureille raised their family of two children, Pierre and Elizabeth, and were always active in serving the Williamstown community. Micheline is now living in Williamstown Commons, Pierre is living in Washington, DC, and Elizabeth in New Hampshire.”

This year, the publishing house PULM released a French-language version of Zasloff’s book, Histoire d’un juste. Le Pasteur Pierre-Charles Toureille dans la France de Vichy. She was invited by her publisher to speak about her work and the resonances that its historical message has when considering the refugee crises of the present day.

What follows are remarks that Zasloff delivered on November 22, 2019, at Université Paul Valéry in Montpellier, France.

I had been thinking about writing this kind of book for a long time because of a strong personal interest in how people act in times of national sickness when they and their fellow countrymen are oppressed by a draconian enemy, either from without or within. How much of our actions to help and save these oppressed others, is impelled by altruism, and how much failure to act is driven by self-preservation? Our national records as rescuers of our fellow citizens at such times is not impressive, as it was not in France during the Nazi occupation of World War II and as it is not today across the world, especially in the United States under our present president. Watching some of the fine French post-war films in the 1970s, I kept wondering how the country with a national motto similar to ours - Liberté, égalité, fraternité—could have cooperated with the Nazis to such an extent.

These questions came together when I first met Marc Toureille and his wife Micheline in 1994 in Williamstown, MA, at a 50th anniversary celebration of the WWII Victory in Europe. I recognized their French accent and spoke about my admiration for the Protestant villages in southern France that rescued many people from the Nazis. Marc interrupted me with, “My father was one of these rescuers.” That was the beginning of our friendship and eight years of collaboration on the book I wrote on his father, Pastor Pierre-Charles Toureille.

Pastor Toureille’s story helps us understand how such a man, in terrible times, becomes a rescuer, how much extraordinary courage and will and persistence he had to gather within himself to fight against what a collaborationist government in his own country and a substantial majority of its population were agreeing to under the Nazis. Suffering from defeat and occupation, many French saw the setting up of Vichy as a way to protect themselves from the worst of Nazi oppression so as to continue with their own daily lives, and as a platform of “moral rearmament” against the weaknesses, as they saw them, of their own democratic government. This meant cleansing their country of the invasion, as they saw it, of thousands of refugees trying to escape Nazi oppression, and confining them to internment camps so they wouldn’t make demands on an already traumatized and beleaguered native population. This meant establishing new laws, like the Statutes for Jews of 1940 and 1941, that separated these refugees into categories that deprived them of rights of ordinary citizens, ostracized them as sub-human, and made them ready targets for resentment and blame. This meant the mistreatment, deportation and killing of these refugees, and eventually also those native French who were considered undesirable.

This national attitude, during the war, was antithetical to everything Pastor Toureille believed about how to live and act. Those five years of the War, when he was in his 40s, were the high point of his life. He held several important official positions from which he could do his rescue work, first officially under Vichy and appointed by the French Protestant Church, as chief Protestant chaplain for all the internment camps in the south and as the head of several aid committees in charge of ameliorating conditions in the camps. The most important was his position as vice president, then president of the Committee of Coordination of Nîmes, an international group of multiple religious faiths that also worked with Vichy to ameliorate the conditions of the camps. He was the French liaison to The World Council of Churches in Geneva which was the main source of outside help to the camp internees. He also set up a Children’s Home and aid to Czech refugees.

Toureille’s rescue efforts turned clandestine as the Occupation progressed, and he established a wide-ranging network of Protestant pastors and lay people in southern French villages who cooperated in saving hundreds of people and in getting them across the borders to Switzerland, Spain, and Portugal. By the end of the war, one historian estimated that Toureille’s responsibilities covered a total of 40,000 people and that he was personally responsible for saving hundreds. Toureille and his wife and five children, and those who worked with him in his Chaplaincy, were in constant danger: He was interrogated seven times by the local Vichy authorities and by the Gestapo, but managed to hide the evidence of his clandestine network (kept mostly in his head; he had a prodigious memory) and avoid being imprisoned.

What kind of man is this? His religious faith and cultural history were the prime factors in shaping him as a rescuer. As a French Protestant, a Huguenot, he grew up with stories about his ancestors’ dealing heroically, for hundreds of years, with reactionary Catholic regimes that imprisoned and repressed and tried to convert them. When Toureille became ordained as a pastor in the Evangelical Reformed Church in 1925 he described his choice: “From the instant God said to me: ‘Come!’, I knew that he was also saying, ‘Go serve!’”

He was highly educated, an impressive speaker, and an internationalist, a man of the world. He obtained a Bachelor of Theology degree from the University of Montpellier, writing his thesis on one of his lifetime heroes, John Huss, the 15th century religious martyr and Slav national hero who was executed for speaking against Catholic Church abuses. His attachment to the Czech Republic and the Slav peoples lasted all his life. Near the end of his life, he commented on the appeasement betrayal of Czechoslovakia during the War: “May God forgive us for what we did to Czechoslovakia.” Toureille learned eight foreign languages during his work, in the 1930s, with Protestant church alliances across Europe, trying to cope with fanatical ultra-nationalism, particularly the rise to power of Hitler and Mussolini. Dietrich Bonhoeffer was one of his friends and colleagues in that work. His resistance to Nazism and his rescue actions are often described as part of “the spiritual resistance” in France.

The impression he made on others was powerful—his daughter-in-law, Micheline Toureille, describes him as intimidating and severe, with a commanding deep voice. He was obstinate, quick to anger and frustration, particularly in his not-always-genial dealings with the French Protestant Church, the Vichy authorities and his Swiss counterparts in aid to the refugees. But he gave hope to those he saved and was tender and inspirational in dealing with them, as shown especially in the narratives he wrote about them during and after the War.

The moral dilemmas he and others faced as rescuers must have been constantly on his mind: In choosing to spend their energies trying to ameliorate the conditions in the camps and collaborating with the Vichy authorities, were they normalizing and perpetuating the camps instead of fighting against their very existence? Did they make the right moral decisions in choosing which people to rescue, and so, by default, send others to their deaths? And two concerns specifically for a French Protestant pastor: Was he endangering the Church by putting it in the position of clandestine resistance to the government? And finally, the question that had faced the Huguenots for hundreds of years: How, in times of national political disruption, to choose between being a loyal Frenchman, following man’s law, and a loyal Protestant, following the higher dictates of God’s law.

Pastor Toureille did provide one answer to these questions about making choices. He wrote a tribute after the war to a friend, R. R. Lambert, a French Jewish aid director who perished with his whole family at Auschwitz. Toureille could have been referring to himself because of the bond he felt with this friend. Both men had dual loyalties to religious and national identities; both chose to stay in France and resist the Vichy and Nazi programs of genocide although provided the opportunity to escape; and both inspired others with the courage to take risks for a just cause.

“It is because of men like Lambert that many Christians, of whom I am one. . .took to heart his defense of the Jewish cause, to the point of risking their lives and the lives of their families. Because human beings everywhere and always will devote themselves to causes that certain ones among us have identified with, and lived. It is because the memory of such men remains so vivid and survives in spite of time passing, in spite of everything, yes, in spite of everything—that some of us would be ready again to run the same risks, and others, too, if necessary, in defense of the Jews.”

Tela Zasloff is the author of Saigon Dreaming, Restoring Vision, Tsiveh Gordin/Sylvia Berman, and The Horsehead Nebula. A Memoir. She lives in Williamstown.