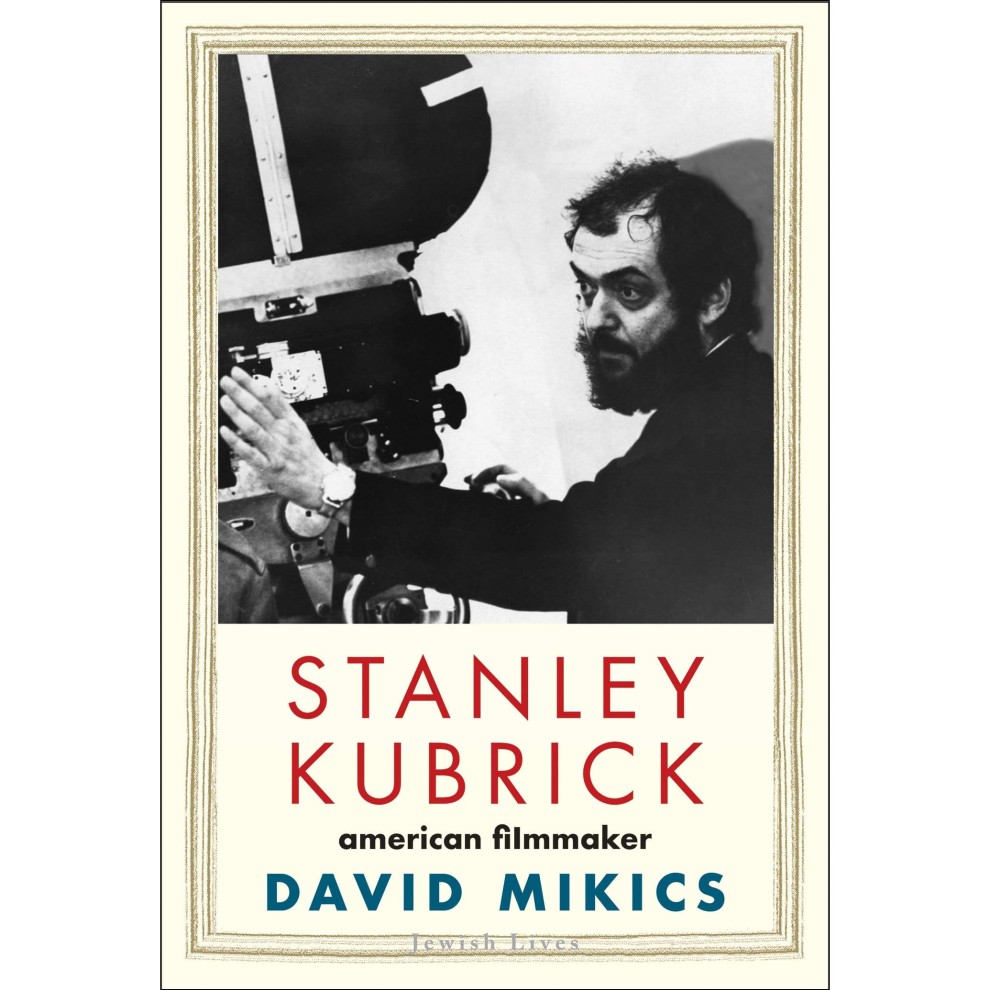 Stanley Kubrick: American Filmmaker by David Mikics is a recent and worthy addition to the excellent “Jewish Lives” series of short interpretive biographies published by Yale University Press. Nevertheless, I came away from it wondering how “Jewish” Kubrick’s artistic sensibility really was, even though, in the book’s introduction, Mikics asserts that he “was a Jewish director, though he never would have said so.”

I think Mikics comes closer to the mark when he writes that Kubrick had a European side and cites critic Michel Ciment’s observation that Kubrick’s sensibility “comes from eighteenth-century Europe, which dreamed of reshaping humanity along strictly rational lines. From Dr. Strangelove to 2001, A Clockwork Orange, and Full Metal Jacket, he is fascinated by schemes to radically manage or transform human nature. Kubrick, like the Enlightenment philosophers, knows that the schemes all fail, since reason turns out to be dangerously extremist, and therefore irrational.”

I also came away from the book wondering how much of a “life” it is. Most of its pages are devoted to Mikics’s analyses of Kubrick’s films, which is likely to be confusing and perhaps meaningless to a reader not familiar with the movies – although there was a time when every discerning moviegoer certainly was. Maybe it’s the best approach for a biographer to take with Kubrick, an obsessive who was consumed by his work, a control freak in complete command of the entire filmmaking process from the grand vision down to the minutia. If Kubrick’s films were about “mastery that fails…perfectly controlled schemes that get botched,” as Mikics puts it, the films themselves reflect an exactingly precise mastery of the medium.

Which is not to say that Kubrick’s life was anything less than amazingly colorful. Born in 1928, he grew up an intellectually voracious but antsy “misfit” (his description) on the Grand Concourse in the Bronx, son of a physician who wanted him to follow a conventional life path and a mother who encouraged him to pursue his ambitions. At a young age, his parents gave him a camera – by age sixteen, he was working for Look magazine, a bi-weekly photo journal that focused on grittier aspects of life than its more wholesome rival Life. Mikics incisively describes Kubrick’s photographic style as “stark and clean, foreboding in its precision,” conveying “a sense of closed-off emotional trauma.” Much less known than his film work, young Kubrick’s photographs display an observational style already fully-formed and chilly, and I think it’s likely he would be remembered as a top-notch lensman had he pursued that career.

Married at twenty and quickly divorced, Kubrick lived a bohemian life in Greenwich Village, immersing himself in the neighborhood’s intellectual subculture, watching scores of Hollywood and art house movies, and earning extra money playing chess for quarters as “the fifth- or sixth-best player in Washington Square Park.” Still in his early twenties, he made two short films and his first feature – what we would now consider “indie” productions. Working closely with his second wife, the dancer Ruth Sobotka, he made his first mature feature in 1955, the film noir Killer’s Kiss, which Makics describes as having “makeshift quality influenced by New York school photography and cinema verité.” It unfolds in a kinetic 70 minutes and is also the only Kubrick film that has a happy ending, though a somewhat squalid one – the washed-up boxer gets the girl, who has been a taxi dancer in a sleazy nightspot (which Kubrick stages perfectly, as if bringing some of his photographs to life). “There is something off about them,” writes Mikics, “in the same way there is something off about certain people you know.”

Kubrick’s next film was another enjoyable noir, The Killing, about a doomed race track heist, and the one after that the director’s first masterpiece, Paths of Glory, about a doomed French army assault on a German stronghold. Then came the Hollywood blockbuster, Spartacus, about a doomed slave revolt, followed by Lolita, about a doomed (and wholly inappropriate) relationship, followed by Dr. Strangelove, in which life on Earth is doomed by mutually-assured nuclear destruction.

You get the idea –the plots of Kubrick’s films, whether set in the 18th century England countryside or in the 21st century near the planet Jupiter, all follow one arc. The surgical mercilessness with which he dispatches his characters to their fates prompted many critics to describe his movies as cold and remote. Philosophically, a film that is “cold” doesn’t bother me but, truth be told, aside from the early noirs, Paths of Glory, Spartacus, and A Clockwork Orange, I don’t really “like” Kubrick’s movies. I admire the artistry, but they kind of bore me – not only the famously snooze-inducing historical drama Barry Lyndon, but even The Shining and Full Metal Jacket. Dr. Strangelove I find boring and not funny, though Mikics holds that its “smart-alecky black humor…aligns [Kubrick] with Lenny Bruce, Joseph Heller, and the sacred-cow bashers at MAD” magazine. (Actually, I remember the MAD spoofs of Kubrick films, and they all proved ripe for parody because they were so self-serious.) I also find 2001: A Space Odyssey, which Mikics ranks as one of the two greatest films ever made, excruciating to watch. After reading Mikics’s exhaustive analyses of Kubrick’s oeuvre, I understood and perhaps appreciated the films better, but I didn’t “like” them any better.

Kubrick’s last project, Eyes Wide Shut, was inspired by the Viennese writer Arthur Schnitzler’s Dream Story, a novella that had obsessed him since he was in his 20s. His collaborator on the screenplay was the British novelist Frederic Raphael, who ultimately “bristled at Kubrick’s determination to turn this story by a Viennese Jew into a non-Jewish film,” writes Mikics, “and thought, rather unfairly, that Kubrick was trying to escape from his own Jewishness.” One could scarcely de-Judaize a story more effectively than by casting, as the director did, Tom Cruise and Nicole Kidman as his lead actors. Mikics explains that “Kubrick insisted that Raphael eliminate all traces of sparkle from Eyes Wide Shut’s dialogue,” reminding me of the way another Jewish director, Woody Allen, used a WASPy cast in the meticulously unfunny Interiors, his first “drama.” Did both directors feel that if they were to achieve the seriousness they aspired to, they had to set their dramas in a non-Jewish context?

Kubrick’s sensibility was European and genuinely highbrow. Its American aspect was, as Mikics puts it, that Kubrick “wanted to do more than make rarified art house films. His goal was to speak to mainstream America, and he reached it by making the art house sensibility mainstream.” As Mikics shows, Kubrick remained gripped by Jewish ideas throughout his career, although projects about Jewish themes never came to fruition. One reason why is hinted at in what may be the most Jewish moment in Stanley Kubrick: American Filmmaker:

In 1976, Kubrick [asked] Isaac Bashevis Singer to write a screenplay about the Shoah. The famed Yiddish storyteller admired Dr. Strangelove and Barry Lyndon, but [responded] that there was only one problem with his writing a script about the Holocaust: he knew nothing whatever about the subject. When Kubrick heard this…he commented: I know just what he means.

So why review a book about a great filmmaker whose life was not typically “Jewish” and whose films were not “Jewish” at all? Maybe because that ends up being kind of “Jewish,” too. Another reason I alluded to earlier – I’m just old enough to remember when the release of a new Kubrick film was heralded a Major Cultural Event, and if you were earnest and culturally-minded, you probably trotted down to your local cinema to grapple with each one whether you “liked” Kubrick or not.

The films were touchstones for those of us of a certain age – everyone had seen them and had opinions about them. And we experienced them as an audience in a movie theater, the environment in which Kubrick meant them to be seen – he was even meticulous about how his films would be screened. As I write, everything is still shut down, including the movie theaters. Since you have the time, consider revisiting or introducing yourself to Kubrick’s work by binge-watching the master’s movies instead of whatever it is that Netflix is serving up. If you do that, Stanley Kubrick: American Filmmaker by David Mikics would be a fine resource to have on hand.