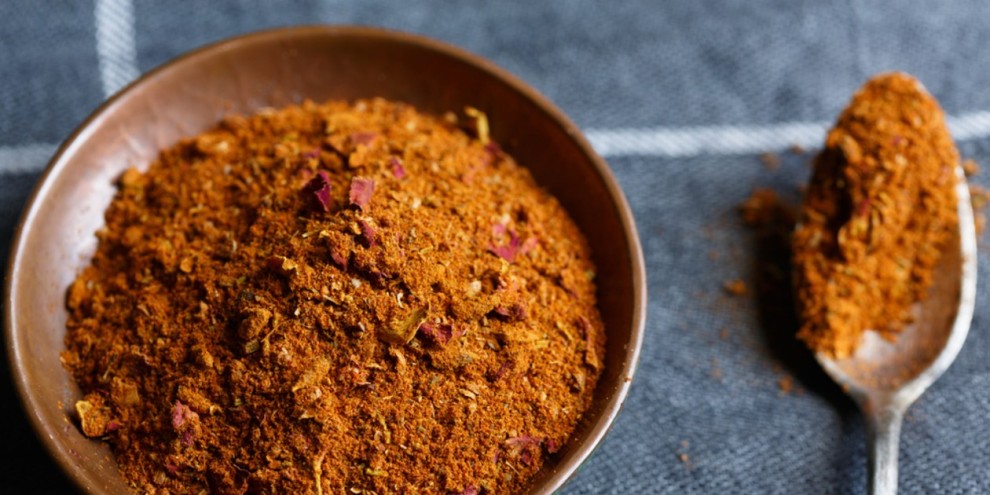 It's summertime and the livin' is easy, but we still have to eat. Do we really want to be in the kitchen cooking heavy meals? Experts tell us that we should be eating clean (i.e., unprocessed) foods, and light and healthy meals are just the ticket for the season. The easier they are to prepare, the more likely we are to try something new.

The "something new" in this article is ras el hanout, one of the variety of spice blends brought to Israel by immigrants from around the world, in this case from North Africa. The name is Arabic for "head of the shop," and refers to the best spices available in the spice trader's store. In Morocco, the spice blend carries the moniker "lazy cook's spice" as it is used in dishes ranging from broth to tagines to rubs. It is beloved, and for good reason. The aroma alone will make you swoon.

While ras el hanout is available in Middle Eastern groceries, you can also make your own. As with other spice blends we've discussed, from baharat to hawaij, cooks have their own favorite recipes, and they don't share them. The mixtures I've seen tend to include a combination of cardamom, cloves, cinnamon, coriander, cumin, paprika, mace, nutmeg, peppercorns, and turmeric, but they can include up to fifty different spices.

Ras el hanout is so much a part of Berber culture that there is even a legend about how the spice blend came to be. As the story goes, there once was a despotic sultan who made unreasonable orders of his servants, and punished them cruelly if they failed to deliver. One day he sent one of his servants to the market for spices. Unfortunately, the sultan's wife also sent him on an errand, so by the time he reached the spice shop he was frantic and out of breath.

The spice trader asked him what he wanted, but the servant was breathing so hard that he could only croak out the words, “Please, sidi, just give me a little of everything."

Wanting to accommodate the customer's wishes, the spice trader put a tiny bit of every spice he had into one large packet. When the servant brought the packet of spices back to the cook, the cook went into a frenzy, worrying about what he could possibly make with the mess of spices, and knowing that both he and the servant would be punished severely if dinner wasn't delicious and on time. He added a pinch of the mixture to the pot and prayed.

When sultan smelled the aroma coming from his dinner, he was suspicious and growled, causing the servant and cook to tremble in fear. But then the sultan took a taste of the dish. Then he took another taste, and yet another.

"This is the best couscous I have ever tasted!" he proclaimed.

In relief, the servant collapsed on the floor.

From that day on, the sultan demanded that his food be flavored with ras el hanout.

I think you will enjoy these fish kebabs, redolent of the Moroccan souk.

Place the ground fish into a medium bowl.

With gloves or oiled hands, knead the mass until it combines and holds together, but don’t over-knead or the fish will be chewy.

Dampen your hands. Divide mixture into 8 portions; shape each into a kebab form, like a small egg. Heat a thin layer of olive oil in a medium skillet over medium heat. Cook the kebabs until golden on all sides, 4-6 minutes total, turning until colored on all sides and cooked through.

An Israeli Treat for "Afters"

And then there's dessert. A platter with a selection of melons and berries is just the thing to lend a light ending to a summer meal. But if you need something with a bigger sugar punch, I recommend a treat that I enjoyed while living in Israel: ice café. Not your standard iced coffee, this was a singularly creamy and delicious drink enjoyed with friends at a sidewalk table outside the Strauss Milk Bar on King George Street in Jerusalem.

There's no formal recipe for ice café that I can find, but who needs one? It takes all of two ingredients: coffee and vanilla ice cream — but be sure that the frozen treat you get is of the best quality.

Pour hot coffee into a tall glass (to make it authentic, the glass should have a handle) and place it on a plate.

Drop a large scoop of the ice cream into the glass.