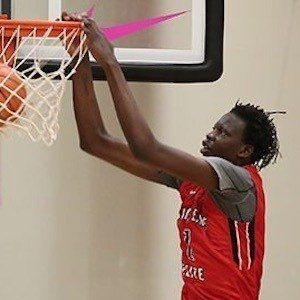 By Albert Stern / Special to the BJV

Note: This story is dedicated to Bob Rosenblatt, a friend to so many in our community. May his memory be a blessing.

A few years back, my son, Eliot, took to asking me if I had ever heard of the basketball player Bol Bol. I told him I heard of Manute Bol, and Eliot said Bol Bol is his son, who was then still in high school. “He’s actually great,” Eliot assured me — he followed Bol Bol on Instagram, and is also an avid watcher of websites that post videos of basketball greats past, present, and future. Apparently, Bol Bol — from Sudan and five inches shorter than his father at 7’2 — has been a hero to a legion of 11-year-old boys since he was a teenager.

Over time, Eliot asked me multiple times if I knew who Bol Bol was. Either he forgets having spoken to me about Bol Bol, or just uses it as an opportunity to hear me talk about the times I saw Manute play, just as he enjoys when I repeat the same tales about seeing Dr. J, Magic, Kareem, MJ, and Larry Bird in person. I can tell that he envies all the great sporting legends I’ve watched play, and though I assure him that he’ll have his own chances in time, I don’t think he quite believes me, living as far as we do from any professional sports franchises..

So it was Sunday, January 14, 2018. A friend’s family was supposed to take Eliot to the Hoophall Classic in Springfield, an annual three-day extravaganza of high school basketball games that brings together the best teams and players in the country. At the last minute, however, the friend called to say he was sick and couldn’t go. My son was crushed, and I was kind of disappointed, as I was hoping for a free day to run errands and be sullen. I was wondering what to do with Eliot when my wife Rachel, calling from work, suggested that I take him to the basketball games.

“Me?” I asked. It had never crossed my mind. In terms of my personal sedentary disgruntlement with the world and everything in it, on a scale with 1 being “Cool, let’s do it!” and 10 being “Get offa my lawn, you rotten kids!”, I’m at about a 6 or 7 most days, so when I asked Eliot if he wanted me to take him, his first reaction was to say, “You?”

About an hour later, we were on our way, me full of dread about the crowds, the drive, the parking, what we were going to eat — because dreading and mulling and dwelling about all I dread is how I move through the world. And grousing — did I mention the grousing? (Did I have to?) En route, we stopped to see Eliot’s grandfather at the assisted living facility in Lenox. As usual, my father-in-law was surly and non-communicative although, as usual, his tablemate in the dining room, 96-year-old Bob Rosenblatt, was thrilled to see us.

When we told him that we were heading to a basketball tournament, Bob exulted: “That’s AMAZING! What FUN you’ll have! What a SPECIAL, EXCITING day! ENJOY IT YOU TWO!”

I felt shamed, shamed by a near-centenarian possessed with a font of compassionate understanding I doubt I could accrue even if I lived for another 40 years and tried hard. I was so ashamed that when Eliot and I got back in the car, I apologized for being such a pain in the tuchis and told him I was happy to be going. And I really was happy — that’s how Bob Rosenblatt’s magic worked.

We got to the gym at Springfield College — packed to the rafters with rabid hoops fans, college scouts, coaches, and “yoots.” Someone pointed out Knicks great (and Georgetown University coach) Patrick Ewing, and soon after we found some seats in the third row, we saw University of Kentucky coach John Calipari settling in. This event was clearly a huge deal if he was there. We bought a program, and on the inside front cover, the top players were listed.

Among the “Best of the Best” was a picture of…Bol Bol.

Eliot and I looked at each other — No! Nooooo. No way no way no way. We tore through the program — Bol Bol would be playing in the third game of the afternoon.

The anticipation leading up to Bol Bol’s game was almost unbearable. We witnessed some great basketball — the kids are amazing, the best of them already dunking like pros. Eliot loved it, and I plugged into the part of me that was once passionate about sports stuff, but that now passionately wants you to get the hell offa my lawn. The buzz in the stands was all Bol Bol. Bol Bol. Bol Bol.

When the 3:30 game ended, the court cleared and seemingly all the 11-year-olds in attendance pressed around courtside, waiting for Bol Bol to come out. And suddenly, there he was, all 7 foot 2 inches of him — and he wasn’t even the tallest guy on the team. He had a 7’3” teammate, a spindly white guy who Eliot could probably box out of the paint.

Watching people gawk at Bol Bol, I wondered what it felt like to be inside that body. Naturally, I came up completely blank. No doubt the center of attention in any room he has ever been in or will be in, Bol Bol seems bemused by the attention, and already capable of maintaining a psychic wall between himself and the people who want something from him — an autograph, a high five, a glance of recognition. His famous dad might have prepared him for the ride he’s now on. In any case, his poise was remarkable.

I gave Eliot my pathetic Tracfone and told him to take some pictures of Bol Bol. He went off for a few minutes, then came running back.

“He shook my hand and looked me in…the…eye.”

“Where did you see him?”

“As he was leaving. I started shouting ‘Coach K! Coach K!’ and he came over to me and shook my hand!”

“But Eliot, that’s Coach Cal! Coach K is the guy at Duke!”

“Alright!” And Eliot ran back to take more pictures of Bol Bol.

Bol Bol looks quite like his dad, and as play started, seemingly had the same game — standing around, taking up space, looking a little out of it. But unlike Manute, Bol Bol has soft hands and, when he gets the ball around the basket, an explosive step to the rim, which is about one foot above his outstretched arms. He made me think of a caiman you might see on the nature shows — barely moving, shifting his eyes back and forth until the gazelle gets a little too close to the watering hole and then a BOOM flash of mayhem ending with the gazelle between its jaws. But in addition to the vicious dunks, Bol Bol has a sweet touch from middle range and moves well, plus he made all of his free throws. He’s got game.

The crowd went nuts after each play Bol Bol made, all except for the group of “yoots” Eliot and I were sitting among, who were studiedly nonplussed by the show, too cool to jump up and down screaming like we were.

Until the last dunk. Bol Bol was standing just about outside the paint when he got the ball and delivered a thunderous windmill slam — I don’t know, but it was as if we had just seen something that could not have actually happened. Could NOT have actually happened. The arena erupted, and even the too-cool “yoots” sitting next to us all linked arms and started chanting Bol Bol’s name.

When Eliot and I were waiting for the car to warm up as we headed home, he said to me: “Dad, I think this was our best day ever.” I told him whether that was true or not, it was certainly a good day to have been us.

We stopped for hamburgers on the way home and talked about how when we woke up in the morning, neither of us had any idea we would be seeing Bol Bol, but how some days you get out there into the big wide world and you do see Bol Bol, and that’s what makes life great. Absolutely. Just great.