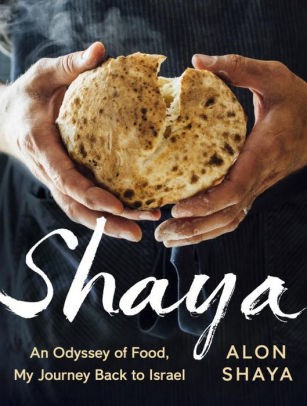 Although his eponymously named book purportedly brings chef Alon Shaya back to his roots in Israel, most of the recipes in it come from every place else he has worked. And Shaya doesn't set up his cookbook up in the usual manner, starting with appetizers and proceeding through soups, salads, entrees, and desserts. No, he takes us along with him as he has traveled the world, cooking in places as diverse as Italy and New Orleans. It's only in the last chapters that he finally comes home to Israel.

Be forewarned: There's a lot of treyf in this book (e.g., Kugel in Crisis, made with 10 ounces of bacon). Luckily, there were enough recipes to sample in order to do a decent review.

Despite the unusual plan of the book, I started with appetizers, and chose one that Shaya says reminds him of his grandmother. Lutenitsa is a Bulgarian relish made of tomatoes and roasted eggplants and peppers. Often served as part of a mezze platter, this recipe calls for only eight ingredients, but the eggplant and peppers all need to be charred to within an inch of their lives. Shaya instructs the home cook to hold the vegetables over a gas flame for about 45 minutes. Who has time for that? I roasted them under a high broiler flame and rotated every 10 minutes. It took a lot less time and the results were identical. The lutenitsa was delicious served with pita, hummus, and falafel.

You may recall that in the last issue I mentioned that one of the latest food fads in Middle Eastern and Mediterranean restaurants is a roasted whole head of cauliflower, and I recommended Yotam Ottolenghi's. His was both simple to make, as befits a cookbook entitled SIMPLE, and delicious. Shaya's Whole Roasted Cauliflower with Whipped Feta involves many more ingredients, but then he doesn't present his cookbook as being easy. His cauliflower head isn't just boiled in water; it bathes in a broth of water, wine, herbs, lemon juice, olive oil, and butter. And it's served not with a simple green tahini, but with a sauce that includes feta cheese, goat cheese, and cream cheese. However, the proof of this pudding is that Joel (who actually cringes at the word "cauliflower") is on record as having uttered the following words: "This is surprisingly good." What higher praise could there be?

Heads-up: The sauce recipe makes enough for four or five heads of cauliflower, so you may want to cut it down – or host twelve people for dinner with this as the appetizer. Just tell me what time to be there.

Another classic Israeli dish is labneh, but because I like to try different chefs' recipes, I figured I'd give this one a go. Shaya's is rather bland, but after adding chopped scallions, the flavor began to pop.

A clever twist on a classic bread and egg recipe, Za'atar Toad in the Hole is an easy dish to prepare. It is also so good that it can serve as the star at Sunday brunch. A mixture of mayonnaise and za'atar infuses the toast, providing a lovely little nest for fried eggs. A tomato-scallion relish adds a tangy topping.

Charred Cabbage with Olive Oil is a very nice side dish, and fairly easy to prepare, although it does require steps. Like the cauliflower, a whole head of cabbage is first boiled in a broth, then it is cut into wedges and broiled until charred.

For a main dish, I tried the Curried Sweet Potato and Leek Pie. The yogurt in this savory pie made it a much lighter quiche than one would get using heavy cream, and the combination of leek, sweet potatoes, ginger, and Romano cheese was delicious. The addition of hawaij, a Middle Eastern spice mix, gave it a decidedly Levantine vibe. Fair warning: there is significant variance in the hawaij recipes found among chefs, but all make large quantities, so I advise you to prepare them in small batches to find one you like, before going big.

And of course, we need dessert. I chose to bake Cherry and Pistachio Cookies, mainly because I happened to have all the ingredients in the house that day. But, for all the flavorful ingredients called for (cinnamon, pistachios, dried cherries), I found these biscotti-like cookies surprisingly lacking in flavor. Perhaps the addition of almond extract would provide the much-needed punch.

Za'atar Toad in the Hole

It's summertime and living should be easy in the kitchen. Try this twist on the classic breakfast dish. It would even be great for a light dinner, served with salad.

Maldon or other flaky sea salt, to finish

Combine the tomato, scallions, olive oil, lemon juice, and kosher salt in a bowl. Set aside.

In a separate bowl, combine the mayonnaise and za'atar, and spread evenly over both sides of each slice of bread. Use a cookie cutter or a knife to cut a 2-to-3-inch hole in the middle of each slice. Discard the rounds, or keep them to fry with everything else.

Melt the butter in a large cast-iron or nonstick skillet over medium-high heat. Once the foam subsides, add the bread.

Crack each egg into a bowl, then carefully tip each into the center of a bread slice. Do this in batches if you need to — leave plenty of space between the slices of bread so that you can flip them. Leave alone for 2 or 3 minutes, until the bottom of the bread is nicely browned. Use a thin spatula to loosen any stuck-on edges, then flip, and cook for another minute, just until the egg white is set. Once the bread is out, if you like, fry the removed rounds, about 1 minute per side, and keep them to serve atop the toast.

Spoon the tomatoes and scallions over each piece of bread, draining off any excess juice. Sprinkle a bit of flaky sea salt over the top, and eat right away.