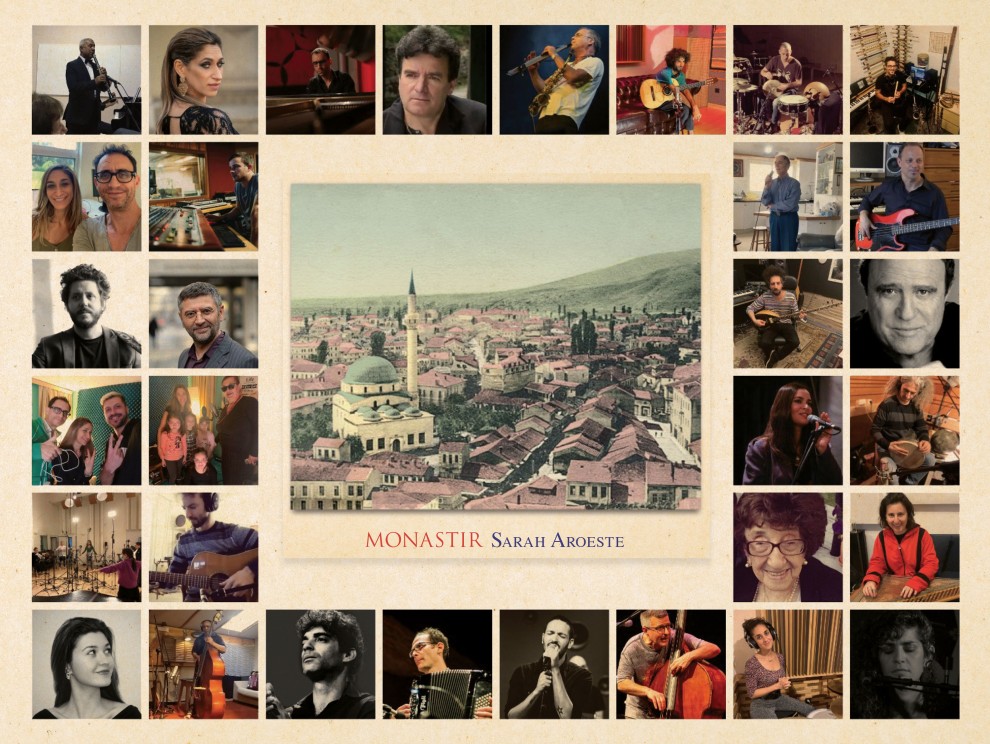 Only in America – someone who is both a “national treasure” in the Republic of Macedonia and the South County community coordinator for PJ Library of Berkshire County.

It’s a rare feat, yet one that the Berkshires' Sarah Aroeste – recording artist, children’s book author, and ambassador for all things Ladino – has accomplished. This summer, her star status in the central Balkan nation seems destined to grow with the release of her new CD, Monastir, a sonically lush and visually compelling labor of love that celebrates the city where her ancestors lived for centuries before the family left for the United States in the early 1900s.

The history of Macedonia’s Sephardic Jewish community – its first arrivals coming after the expulsion of the Jews from Spain – is rich, romantic, and ultimately tragic, with nearly all its members wiped out during the Holocaust. (Approximately 250 Jews live in Macedonia today.) Almost single-handedly, Aroeste reawakened the nation’s memories of its lost Jewish population with a 2017 performance in Bitola, which was called Monastir when it was part of the Ottoman Empire.

As Aroeste shared in an article she wrote for the BJV in 2018, she was overwhelmed by the way her standing-room-only concert at the Bitola Cultural Center was organized by non-Jewish Macedonian enthusiasts of her music and heritage. “To say that I received a homecoming welcome would be an understatement,” she wrote. “I had never felt as appreciated as I did when I was in Macedonia. The people there are in love with their Jewish history. Not because they hold a collective guilt for past wrongs, but because they miss Jewish life and believe it added so much to their history. They want it to return.”

As exhilarating as that first Macedonian reception was for Aroeste, she says she wanted to make sure the experience “wasn’t just a fluke.” Soon after returning to the Berkshires, she connected with Joshua Bloom, husband of Hevreh of Southern Berkshire’s Rabbi Jodie Gordon (and Federation vice president), who had done human rights work in Macedonia from 2001-2004 and was slated to return as an international monitor of the country’s upcoming elections. Inspired by their shared enthusiasm for the Balkan nation, Aroeste and Bloom organized a tour that brought 20 Americans to Macedonia.

That visit was capped by another standing-room-only concert by the singer in Bitola, which was attended by the ambassador to Israel and local dignitaries. The turning point in how Aroeste saw the potential for a larger project came at a rooftop afterparty at a local club. “We had a celebration on the roof of this joint in the center of town, and a lot of people came out afterward,” she remembers. “I caught it in a photograph where you could see a whole bunch of musicians and people dancing together. In this one shot, you see Macedonians, Israelis, Albanians, and myself – you know, the American. There were Jews, Christians, and Muslims all in this one snapshot –  I looked at that photo afterward, and I thought, oh my gosh, I need to do something to harness this cooperative feeling that we all have. And the best way I can do that is with music.”

Aroeste also carried a heartfelt personal motivation for The Monastir Project – to honor her cousin Rachel, who is 103 years old and her last surviving relative born in the city (and who is among the 2 percent of the Jews who survived World War II). “She is an absolute miracle,” says Aroeste. “And before she dies, quite honestly, I want to leave my mark for her and dozens of Monastirli [Jews], so they can have something physical that they can listen to or hold in their hands for posterity so that they know that the memory of this community lives on.”

Aroeste says she wanted the packaging of the Monastir album to have a tactile quality that conveyed something of the way she inherited her family’s experiences.  “In the song I wrote (“Mi Monastir”), I used very, very specific memories from my grandfather and from my cousin Rachel – the textures of their stories and the smells of the foods they cooked, and the descriptions they used to give me. I knew that I didn’t want this to just be a ‘functional musical experience.’ Sadly, most people don’t even bother with liner notes anymore because everybody downloads their music. For me, the liner notes are so critical to understanding more intellectual, esoteric albums, especially ones that are not in English, and I put so much effort and pride into the research and the storytelling behind the songs.”

She worked with Israeli-American graphic designer Amos Funk who “understood the vibe. I knew I wanted to use old postcards as my backdrop, and he had the idea of using fonts that would be like a handwritten note. I wanted to punctuate it with real images of Monastir and of my family and of different memories.”

I found that the most enjoyable way to listen to Monastir is first to read Aroeste’s excellent introduction and then keep the visuals in front of you – each track has its own page that captures something of the spirit of the song. The translations and the transliterations of the Ladino, Macedonian, and Hebrew lyrics take you deeper inside the song, and the visuals, in particular, have the effect of drawing you deeper into the musical sound while connecting you with the people and places shown in the photographs. One can imagine the people in them responding to the same melodies – the images of the city and its surroundings let you peer into their world. Particularly moving is the image of the family mezuzah on the lyric page to “Mi Monastir” – as the family of Aroeste’s cousin Rachel was taken away in 1943, a neighbor removed that mezuzah hoping to someday return it. Years later, as Aroeste describes in her essay, it was given back to Rachel.

Creating a song list that would fulfill her vision for The Monastir Project was another challenge, and Aroeste drew on the connections she made with musicologists, preservationists, musicians, and archivists around the world in the years she has worked as a singer and student of Ladino music and Judeo-Spanish culture.

The global pandemic disrupted her plan for the recording, however. In March 2020, Aroeste and her Israeli producer/arranger, Shai Bachar, had arrived in Macedonia to work with Balkan singers and musicians, unaware that the US borders were soon to be closed.

“We knew the danger, but it hadn’t exploded until probably five days later,” she says. “I was one of those people who was caught in Europe when Trump closed the borders. So my poor husband (Jeff Blaugrund) was frantic trying to get me home, but I told him loud and clear, of any country in the world I would feel safe being stuck in, it was Macedonia because I have so many friends and I feel so much protection from the government there. I’m like - and I say this without ego – a national treasure. They would never let something happen to their Jewish Sephardic daughter.”

Aroeste and Bachar scrambled to finish their recordings in Bitola and the capitol, Skopje, in a four-day period. The musicians and singers were prepared, having received charts and “scratches” (stripped- down studio versions of the arrangements and backing rhythm). Aroeste and Bachar recorded some of the most special songs on the record: “En frente me tengo,” its Ladino lyrics sung by 18-year-old Jewish opera star Helena Susha, and “Estreja Mara,” an anthem in Macedonian for schoolchildren honoring a 21-year-old Jewish resistance fighter who died fighting the Bulgarian army in 1944. A choir of kindergarten students performs the version captured on Monastir, which includes an introduction by cousin Rachel, who was recorded reciting a Sephardic finger game to one of Aroeste’s daughters.

Aroeste and Bachar then returned home, she to the Berkshires and he to Israel. It soon became apparent that the recording sessions lined up in Israel would not happen, and so Aroeste had to adapt. Like many other musicians, she built a soundproofed home recording studio in order to keep working.

The pandemic had a dire effect worldwide on the livelihoods of musicians who could not record together or perform live – and Israel was one of the first countries to completely shut down. “For months and months before anybody else, [Israeli musicians] were just sitting at home with nothing to,” says Aroeste, confessing somewhat guiltily that, “I have to have to say it was really helpful. Because so many musicians were bored out of their minds and they just wanted to do things, we were able to get musicians, quite frankly, we would never have been able to get in any other circumstances.”

Well-connected in Israel’s music scene, producer Shai Bachar was able to round up a formidable roster of Israeli talent, including iconic vocalist Yoav Gaon, who sings the traditional Ladino “Jo La Keria,” a lament for a departed lover with echoes of the loss of Monastir’s Jewish community. Aroeste says that as awareness of The Monastir Project spread among Israeli performers, many wanted to be a part of the recording because of their connections to the history. In the end, the music and vocals were recorded in five countries by 32 performers – and were put together by Aroeste and Bachar largely in the Berkshires.

Bachar, who has dual US and Israeli citizenship, arrived in August 2020 to finish the album at Aroeste’s home studio. When I asked Aroeste what it was like recording her vocals – very emotional, very dramatic – without a backing band from which she could draw energy, she answered: “It really was a challenge. I didn’t feel comfortable doing it just by myself. It was a very disjointed way of doing things, so I really put my trust in Shai. He would record all of the percussion of some of the songs first, and then he would go to the bass, and then he would fill it in with woodwinds. So each song was constructed from the ground up because we had to do it in such a piecemeal way. And it doesn’t have that same live recording vibe, but it also gave us the chance at every step to really take that step back and say, ‘Is this the right feeling of this song? Is this how we want to move it forward?' And we could not have done that if we were in a live studio. So it did have some benefits in that we could really take each song step-by-step.”

Aroeste adds that working that way helped her achieve her goals for the album, and what will continue as The Monastir Project. “The international cooperation part of it was central. That is what gives me such meaning about the project, that we had so many hands be a part of it – Jews, Christians, Muslims, Macedonians, Israelis. That was the point of the project.

“It wasn’t just musical homage, it was meant to be the opening of cultural dialogue to help preserve the stories of Jewish Monastir. And I think working piecemeal in some ways helped that, giving that much more meaning to the dialogue part of it.”

Monastir can be purchased at saraharoeste.com/store.