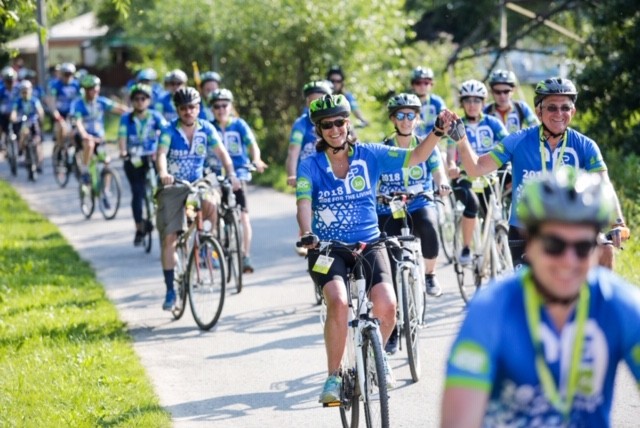 By Sandy Ashendorf / Special to the BJV

In 2016, my husband Ron and I were planning a trip to Eastern Europe that included a few days in Krakow. As the trip neared and we were putting last-minute touches on our itinerary, we were told to make sure to have Shabbat dinner at the JCC Krakow. “There’s no JCC in Krakow,” was our collective response. How was it possible that the city that Hitler sought to make Judenfrei had enough Jews to support a Community Center? Who was there to attend Shabbat dinner? Where was this mythical place an hour’s drive from Auschwitz?

When we walked into the JCC Krakow, we were overwhelmed. There were about 200 people in attendance that night – a fairly average showing for an early spring weekend. Kibbitzing in a sometimes incomprehensible mix of English, Hebrew, Yiddish and Polish, the crowd ranged in age from college freshmen visiting from the United States to Mr. Mundick, a nonagenarian Holocaust survivor who had returned to Krakow after he was liberated from the camps and, as best he could, picked up the life he had begun before the war.

Scattered about the room, serving food, cleaning plates, and generally making sure the evening ran smoothly were the thirty or so Polish Christians who comprise the volunteers and staff at the JCC. Gen-Xers and Millennials, they grew up long after World War II and Communism had forever changed the world. They sensed something missing from the Poland that had existed for 1000 years until the mid-20th century – Jews and Jewish culture. Together with Jonathan Ornstein, the founder and executive director of the JCC Krakow, this dedicated group continues hard at work to ensure that Krakow’s future is one that definitively includes Jews.

It was at that Shabbat dinner that we learned about Ride for the Living, a 60-mile bicycle ride from Auschwitz-Birkenau to the JCC Krakow. The ride retraces the path that upon liberation was walked by many survivors, including Marcel Zielinski, who has participated in the ride since the second time it was held. We committed to come back to Krakow for the 2017 ride and recently returned again, completing it for the third consecutive time.

Ride for The Living was inspired by Robert Desmond, who rode his bicycle 1,350 miles from London to Auschwitz visiting WWII sites of liberation along his journey. After joining the JCC and becoming an active member, he realized his ride should not have ended in a place of loss, but rather at a place of hope, namely JCC Krakow. Since his first ride, Robert has been joined annually by members of the Jewish community and friends from around the world.

In addition to Marcel and his family, those friends have included: three-time Tour de France winner Greg Lemond; US Ambassador to Poland Paul Jones; US Consul General of Krakow Walter Braunohler; Holocaust survivors Zofia Radzikowska and Bernard Offen; members of the Israel Cycling Academy; Holocaust scholar Michael Berenbaum; and Chief Rabbi of Poland Michael Schudric. The ride has grown from 15 participants in the first year to over 250 in 2019 and, with a documentary in the works, it shows no sign of slowing down.

At first blush, it might seem disrespectful to the memory of the Six Million (including the 1.5 million murdered at the site where the ride begins) to be wearing spandex biking clothes and embarking on a wind-through-your-hair jaunt across the Polish countryside. To the contrary, Ride for the Living is a tangible way of paying respects and honoring the memory of all of the victims of the Holocaust. It provides a unique way to bear witness.

From a symbolic perspective, the riders leave one of the preeminent Nazi killing fields as free Jews able to celebrate life and, in bike jerseys emblazoned with Stars of David, head toward a place where a Jewish future has been imagined and is taking shape. From an immersive perspective, riders spend time learning details about Auschwitz, and attend lectures, screenings, and other activities as part of Krakow’s two-week-long Jewish Culture Festival during which the ride (and a Shabbat dinner for 750 people) takes place. And from a tactical perspective, the ride is a fundraiser that allows the JCC Krakow to serve its constituents – Holocaust survivors in Krakow, Poles who are discovering their Jewish roots, and children who are being taught at the JCC’s Frajda preschool, the first of its kind in Krakow since before the War.

In the three years that we’ve participated, we’ve cycled with people from Poland, the US, Canada, Israel, the UK, Australia, Colombia and other parts of the world, all of whom are there to celebrate the revival of Jewish life in Poland in the face of the unimaginable atrocities of the Shoah 70 years ago. The messages of overcoming unspeakable horrors to rebuild and do tikkun olam are always at the foundation of our journey.

As we cycle the miles and pass what was once and is again bucolic countryside – forever marred by the horror, violence, tragedy, and sometimes indifference that occurred – there is always a sense of determination and will to move forward. It’s hard not to look around and wonder which houses had been seized by the Nazis, displacing the families that had been the rightful owners? Which ones had been inhabited by Righteous Gentiles who risked their own lives by hiding Jews from almost certain death? Which ones had been inhabited by people who turned in their neighbors to the Nazis and the SS? Which portions of the forest had been the transient homes to Jews using their resolve every moment of every day just to stay alive? The first year we rode, rain poured down for about half the ride, recreating just one element of the conditions our ancestors endured – but, unlike them, we knew there would be a hot shower, a hearty meal, a comfortable bed and smiles and hugs at the end. And we knew there was, in fact, an end.

This year, as we said kaddish at the remnants of Crematorium No. 2, we remembered not only the souls whose lives were taken there, but we also recited the names of the victims of the very recent anti-Semitic attacks in Pittsburgh and Poway. We live at a time when the number of hate crimes being committed is increasing, when white supremacists denounce Jews as they march through an American city where slavery was the norm and when US detention centers are creating a human rights crisis aimed at refugees because of their countries of origin. What better time to honor the victims of the Shoah and make a difference for the future?

Sandy Ashendorf is a member of the Berkshire Minyan in Great Barrington. She and her husband ?? (and their dog, Harry) divide their time between the New York City’s Upper West Side and South County. For more information or to donate to the Ride for the Living, visit https://ridefortheliving.org/, or contact Sandy directly at sandy@uwsstrategies.com.