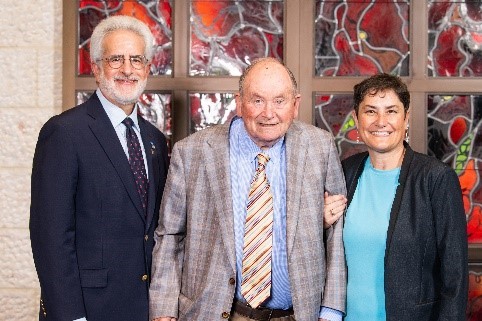 PHILADELPHIA – On May 22, Donald L. Shapiro, a philanthropist and Reconstructionist movement leader, was honored at the Reconstructionist Rabbinical College's 50th graduation ceremony. Shapiro is the founder of Vector Reality Associates, the real estate development firm, and is a longtime member of Reconstructing Judaism’s board of directors and past president of the college.

Shapiro has been a Lenox second-homeowner for 25 years, spending his summers here with this wife, Arlene. They are major donors to our Federation and members of Congregation Ahavath Sholom in Great Barrington.

Shapiro was raised in Great Neck, NY, and was educated at Phillips Academy Andover and Harvard University. He proudly served in the U.S. Navy as a communications and top-secret control officer on a heavy cruiser in the U.S. Navy’s Sixth Fleet. He spent a decade working for Levitt & Sons, the developers whose designs and structures were highly influential in post-war, suburban home construction, overseeing all land acquisitions for the company. He left to form Vector Realty Associates, which built condominiums and high-rises in the New York area.

In the early 1980s, he was invited by friend Aaron Ziegelman – a longtime movement supporter – and Rabbi Arthur Green, then RRC’s president, to join the college’s board. Today, he sits on the board of Reconstructing Judaism and serves on several of its committees. Shapiro also sits on the Board of Advisors of the Boston Symphony Orchestra. He is past president of the Harvard Club of New York City and the Harvard Club of Naples.

The Berkshire Jewish Voice caught up with Mr. Shapiro upon his return to the Berkshires in mid-June. We asked him to share some thoughts on Jewish involvement, and how even the busiest executives might still find the time to work on their chosen philanthropic pursuits.

Let's start with your interest in Reconstructing Judaism. Several years ago, I was at the General Assembly for the Jewish Federations of North America. The leadership - all very accomplished businessmen – all stressed, in different ways, how important it was for someone involved in Jewish communal life to make a point of connecting with Jewish practice of some sort – be it going to services, be it studying texts, studying Torah. And it seems that you found that in Reconstructing Judaism. So what was your connection to that that made you commit yourself over these many years?

Well, it may be a little different than you surmise. I was a 34-year-old, young married guy on Long Island with a six-year-old and a newborn baby. And my wife and I were invited to the inaugural meeting of a new congregation forming in Huntington, Long Island. We were not members of any synagogue at that point, although we had looked at a number of them and found them uninspiring, let's put it that way. But good friends of ours were among people who were starting this congregation. So we went to the inaugural meeting in August of 1969, and that's when I first heard the word ‘Reconstructionism.’ I'd never heard of Mordecai Kaplan, who had more or less created [the movement] by explaining that Judaism is an evolving civilization, meaning that we don't practice Judaism the way they did in medieval times or in biblical times or even in pre-war Europe. We practice it in accordance with the beliefs and morays of the society in which we live. So it was an American way of looking at things very, very practical, with many tenets appealed to us.

That rabbi was also a Civil Rights figure and had marched with Martin Luther King. My wife and I decided to join. Now, I'm not a religious guy, but we wanted to be members of synagogue because we had young children and we thought that was the thing to do. Four years later, I was asked to be president and then later on, years later, when I moved to New York, I became a member of a Reconstruction synagogue in New York called West End Synagogue. Maybe six or seven years after that, they asked me to be president of that. I got to know a lot of people, and I guess somebody thought that I could lead.

There's an old story about Harry Golden. So Harry asked his father why he goes to shul, and his father answered, “Moshe Rabinowitz goes to shul to talk to God. I go to shul to talk to Moshe Rabinowitz.” That's the way I feel about going to shul. The prayers, they're just words on the page. To me, they don't really ring with much resonance. But I like being part of a Jewish community, and I like talking to people that I've met and know, or new people and being part of a congregation.

But certainly you must have some sense of the importance of Jewish identification and peoplehood. Tell me a little bit about your thoughts on that.

My parents were members of a Reform synagogue in Great Neck, Long Island, where I grew up. My father died when I was 13 years old, three days after my bar mitzvah, of lung cancer. He had been sick for a long time, and the rabbi at that congregation in Great Neck was very solicitous and very warm to my family. And he liked me, and we liked him. And it made me feel closer to Judaism because of the attention that he gave our family after my father had died. So that probably had something to do with it.

When I was a kid in Andover, I didn't feel discriminated in any way, but there was no support either for being Jewish. I had to go to class on Saturdays and on Yom Kippur and Rosh Hashanah as well. But I remember myself at age 15 asking the school minister if he could arrange for a bus to a local town for Jewish kids to go to services on Rosh Hashanah and Yom Kippur. And he arranged the bus for me and I led that bus for a couple of years. while I was a student there. When I was in the Navy as a naval officer on a heavy cruiser in the 6th Fleet, on Yom Kippur, I arranged a service. I found an old prayer book and had the ship's clerk type up the service that I put together and had a service for about 12 sailors in the ship's library. So I always felt a need or a desire to be part of a Jewish community.

Also, one of my daughters, Rona Shapiro, is a Conservative rabbi. She was voted by The Forward several years ago as one of the most inspiring rabbis in the country. And I'm very proud of her. I enjoy going to synagogue in Connecticut for High Holidays and listening to her sermons.

Let me ask you about that person who is like you when you first connected to Reconstructing Judaism –  someone in your mid-30s, somebody with a young family, somebody with a busy and high-pressure business life. What would you say to that person in terms of how to think about getting involved and committing your time and effort to communal affairs?

Once you become a charitable person or a philanthropic person, you support all kinds of causes. I think that comes from watching your family when you grow up and from them comes learning how these things work in society.

Do you think there is a different emphasis nowadays than there was 50 years ago when you were first getting involved? Was there more of a, I don't know, social impetus to be a joiner, to be a leader?

I don't think so. I think it's always been there for those who want to find it.

What I hear you saying is that if you have that commitment, you'll find the time.