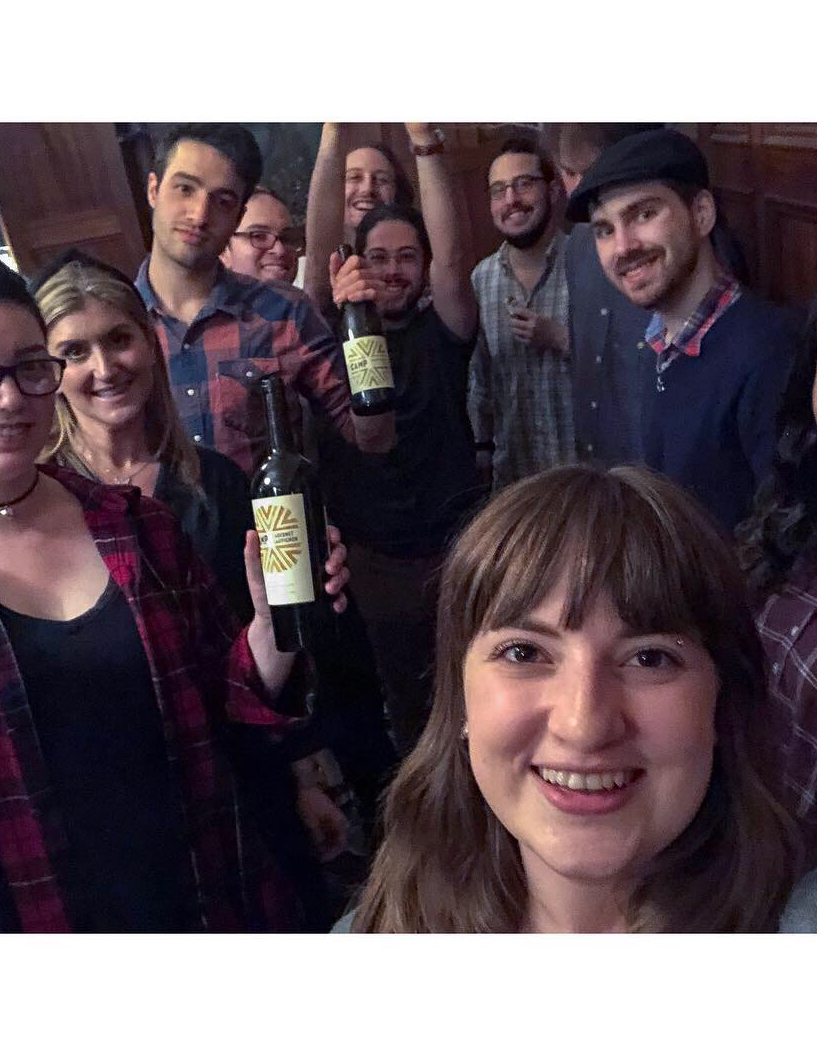 By Jodie Friedman / Special to the BJV

I moved to Great Barrington in August 2017 feeling good about starting my career as a Jewish professional with Hevreh of Southern Berkshire, and realized pretty quickly that in rural, expansive Berkshire County, my peer group of Jewish 20-somethings wasn’t centralized either geographically or within any of our established institutions.

Over my first six months here, I grew into the culture of the Berkshires and started getting to know the various demographics of the area, constantly thinking about how I was going to bring people together. As I had dabbled in community organizing in college, it was hard for me to sit still once I started recognizing opportunities for connection. Small talk makes way for big talk when I mention that I work at a synagogue, and people do the most extraordinary thing upon finding out we have this deeper connection – the same micro-expression of excitement passes over their faces and they casually say “I’m Jewish too!” They are so passive about their pride and so assured in this association.

The first few times I had this conversation, I wasn’t sure how to bring up my own hope for community without scaring people off. I knew I wanted to connect to my peers and help them feel part of a subset of a larger community, but didn’t know if the feeling was mutual.

After assessing the “vibe of the tribe,” I decided to host the inaugural Hevreh Hipsters event in December 2018, a “Chanukah L’Chaim” at a bar in Great Barrington. Hevreh was ready to allocate funds that allowed for the creation of promotional materials and the purchase of fried appetizers for attendees – both Hevreh’s staff and board of directors saw value in the expansion of Jewish engagement for a less visible population, and perceived this proposal as viable and possible.

Fueled by the positive evidence in other communities of the case for Jewish new adult engagement, I was eager to organize this inaugural event to really see whether the idea had legs in our rural area. In total, six people showed up - a huge success. I followed up with those attendees, and got together with some others who were on the cusp of interest. At the next event in March, there were fourteen.

Simply put, people in their 20s and 30s don’t want to join “the temple.” They want community that is not based in dues commitment and want to feel like there is no barrier to entry. Even joining a “free synagogue” is a different universe of engagement than a bunch of friends who happen to be Jewish out for a Friday night dinner eating sushi. People in this age cohort crave authentic experiences that relate to them. A single event every couple months where they can schmooze to get to know those with whom they share commonalities over a (paid for) cup of coffee is a low enough threshold, free of commitment to an all-or-nothing model of membership they recall from their own upbringing.

Being a Hevreh Hipster is not meant to be a pathway to temple membership, and if it was, engagement would not flourish. To nurture this population, the experience must feel curated to the specifications of what these individuals may want to do. An “a la carte” model of Jewish engagement does not have to be looked down upon – if anything, it combats neutral or negative memories of unexciting experiences from religious school and of parents answering the question, “Why do I have to go?” with “Because I said so.”

The exploratory nature of Jewish millennial engagement is evident in successful models of peer-led Jewish young adult engagement like OneTable (Shabbat dinners) and Moishe House (community-organized Jewish programming), which have curbed some of the fears created by the 2013 Pew Reseach Center study, A Portrait of Jewish Americans. At first glance of the study’s findings, one could make a pretty quick jump to: “Jews are less active because temple membership is in decline.” After a little more examination, this dire conclusion gives way to a more reassuring take: “The same amount of people are finding Jewish connection in the 18-29 range as in older generations; however, their identity flourishes in diversified environments as compared to other age ranges.”

I was officially on-boarded as a Moishe House Without Walls host just in time for the Hevreh Hipsters Fifth Night Seder this past April, which opened up a different type of Jewish involvement for new adults. For High Holy Days, you go to temple. For Sukkot, you do something outside. For Chanukah and Purim, you go to a party. And for Passover…you go to a friend’s house.

Each Hevreh Hipsters event had been held at a local establishment, and we first considered holding our Seder in someone’s home. But after thinking about the rented/shared spaces that are the norm for most Hipsters, we decided to again use a restaurant after hours. Everyone brought a dish to pass, and together we created a Jewish space that reflected our Jewish backgrounds and present intention.

Ben, a Hevreh Hipster who moved to the area a few years ago to grow into a career as a cheesemonger, joined us for our Passover Seder this spring. He was surprised to find that for the first time, he truly felt the experience of Passover was his own. Throughout his life, the ritual had very much been a family event where he followed his parents’ lead. This time, he showed up with potato kugel - his father’s recipe -and an open mind for what was to come.

Eli is a Jewish youth worker and outdoor guide who has been invested in expanding the numbers and regional participation of Hevreh Hipsters. Originally from Long Island, he likes this group for “rural Jewish community that’s just as heimish as you’d find in a big city.”

Another Hevreh Hipster, Devorah, grew up in the area and moved back after college. She now works full-time as a graphic designer.“Hevreh Hipsters gives me a connection to my Jewish peers that, as a busy working millennial, I wouldn’t have been able to find for myself,” she says. “Within Hevreh Hipsters, we’re encouraged to be Jewish together, but in our own ways.”

While these sentiments result organically with meaningful experience, there is a lot of planning that goes into setting the stage for people to feel this way upon entering the space where we’ll interact. Every time we meet a potential Hipster, I invite them to a cup of coffee/tea, take a walk, or grab a drink. It is always my intent to wear the professional hat and be clear that becoming a Hevreh Hipster can be viewed as a networking/relationship-building opportunity, breaking down the stigma that every near-peer group is a dating pool for the single folks in the crowd.

We have had great success in connecting people in a way that they do not feel pressured to be “on” and can show up to a judgment-free space just to see what it’s like, if they feel comfortable doing so. When inviting people to events, I try to introduce them to potential friends beforehand and work as a “host” throughout. After a couple of events, a culture had developed and people who return know what and who to expect. This growing familiarity is helpful as it is reminiscent of Jewish adolescence -- walking into a temple for services or school and knowing what was going to happen. There is an idiosyncrasy to religion, and we present a nuanced way for someone to feel comfortable with it.

Today, the existence of Jewish peoplehood is taking on new meaning for young and new Jewish adults. We incorporate tradition that feels inclusive and we reject archaic hard-lines like, “This is the way it has always been done.” Specific opportunities for volunteering time and money provide a sense of purpose more than text study, and having coffee with a rabbi is more personal than receiving a call from a board member before Rosh Hashanah. And while institutions are reimagining engagement, it is clear Jewish identity remains intentional and full of pride.

Moving forward with Hevreh Hipsters and navigating my own relationship to Judaism, I hope to keep the fire lit inside my peers and spark something within potential participants so they will feel Judaism through a practice - even it’s simply coming to a Passover Seder once a year - that feels additive and not burdensome.

There is no obligation to be a Hevreh Hipster. As young people are tasked with making choices everywhere, all we can do is set up options that don’t feel obligatory. We hope our Jewish peers inherently want to connect to a community with which they share thousands of years of peoplehood… and maybe a little Jewish guilt.

Born and raised in Ann Arbor, Michigan, Jodie Friedman got her Jewish communal start going to JCC day camp and eventually graduated to overnight summer camps. After completing a bachelor of arts in Linguistics at the University of Arizona, Jodie moved to the Berkshires in summer 2017 to work as program associate at Hevreh of Southern Berkshire. Jodie enjoys yoga, modifying recipes, live music, and seltzer; she always takes recommendations for museums and hiking trails. Email her at jfriedman@hevreh.org.