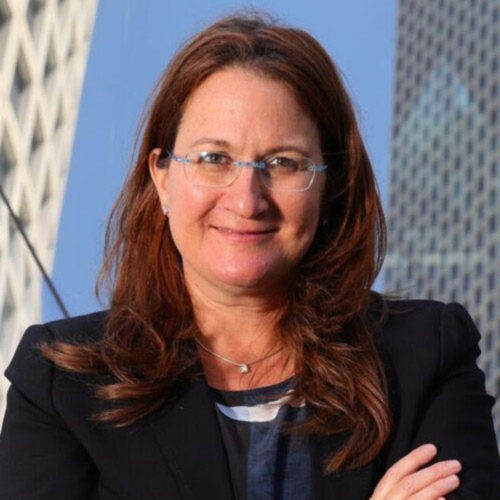 In November 2018, Danna Azrieli, chair of the Azrieli Foundation in Israel and a director of the Azrieli Foundation in Canada, addressed the General Assembly (GA) of the Jewish Federation of North America (JFNA) in Tel Aviv. She is an owner and the vice chairman of the Azrieli Group, one of Israel’s most successful real estate companies, and co-chaired the 2018 GA. She wrote the book One Step Ahead, the story of how her father survived and escaped Nazi-occupied Poland and his journey to Palestine in 1942.

Azrieli was born in Montreal in 1967 and made aliyah at age 32 “to fulfill what seemed like the most obvious of my destinies,” she says. She characterizes herself as both an “ardent Zionist” and “a product of the liberal Northeast,” and in her GA speech, spoke of how her life experiences have allowed her to understand the concerns and aspirations of both Israeli and Diaspora Jews, “the two worlds represented here at the GA.” She offered some thoughts (here edited for length and clarity) on how to breach the existing and perceived divisions that exist between these Jewish communities.

We as Israelis have our share of extremely complicated issues, but 70 years ago we were given a mandate to build the country and we did. Within our country, we have developed our own slang, our own fashion, our own version of Saturday Night Live, our own pop culture, our own celebrities.

The similarities and differences between our two worlds create disparate worldviews. We have come to this “Let's Talk” [theme of the 2018 GA] conversation about our future together from very different starting points. For example, how do we as North Americans begin to understand what we perceive as backward thinking when women are not allowed to pray at the Wall, and yet the prime minister reneged on the Sharansky compromise due to the pressure exerted by religious extremists?

As a North American, you are probably asking, “How could he have done that?” Some of you might go even further and say, “Why should I support a country that does not support the way I practice my religion?” But as an Israeli, I don't think that this course is actually about the basic rights of women to pray as equal to men or about the way we practice our religious freedoms. I think it is actually about a group of extreme people with political clout who truly believe that they must preserve our history with zeal. They think that if they do not protect our rituals of the past that we are in danger of losing our tradition. Any change, any modern additions, they say, will lead to our demise.

The religious extremists point to intermarriage in the Diaspora and to the lack of Jewish knowledge in young people today; but in the Diaspora in North America, we fight back with Reform and Conservative Judaism. We try to encourage attendance in Jewish schools and Jewish camps. We have built Birthright and MASA, but in secular Israel, these pluralistic trends have been very slow to take. The most common response by a secular Israeli is that they're better off with no religion. even though they often do many acts without acknowledging them as religious – for example, almost every secular Israeli will fast on Yom Kippur.

The secular Israelis still consider themselves Jewish. They still speak Hebrew, the language of our Bible, and most truly love our country. But it is not uncommon for a modern secular Israeli to say just being Israeli is enough. Whole generations of Israelis have basically released their hold on our shared library of religious texts and heritage.

My Australian husband Danny and I are raising our children in Israel, but a few years ago my sister asked us to sing [the prayer] “Adon Olam” at her son's bar mitzvah. So I look at my two children who were in grades one and two at the time and were attending a secular Israeli public school. and I realized they don't know “Adon Olam.” My children learned the “Adon Olam” from a YouTube channel while we were walking on the streets of Toronto two days before the bar mitzvah. On that day, my husband and I made the decision to move from our very secular Israeli environment to a community with a pluralistic TALI school [nominally affiliated with the Conservative stream’s Schechter Institute of Jewish Studies, TALI schools are largely modeled on American Conservative Jewish day schools’ pluralistic yet religiously traditional makeup]. [It is] similar to how I grew up (but unfortunately not very prevalent in Israel today) where our children would be exposed to Judaism and like-minded families.

Now, in addition, we send our kids back to North America every summer to attend summer camp at Camp Ramah, where there the kids learn “birkat ha’mazon” (the after-meal blessings) and they're exposed to the Yiddishkeit that it takes a village to convey – a village filled with customs and rituals that my Zionist heroes, the ones who built this country, gave up upon in favor of a culture that focused on the importance of building the land, of being strong. Our new culture was no longer tied to being victims of the past. It was no longer tied to the rituals that preserved our identity when we were visitors in another people's land when we were minorities. So many Israelis grew up feeling that just being Israeli is enough, but as an Israeli, I think just being here is not enough. There needs to be more; and so what is my message today?

As today's world is becoming more extreme, as people are becoming more closed and protectionist, we the Jewish people of the world do not have the privilege or the luxury of becoming protectionist from each other. Since I come from the real-estate world, I'm going to use an image of an arch. An arch is two sides pressing together.

Israel today is less than 50 percent Ashkenazi. So many of us come from Yemen and Morocco, Iraq and Iran, and Ethiopia recently.

Israeli society is incredibly diverse, similar to North America. Israel is an immigrant society with incredibly ethnically diverse Jewish cultures. This Jewishly diverse Israel is exactly what our Zionist dream intended when we built this country. Our immigrant mentality tried to push us to belong, just like those of you whose grandparents immigrated to America. As immigrants to any country, we learned the language, we changed the way we dressed. But this next generation, the generation that we're here at the GA to talk about, they’re native Israelis and native North Americans. They're no longer immigrants.

This next generation has the benefits and the burdens of a people who actually feel like they belong. The benefit is that we're thriving in our respective communities, but the burden is that we've forgotten what it's like to be "other." And so we forget that we need each other. But we are two sides of an arch – two sides that are stronger when placed together. We have layers and layers of success and failure, inclusion and exclusion, protectionism and universalism. Moments of great fairness and moments of terrible closed-mindedness.

Don't give up on our country. Don't walk away because your liberal sensibilities are insulted. Don't assume that nothing can change. Things do change – just painfully slowly, incrementally, and with all of our help.

Help by continuing the dialogue, but not by oversimplifying it. Help by infusing your children with a love of our heritage that celebrates the good. I am NOT suggesting that we ignore the things we disagree with. I am simply suggesting that we remember it's a marathon, not a sprint and the strength of Israel today is an equal force leaning into the counter-strength of Jews throughout the world.