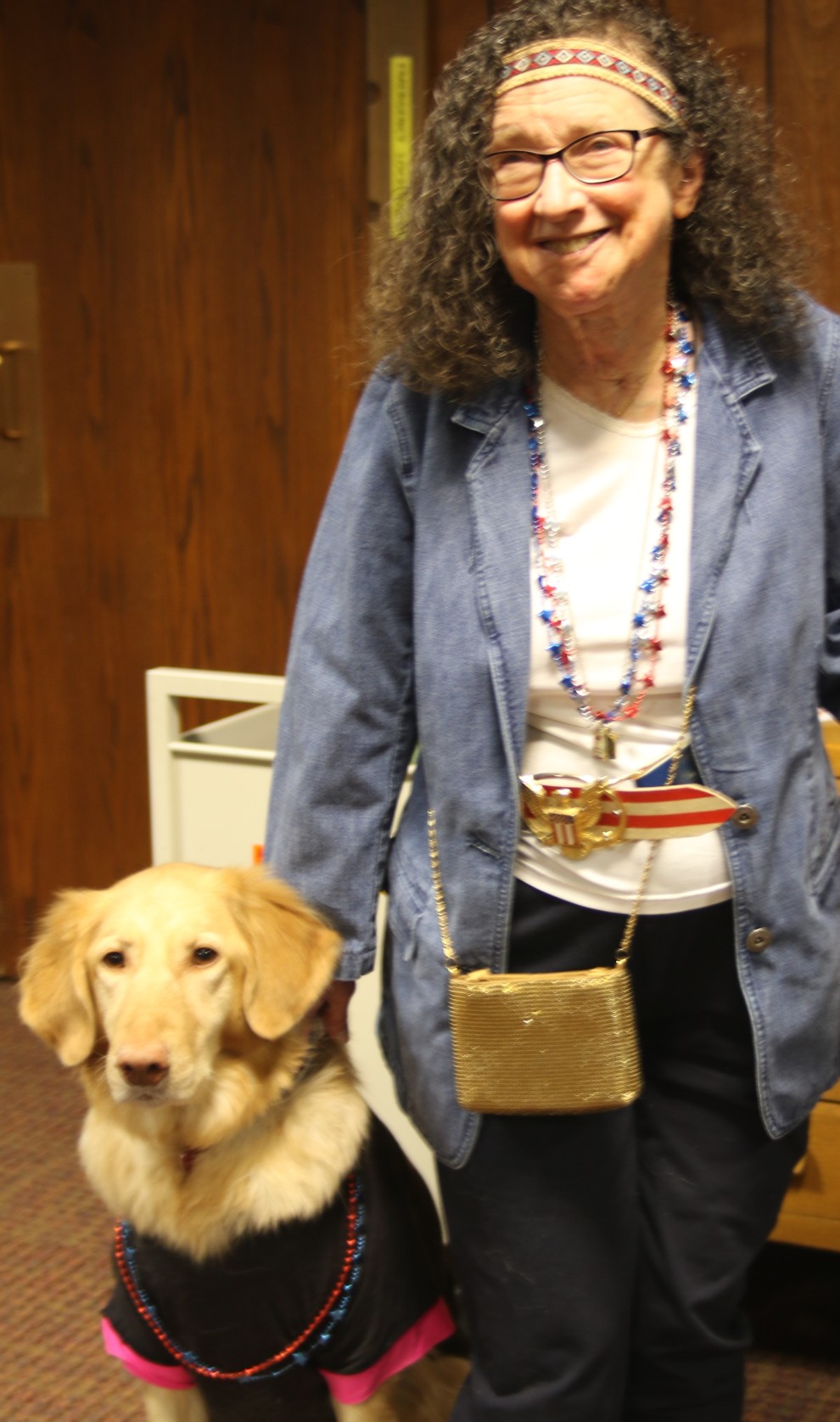 Simply put, the Jewish Federation of the Berkshires could not make your campaign dollars work without the enthusiastic support of our steadfast volunteers. Each year, hundreds of volunteers of all ages give thousands of hours of their time to support this Federation’s important work –  making fundraising calls on Super Sunday; decorating, packing, and delivering holiday bags on Purim and Rosh Hashanah; delivering kosher meals to the homebound; serving on our boards and committees; and so much more. Merle Ferber is one of our Federation’s super volunteers, who – abetted by her beloved service dog, Ziva – is always willing to help.

A sign near the front door of Merle Ferber’s Pittsfield home bears a famous epigraph of Albert Camus: “In the midst of winter, I found there was, within me, an invincible summer.”

About volunteering, Merle Ferber says “I always just did it myself. For example, I was the kid on Halloween who went trick or treating for UNICEF.” Born in Bronx, NY, she attended the prestigious Bronx High School of Science and earned a college degree in special education. She moved to the Berkshires in the mid-1970s, lured by a job in the Pittsfield school system. “At the time, Massachusetts was the worst state for mainstreaming special needs students,” she remembers. “Children with mental and physical handicaps had to go to ‘special schools for special kids.’”

After Merle relocated, however, the job fell through, but she had no intention of going back to New York City. “I loved it here instantly,” she says, and set out to find ways to make her new circumstances work. She started out by drafting resumes for job seekers – “if you fed me, I’d do your resume,” she says, adding that was when she started volunteering “in any cause she found interesting.”

She became involved with the Berkshire County-based BCArc, a non-profit organization for children and adults with developmental disabilities, brain injuries, and autism, and later with Community Outreach Occupational Learning, which provided career training for returning Vietnam veterans, ex-offenders, and women receiving public assistance. “I worked day and night to get them through the program and find them jobs,” she remembers.

Eventually, Merle leveraged her skills entrepreneurially and set up shop in Pittsfield as a career counselor, as well as working part-time as the USY counselor at Knesset Israel. She found time to volunteer for the Junior League of Berkshire County, the NAACP, the Red Cross (“If I said hello to you, you were either going to give me your blood or your money”), and what eventually became the Elizabeth Freeman Center, a vital resource for female survivors of domestic abuse and sexual assault.

In 1983, disaster struck. Merle was involved in a car accident that left her disabled. She spent a year in the hospital recovering from her injuries, and then another several months at a facility in Boston for pain management and alternative therapies. When she was released, she worked briefly for IBM in Boston before moving back to the Bronx to be closer to her family.

Merle’s return home was destined to be short-lived. “You didn’t like the Bronx before your accident,” her mother responded when Merle voiced her unhappiness. “What made you think you’d like it now?”

So she went back to the Berkshires. When Merle returned, however, she found that her “energy had changed.” Through the lens of her disability, she began to observe all the obstacles ordinary life posed to people with mobility issues – a dearth of doors cut to accommodate wheelchairs, the lack of ramps in public spaces, the absence of curb cuts at intersections, and so forth. What really piqued her ire was the lack of accessibility in public buildings, particularly the downtown courthouses, which inhibited participation in civic life for the disabled.

Merle became (and remains) a staple at local government meetings and civic events, forcefully advocating on behalf of the rights of disabled people. “I saw people like myself who couldn’t speak out,” she says, “who couldn’t speak out before their accidents. It was not in their natures.” One has only to look around Pittsfield to see the changes Merle’s activism has helped to bring about. “It took 20 years,” she says. “I never thought I’d live to see it.”

As well-known as Merle is for her advocacy, she is equally famous for her service dogs. She remembers first encountering a service dog in the mid-1990s at a conference in Boston, where a wheelchair-bound fellow activist she knew was in attendance with his beautiful dog. At the time, she remembers, only the blind had service dogs, and in any case “I never had a dog. I didn’t like them – they were dirty and hairy. In the Bronx, dogs weren’t allowed in the apartment buildings in my neighborhood, so I never knew anyone with a dog.”

However, recognizing the utility of a service animal, Merle met with a local veterinarian, the late Dennis Ovitsky, who was involved with NEADS, a Massachusetts-based non-profit that is an innovator in training dogs to assist the handicapped. Merle’s first dog was a smooth collie named Radar, “who was hairy and smelly and awesome. Having him was very good for me. I needed something to take care of. Life was too easy.”

Radar lived to the ripe old age of twelve, and was followed by Miller, another smooth collie who as a puppy was one of the first dogs trained by inmates participating in the Prison PUP Program created by NEADS. The program now operates in twelve correctional facilities in New England. Currently, Ziva, a 4-year-old collie/golden retriever mix, occupies the sidekick role.

Merle says she reconnected with her Jewishness after her accident, and is one of the Sunday morning minyan stalwarts at Knesset Israel. She and Ziva never miss Federation’s Super Sunday phone-a-thon  - they’ll be there on May 17. And she works hard on the telephone twice each year in advance of the Joe’s Project delivery of holiday bags to nursing homes and homebound members of our Jewish community. Merle calls all the local care facilities to identify their Jewish residents, ensuring that each person receives a bag and recognition as valued members of our community. She also visits members of the community who are recuperating from illness.

“Federation really represents all I believe in,” says Merle. “Be proud to be Jewish, and let your Jewishness touch your heart in your own way.” And she encourages everyone to discover the satisfaction of giving time for others, even if it sometimes feels “hard to volunteer if you feel you don’t get that pat on the back.”