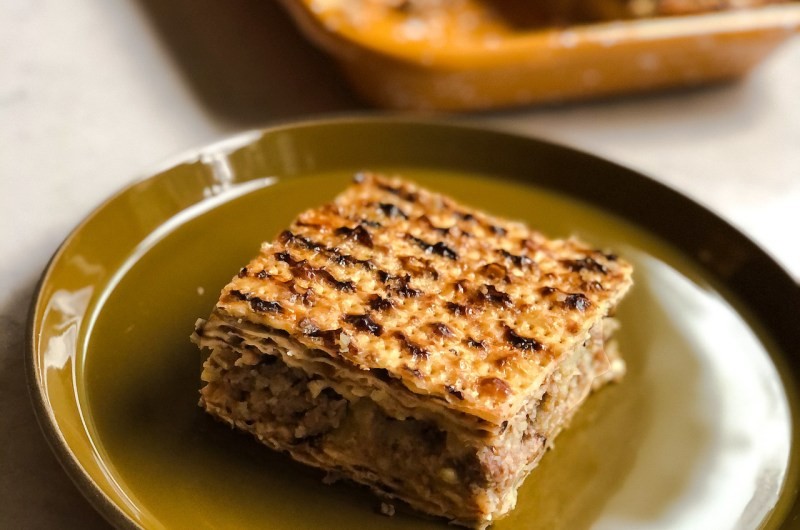 On eating lamb at the Seder, Sephardi and Ashkenazi customs diverge

From the Seder plate with its many symbolic foods, to the ins and outs of cleaning, koshering, and cooking, Passover can be a daunting task for those who observe it to the nth degree. On the upside: it's a great opportunity to find things that have gone missing during the year. That earring! That receipt!

Oh, and the cooking. The regular rules of kashrut aren't challenging enough. No, we sell the foods in our pantries and shop for provisions that comply with the extra-stringent rules of the holiday. But even that's not enough. For centuries, Ashkenazi tradition prohibited the consumption of rice, beans, corn, seeds, and legumes on Passover. But the Torah never mentions those items as forbidden. And by the way, corn wasn't even introduced to Europe from its origins in Mexico until the late 15th century. Some scholars believe that the biblical word "corn" referred to another plant food, but that didn't stop the rabbis from prohibiting the stuff that grows on cobs.

But thanks to a responsa written by Rabbi David Golinkin in 1989, those foods are now permissible, although many Ashkenazim still won't eat them. Golinkin basically argued that the prohibition was ridiculous and said that we should do as the Sephardim do. As I'm sure I've written before in this space, kol hakavod for bringing reason to the discussion.

But there is one other food that has yet to bridge the Sephardi/Ashkenazi divide: lamb. Growing up, we never had lamb for our Seder meal. When I asked my mother why, she simply said it was not in our tradition to do so. It was only as an adult that I learned why neither she nor my bubbie ever served lamb at either of the two Seders.

Herein is the section of the Torah that educates us on the connection between Passover and the lamb:

21 "Then Moses summoned all the elders of Israel and said to them, 'Go at once and select the animals for your families and slaughter the Passover lamb. 22 Take a bunch of hyssop, dip it into the blood in the basin and put some of the blood on the top and on both sides of the doorframe. None of you shall go out of the door of your house until morning. 23 When the LORD goes through the land to strike down the Egyptians, he will see the blood on the top and sides of the doorframe and will pass over that doorway, and he will not permit the destroyer to enter your houses and strike you down.

24 Obey these instructions as a lasting ordinance for you and your descendants. 25 When you enter the land that the LORD will give you as he promised, observe this ceremony. 26 And when your children ask you, 'What does this ceremony mean to you?’'27 then tell them, 'It is the Passover sacrifice to the LORD, who passed over the houses of the Israelites in Egypt and spared our homes when he struck down the Egyptians.' Then the people bowed down and worshiped.

The Israelites did just what the LORD commanded Moses and Aaron.

Ashkenazim do not eat lamb at the Seder meal. Why? Because they believe that doing so is equivalent to eating the paschal sacrifice that was intended to be made only at the Temple in Jerusalem. With the Temple no longer standing, the rabbis reasoned, there was no longer a place to offer that sacrifice, so we should not partake of it.

Ashkenazi Jews do, however, place a zeroa, or shank bone, on the Passover table as a symbol both of God’s outstretched arm that lifted us out of slavery, and of that Temple sacrifice that the rabbis reasoned prohibits eating lamb. Today, of course, many Jews use a chicken leg instead of a shank bone, and vegetarians use a beet instead of any animal part.

Since both sides of my family came from Eastern Europe, we followed Ashkenazi tradition. Hence, no lamb at our Seder meals.

But I'm confused. The Exodus from Egypt, whose narrative forms the basis of the Passover Seder, took place before we received the Torah at Sinai. Therefore, we had no laws governing sacrifices, much less a Temple at which to offer them.

Enter another tradition that came with the Sephardim, the Jews who escaped the Iberian Peninsula during the Inquisition. According to the Sephardi interpretation, lamb is integral to the Seder. As Rabbi Batshir Torchio explains, Sephardim "are re-enacting that last evening before the Jews left Egypt and are literally ingesting the narrative of the Exodus from Egypt toward becoming a nation." (Lest one think this is too radical a departure from tradition, only the kosher parts of the animal are permitted.)

So, wouldn't ewe know it? We Jews have something else to argue about. To lamb or not to lamb? I sheepishly present the following recipe.

Mina is a Sephardi savory pie that has also found popularity among the Egyptian Jewish community. While it can be made either dairy or meat, the one offered here is composed of layers of ground lamb, vegetables, and matzah. Sort of a pesachdik lasagna.

The word mina is Ladino for mine or quarry. You will certainly enjoy digging into this golden dish as it is a bonanza of flavors.

If you're not a fan of lamb, this dish is delicious made with ground beef.

One 28-oz. can crushed tomatoes

In a large skillet, heat olive oil until it is hot but not smoking.

Add the leeks and garlic. Cook until soft.

Add ground lamb, salt, black pepper, spices, and sugar. Cook until the meat is brown, stirring occasionally and breaking it up into uniform little bits.

Pour in the crushed tomatoes and mix well. Bring the mixture to a boil over high heat and cook for 3 minutes, then lower the heat to medium and cook an additional 5 minutes.

Remove from heat and set aside until room temperature. Mix in the four beaten eggs and the chopped eggs.

Cover the bottom of the casserole dish with two pieces of matzah.

Spread a third of the filling over the matzah.

Top with more matzah, then repeat until there are three layers.

Lay the two matzahs across top.

Brush the one remaining egg over the top of the matzah.

Bake until the top is golden, about 45 minutes.

Cool for 15 minutes before serving.

* Many recipes have you soak all the matzah, but I have found that they absorb plenty of liquid during cooking.