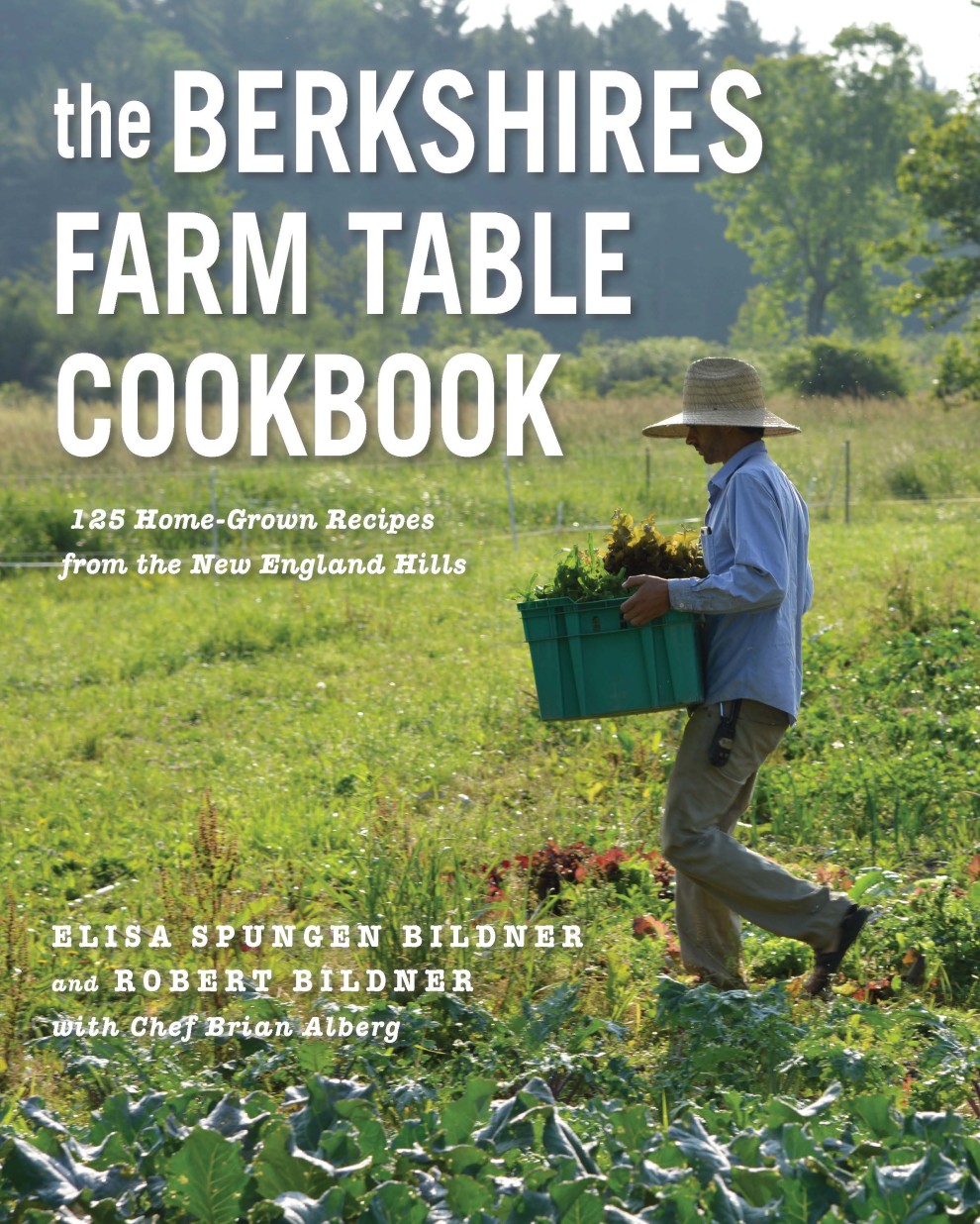 The Berkshires Farm Table Cookbook is a billet-doux to the Berkshires that has arrived at a traumatic and unprecedented moment in the life of our community. Over the course of the week that it first crossed my desk and I interviewed authors Elisa Spungen Bildner and Robert Bildner, Tanglewood finally canceled its 2020 season and Kripalu announced it was shuttering until 2021, laying off 450 workers.

That bad news – which capped off weeks of similarly dispiriting announcements from literally all the major cultural institutions that are the Berkshires’ lifeblood – landed like a devastating one-two combination of body blows and has left this region reeling. As I write, it’s the first of June, and how things are going to turn out for us this summer (and beyond) are beyond anyone’s ken.

Amidst this cavalcade of communal (and, I’ll admit it, personal) anxiety, I was surprised about how much solace the Bildners’ cookbook provided. For sure, it’s a handsome book that evokes the verdant, perfect Berkshire summers we anticipate all year and then revel in during their always-too-brief duration – Rob Bildner is a capable photographer and contributed the lion’s share of images of the places and people profiled. (The prepared dishes were captured by specialists in that kind of photography, and look delicious.)

But The Berkshires Farm Table Cookbook is much more than pretty pictures. It’s the culmination, say the Bildners, of more than five years of focused exploration of local farms, restaurants, and artisanal food production, a portrait of how constituent parts of the Berkshires’ alternative food culture work together toward achieving the farm-to-table ideal. The book’s recipes, developed with former Red Lion Inn chef Brian Alberg, were intended to be accessible to any competent home cook, says Elisa, and will work even when supermarket staple ingredients available year-round are substituted.

By highlighting the fresh ingredients produced by local farms in these recipes, the book also invites the intrepid Berkshires home cook to connect directly with local farmers and artisans through fresh markets, farm stands, and CSAs – those inspired to venture out for the freshest seasonal ingredients will not only eat better and healthier, but also get to know their neighbors and explore these hills more comprehensively, a joy in and of itself.

The Berkshires Farm Table Cookbook is about the character of a place – what it is about the Berkshires attracts a certain kind of food-focused person, what they believe they can achieve here (personally, practically, creatively, socially, and sometimes even spiritually), and how they work to fulfill those ambitions.  ­In spirit, it resembles Jerusalem, Yotam Ottolenghi and Sami Tamimi’s landmark celebration of Israel’s multicultural capital and its denizens through the lens of the city’s rich food culture.

One characteristic of the Berkshires I have noticed after nearly a decade of living here is that while the region is chockablock with amazingly accomplished people who are doing fascinating things, they are likely to be operating within their own spheres. Part of that is geography, part of that is demographics, but mostly it’s personal preference – people are happy to do their own thing. What communities people do elect to join align with their interests and needs, and if you are not a participant in those particular communities, it’s easy to miss a lot of what is going on.

The Bildners are plugged into the Berkshires’ food culture and are gracious and inclusive guides to its richness and quirks. Lawyers by training, they both worked in Rob Bildner’s family business supplying specialty foods to supermarkets in the Northeast. Elisa also worked as a journalist, studied nutrition, and trained as a chef at culinary school. They are strong supporters of the Jewish Federation of the Berkshires (Elisa is joining the board of directors this month and both are serving on our Major Donors Host Committee) and other philanthropic causes, notably the Foundation for Jewish Camping, which the couple founded in 1998.

They’ve been in the Berkshires for 35 years, their interest in local farming kindled when their son started farming on their Becket property and then frequenting farmer’s markets to sell his produce. Elisa says that her interest in sustainable farming aligns with her Jewish journey. “I recognize that the values of these non-Jewish farmers were also Jewish values,” she says. “Reverence for the land. Treat animals with compassion. Don’t waste.” Rob says he admires the communitarian impulse displayed by many local farmers. “They care about quality and health and keeping money within the community.”

In The Berkshires Farm Table Cookbook, readers meet different types of people working the land, among them legacy farmers operating family farms, although often in ways their forebears would not have envisioned. Also working here are what Rob Bildner calls “consciousness farmers,” folks who reject the practices of large-scale agribusiness and cultivate their crops sustainably and employ humane practices in raising livestock. Some of the farmers the Bildners profile are people of means (or partners of a person of means) searching for a more meaningful way to work and live. Together, the profiles form a panorama of farming life in the Berkshires, its satisfactions and its sometimes cruel vicissitudes.

Here’s an example of a bit information from the Bildners' profile of Peter Platt and Meredith Kennard, owners of The Old Inn on the Green in New Marlborough, that imparted the complexities facing many of the principled, sometimes neophyte farmers in the Berkshires:

Platt is aware of the pressures facing farmers he deals with as he works to bring farm-to-table dining to his entities. In the past, “when you used to have generations of farmers,” he says, “there was a lot of knowledge passed on from father to son—or mother to daughter.” For new farmers, there’s so much to learn in such a short period and every year the growing season is different. And, farming is not just about growing and raising food, says Kennard. It’s about making a living.

The people profiled in the book all work – none of them, not the earnest consciousness farmers, not the savvy businesspeople, not the slick restaurateurs, have chosen an easy way to make a living. The Bildners have provided an invaluable window into their lives and livelihoods. “People don’t understand what’s going on here behind the Tanglewood veneer,” says Elisa. Bottom line – it’s nice to care a lot about how the turnip you’re eating was grown, but it’s much more meaningful to know about your Berkshire neighbors who grew it.

And as someone with 40 years of home cooking experience, I can tell you that the recipes are dishes that you will actually want to cook and that preparing them is within the standard skill set. (The Carrot Soup with Sage and Mint, inspired by Woven Roots Farm in Tyringham is gooooood.) I envision The Berkshires Farm Table Cookbook occupying a prized place on kitchen shelves in the Berkshires, revisited year after year by full-time and seasonal residents mapping out meals during the precious summer months of abundance.

A crucial bit of information about the Berkshires was shared by a longtime resident soon after I first relocated here nearly a decade ago. “Every year that you are in the Berkshires,” he said, “summer is going seem shorter and shorter.” It took me a few seasons to get what he meant, but what he imparted remains the truest thing I know about my adopted home. By the time that celery-green early spring changes to floral, sneezy technicolor spring, you best have figured out your game plan, marked your calendar, and saved up some money, because the summer train is rolling – true if you’re a gardener, a sporting type, nature-loving, a business owner, a culture vulture, a fundraiser for an extremely worthy local Jewish organization, whatever. Don’t put off savoring what you might be in front of you now, because it won’t be there for long.

In normal times, with so much to do and so many people to see, it’s easy to feel harried by the pressure to hurry up and relax. But in this strange season, maybe rambling through unexplored byways while trying to figure out a memorable meal to prepare when we get home is the best of what the Berkshires has is in store for us. With The Berkshires Farm Table Cookbook, the Bildners have provided an excellent roadmap of different ways we might get lost.

The Berkshires Farm Table Cookbook can be purchased through Amazon or the website  berkshiresandbeyond.com. Their Facebook page, Berkshires and Beyond, features updates, recipes, videos, and food and farming news.