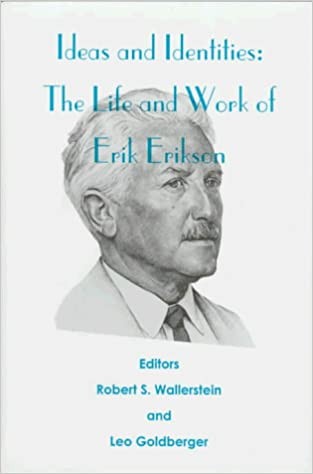 By Dr. Leo Goldberger / Special to the BJV

I doubt whether Erik Erikson needs much introduction, yet for the record, he was born in Frankfurt am Main, Germany, in 1902 (and died at age 91 in Harwich, MA), and is known worldwide as a child-developmental psychologist and psychoanalyst.

A prodigious author, he was featured on the cover of Time Magazine and won the Pulitzer Prize in 1969 for his Gandhi psychohistory volume, to cite just a few of the dozens of his other major honors and achievements. It might be surprising to find out that he avoided formal schooling other than his required German gymnasium (high school) and some brief attendance at an art school in Munich – becoming an artist was his only aim back then in the 1920s, before his interest and training in psychoanalysis took root.

With the Nazis on the horizon in the early 1930s, he and his Canadian-born wife, Joan, and their two children attempted to emigrate, initially to his mother’s birthplace in Copenhagen, Denmark. Unable to gain permanent residence there, they went on to the USA. Fortunately, they already had many connections with prominent psychoanalysts and others who would facilitate their transition to America. Most astonishing is how quickly he gained a full professorship, in his case as a child therapist instructor at Harvard‘s Medical School and subsequently at Yale and the University of California, Berkeley, without even having a bachelor’s degree!

Following his brave refusal to take the so-called loyalty oath required at Berkeley and elsewhere during the McCarthy period, in 1951 Erikson joined the budding clinical staff at the Austen Riggs Center in Stockbridge. He was among a group of prominent psychoanalysts recruited by the director, Dr. Robert Knight, from the staff at the famous Menninger Foundation’s clinic in Topeka, Kansas, where Knight served as medical director.

As I happen to have been a longtime friend of several colleagues on the Riggs staff (and for some years also worked as a research consultant with an office at Riggs), I had the good fortune of meeting “Erik,” as we were wont to call him. His other preferred title was simply that of “Mister,” which he felt had a fine history.

Erik was indeed rather modest, but nevertheless a most unique and impressive person. His original thinking, especially in the orbit of his developmental stage theory and identity-crisis theory. Both made a major impact not just within psychoanalysis, but in academic psychology as such. He was an unforgettable presence – an innovative, galvanizing clinician and original thinker who nevertheless remained loyal to and respectful of his original Freudian training. Anna Freud, Sigmund’s daughter and the founder of child psychology, “discovered” Erik. He was then in his twenties and scraping by on a meager income by offering his talent as an artist, bicycling across Europe and offering to draw children in their schools.

Before becoming an analyst herself, Anna Freud taught at Montessori schools. She noted Erik’s perceptiveness with children, and introduced him to her father for potential psychoanalytic training.  To pay his way, he was often employed as Freud’s chauffer. I’ll also note that Freud never urged him, nor his daughter, to study medicine first — in fact, Freud thought it might be a hindrance!

It should not come as a surprise that Erikson’s obsession lay obviously with the concept of one’s psychological sense of identity! And it was equally obvious among those of us who knew of his background that it was grounded in his own struggle with his identity as a function of his family background.  His mother, Karla, was born and raised in an upper-crust Danish, assimilated Jewish family by the name of Simonsen. Karla had the bad luck to marry a fellow Danish Jew, a fellow named Salomonsen – believe it or not, this Salomonsen abandoned Karla on their honeymoon in Rome, confessing to being wanted by the police for some bank fraud in Copenhagen. Leaving his bride stranded in Rome, he was never to surface again!

Some many months later – while still without a word from Salomonsen – Karla apparently was impregnated by a non-Jewish Dane with whom she had a brief affair and whose identity was effectively shielded by Karla throughout her life.  Karla’s parents — in shame — sent their pregnant daughter to hide out with relatives in Frankfurt.

It so happened that her obstetrician in Frankfurt — one Dr. Homburger, a staunch Jewish member of the local synagogue — fell in love with his patient. Dr. Homburger proposed marriage on the condition that Karla never tell her newborn son (Erik) that he was not his father. She promised! Unfortunately, within some years, when young Erik went to the Jewish Parochial School, Erik’s blond hair and blue eyes caused the other Jewish kids to steadfastly bully him, disparaging him as being a “goy.”  He apparently had a painful time and pestered his mother about it – was Homburger not his father? The question began to obsess him, though still his mother steadfastly refused to reveal the truth. It took many years of sleuthing by biographers before the truth was revealed: his biological father was a non-Jewish Dane. Erik did not learn this until his old age.

When I had personal encounters with him, the subject did not come up — although we spoke of his bar mitzvah and of his many visits to Copenhagen as a youngster to be with his mother’s family in the summer. I also sensed that he was a bit envious of my knowledge of Danish (I grew up in Denmark), a language that he never mastered.  It seems he had been especially keen on writing his final psychohistory book on the Danish philosopher Soren Kierkegaard, but regretfully gave up the project, as he felt one needed to read him in Danish to fully understand him.

“So, what are you working on now instead?” I asked.

“I am working on a psychohistory of Jesus Christ of Nazareth,” was his reply—to my astonishment.

“But don’t you need to know Hebrew, Babylonia, Aramaic, and Latin?”  was my obvious reply.

“No,” he said, “the relevant literature is mostly in German!”

The volume on Jesus was never to be completed. All we have on that subject is his brilliant article entitled “The Galilean Sayings and the ‘Sense of I’  (1981), which is reprinted in my and Robert Wallerstein’s edited 1991 volume, Ideas and Identities: The Life and Work of Erik Erikson.

One final note: Another encounter that sticks in my memory of potential interest to the Berkshires is to note Erik Erikson’s close relationship over the years with our famous Norman Rockwell.  While at times in Stockbridge, he was Erik’s patient, but was obviously more than that — a close friend, if not also a fellow artist at heart.

I will never forget an afternoon tea with the Rockwells in the presence of several Austen Riggs staff and post-doctoral fellows. They surrounded Erikson in eager conversation – Erik was obviously “the star!” — while totally ignoring Rockwell who was sitting, seemingly forlorn, across the living room.

Coming to the rescue, I chose to introduce myself to Rockwell, mentioning my friendship with his son, Jarvis. “Oh, so you know Jarvis,” he said. “He is really the true artist—I am just an illustrator!”

Rockwell then asked if I’d like to come to his studio nearby to show me how he worked, which of course I did.  I also began to understand the quote by Erik about Rockwell I had come upon some years ago, namely:  “Norman Rockwell  painted his life but did not live it.”  Needless to say, this briefly stated insight tells you about Erikson’s remarkable clinical sensitivity.

In my view, I felt there was a common bond between Erikson, who also had been an artist of sorts, but with words instead of paint. Both men were quite modest, if not also a bit insecure without the support of their wives. (Erikson’s wife also had a major impact on him, but failed to receive the credit due her. A wonderful partner, Joan Erikson was supposed to have been the co-author of his historic best-seller, Childhood and Society, but alas the book’s publishers felt it would lessen the sales.)

Some final words about Erik’s impact at Austen Riggs come from the Harvard Gazette in April 2020): “Erikson  turned the grand experiment of treating very disturbed patients in an open therapeutic community into a Golden Age of conceptual and clinical  inventiveness.” Many of us living in or near Stockbridge might to this day see pairs of serious-looking persons walking together down the main road towards or back from the golf course area while talking. These people are likely to be a patient and a therapist during their therapy hour…as most likely endorsed by Erik.

Dr. Leo Goldberger, who resides at Kimball Farms in Lenox, is a psychologist, author, and editor known for his work in sensory deprivation, personality, stress, and coping, as well as for his writings on the rescue of the Danish Jews during the Holocaust. A professor emeritus of psychology at New York University, Goldberger is a former director of its Research Center for Mental Health. In 1993, he was awarded The Order of Dannebrog (Knight's Cross) by Queen Margrethe II of Denmark.

About the image: Norman Rockwell granted co-editors Wallerstein and Goldberger permission to use his portrait of Erik Erikson on the cover of their book. Image courtesy of Leo Goldberger.