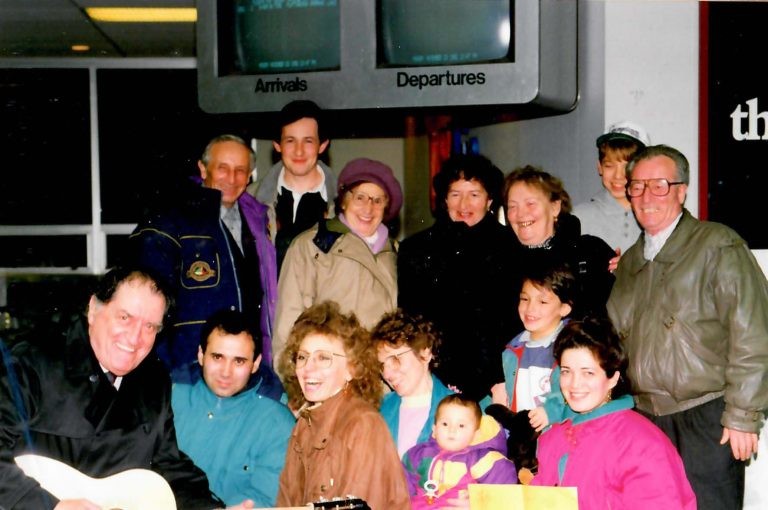 Given that violinist Yevgeny Kutik’s musical career has, for years, taken him relentlessly around the globe to perform as a soloist in prestigious concert and recital halls, I found it kind of amusing that his cell phone number still has the “413” area code.

When I reached him at his apartment in Boston, Kutik assured me that he wasn’t sentimentally attached to the number, only that he’d had it for so long, keeping it makes things easier for him. Yet as he talked about his latest musical project, “Meditations on Family,” it was clear that his family’s experience as immigrants to the Berkshires continues to profoundly inform his life both personally and artistically.

Kutik was four years old in 1989 when members of his family relocated from Belarus (then still part of the USSR) to Pittsfield, beneficiaries of this Jewish community’s passionate mobilization on behalf of Soviet Jewry. In the end, the Berkshires resettled more Jews from the Soviet Union than any community its size in the United States, and our dedicated community members followed through to ensure that those families were able to adjust to and thrive in their new home.

Kutik says his “Meditations on Family” project germinated when his family gathered together in 2017 for Thanksgiving. His grandmother, Baba Luba, recounted the uncertainty the family felt when some members left for the West while she and others remained in Belarus, unsure that they would ever be reunited. Fortunately, Kutik’s grandparents were able to immigrate to the United States three years later, and as Kutik writes on the project Web page: “As Baba Luba told her story, she brought out a photo that was taken at the [Albany] airport during the first several minutes of their arrival. The camera captured the priceless expressions of my family members, especially that of my grandfather Isaac and Baba Luba, exhausted from their journey and filled with the overwhelming emotion of seeing their family again.”

Says Kutik: “The expressions got me thinking about how a photograph like that might ‘sound’ if set to music.”

As a musician, Kutik explored his family’s history and cultural roots in his 2014 release “Music from the Suitcase,” on which he performed the mostly Russian compositions from the cherished sheet music that his mother, music teacher Alla Zernitskaya, brought with her when the family left Belarus. In an interview with the New York Times, Kutik said the sheet music “is the physical embodiment of our family and our journey. It reminds me of what we went through and how far we have come.”

Kutik wondered how he might be able to bring his idea about using photographs as musical inspiration to life, how he might continue to explore themes of family and memory in different ways than he had in “Music from the Suitcase.” Rather than looking to the music of the past for inspiration, Kutik came up with the idea of commissioning new work by contemporary composers.

A photo might evoke “a rush of memory…a rush of emotions,” says Kutik. “All composers have lives and family and culture that have led them down paths of exploration.” So Kutik searched for collaborators among composers he knows and admires, asking them “to choose their own family photo, a photo that conjures up memories of joy, sadness, unity, and longing, and to translate that photo into a short work for violin,” he writes.

In all, eight composers contributed new chamber music pieces to “Meditations on Family,” each approximately 3 minutes long, some written for solo violin, some for violin and other instruments. In March, the new work will be issued on CD and through streaming services like Amazon and Spotify, but Kutik has taken the unusual step of debuting one composition a week on his Web page

Kutik says he wanted “an easy, user-friendly way” for listeners to encounter the new work, and by staggering the release of the eight short pieces, “someone can listen for a few minutes, meditate on the piece, and then come back later for more.”

The releases started on January 18 with Chris Cerrone’s jarring “Flight to Limbo” – a jagged violin solo that responds to a haunting photo of the composer’s grandfather as a toddler in postwar Italy, suffering from severe pneumonia and dressed precipitately by the local priest in ceremonial garments in expectation of his imminent demise. The releases will continue through March 8, concluding with Joseph Schwanter’s “Daydreams…”, a composition for violin and four vocalists that is a warm rumination on a 1924 snapshot of his grandparents and infant mother.

The compositions are stylistically disparate, but each in its way directly invites the listener to consider the music in relation to the meaningful family photograph selected. Each image appears on the “Meditations” Web page, along with a back story provided by the composer explaining its personal resonance. The compositions form a mosaic of musical approaches underpinned by a shared quality of nostalgic reflection, however differently expressed.

Recording these original compositions presented its own challenges. “One studies Mozart for years,” says Kutik, whereas with “Meditations,” he was working off “sheet music while it was still wet.” The composers started sending him their work last summer, “and I had to figure things out fast.” Some pieces were ready on arrival, while others required back and forth with the composers over Skype. Kutik says that each composer heard a demo of their work before the recording process started, and understood where he was taking the music.

Kutik recorded the music in Boston over an intense three-day period that involved long hours and many retakes. Each composer “had the luxury of instrumenting their piece however they wanted to,” he says, and some his interpretations will only exist in recorded form, as they are too complex to be performed live.

In April, Kutik will premiere two of the works – Gity Razaz’s “Cadenza for the Once Young” (a wistful meditation on her Iranian grandparents’ “lasting love and decades of companionship”) and Andreia  Pinto Corriea’s “Litania” (a forceful dialogue between violin and piano that evokes a litany of “prayers organized in short invocations that alternate between soloist and assembly, producing a hypnotic effect” - at a recital with pianist Anna Polonsky at the Kennedy Center’s Terrace Theatre in the nation’s capital hosted by Washington Performing Arts.

The program will center on works from “Music from the Suitcase,” and will mark the first intersection between the earlier album’s classical works and the newly-created “Meditation on Family” compositions. It will be the first chance for Kutik to see how the older pieces that shaped his musical background might cohere with the new compositions he helped bring to life via his ongoing exploration of family and the emotional power of memory and artifact.

“My musical heritage is Russian and Jewish,” he says. “Professionally, it affects everything I play.”

More information about each piece, and the associated photo, visit: https://yevgenykutik.com/meditations-on-family/. iTunes, Apple Music, Spotify, Amazon are the platforms for digital release on March 8. The CD format will be released via Marquis Classics.