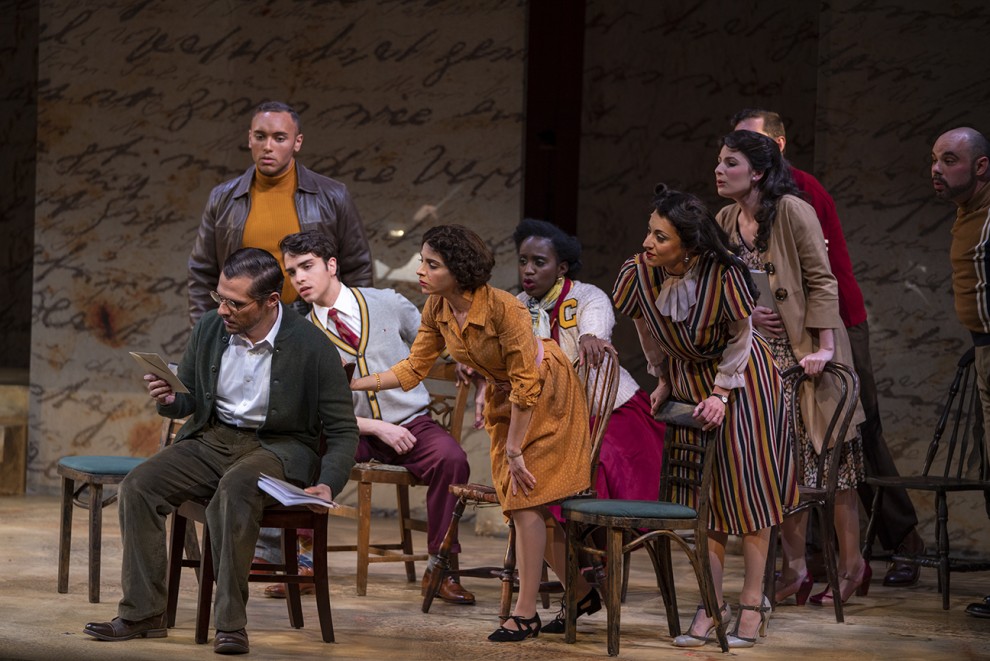 GREAT BARRINGTON – Ted Rosenthal is one of the finest jazz pianists working these days, a stylish, lyrical interpreter of standards and a noted composer in his own right. On August 6, he brings his first opera to the stage of The Mahaiwe for a one-night performance featuring performers from the New York City Opera (which commissioned the piece) and his trio.

Dear Erich is a profoundly personal work, Rosenthal’s response to a cache of 200 letters to his émigré father from his grandmother. She, along with his grandfather and other family members, was left behind in Germany as World War II approached. All perished during the Holocaust, a tragedy that Rosenthal’s father, Erich Rosenthal, a noted sociologist, never brought up. Rosenthal and his sister discovered the correspondence after his father’s passing, but the letters were not translated to English from German for nearly 20 years.

Dear Erich debuted last winter at New York’s Museum of Jewish Heritage, co-produced by the New York City Opera and the National Yiddish Theatre Folksbiene. The opera tells two stories – one about the courtship of his parents that took place in the lively jazz clubs of Chicago, and the other about the dramatic events detailed in the letters, which are dated between 1938 and 1941. Rosenthal says the core themes of the opera revolve around the immigrant experience in America and survivor’s guilt, according to Ted Rosenthal. As an academic, Erich Rosenthal was (as described by Encylopedia.com) “an expert in income distribution and acculturation. In particular, his reputation rests with his work in the demography of the Jews in America. Through his work on Jewish assimilation and group identity, he brought to national attention the high intermarriage and low fertility rates among American Jews.” So even though Jewish issues were central to his life’s work, Erich never talked about his family tragedy.

Rosenthal composed the music for the opera, and the libretto was penned in collaboration with his wife Lesley Friedman Rosenthal, the chief operating officer of The Julliard School in New York City. You may have noticed that Ted and his trio have been playing in the Berkshires and environs this summer – one reason is that the Rosenthals are Berkshires second-homeowners with a place in Otis. Lesley Rosenthal is also the president of Friends of ANIM, which supports the Afghanistan National Institute of Music (ANIM) in Kabul. She was instrumental in the evacuation of 273 school members (students, staff, and family) from Afghanistan to Portugal in the autumn of 2021.

The Berkshire Jewish Voice spoke with Ted Rosenthal about Dear Erich last May. Our conversation has been edited for length and clarity.

Tell me a little bit about the development of Dear Erich.

In 2015, I was invited by the historical society of a small town called Bad Camburg, Germany, where my grandmother grew up. They were restoring a religious school, not the main synagogue, which was burned during Kristallnacht. They invited back members of the Jewish community, and on the occasion of going to this event along with my wife, Lesley, I recognized that I had this box of letters that had been sitting in my attic. I’d never really thought much about them. My father never discussed them. They were letters written mainly by his mother to him after he was able to escape or emigrate to the United States in 1938. He received a fellowship at the University of Chicago and got all the necessary paperwork and support to get over here. But he was unsuccessful in getting the rest of his family over. He rarely discussed any of that, which is, as you know, probably quite typical.

So in Bad Camburg, I asked the head of the historical society, Dr. Peter Schmidt, whether he’d be interested in having a look at the letters and maybe translating a few for me. And he did, translating the last six, which were the ones I’d scanned and sent him. The letters began in 1938, when my father left in March, and ended in November of 1941. My father, in fact, never knew what happened to his mother and family that was left behind. That was, I surmise (since he didn’t talk about it), one of the most painful things about the experience. [Editor’s Note: Herta Rosenthal died in Sobibor.)

In any case, when the letters came back translated, it opened up a well of emotion and interest, a world that I hadn’t thought or known about. I asked Dr. Schmidt whether he would consider translating the rest of the letters, which he did; there were more than 200. My father saved them very methodically, in the German fashion as I like to say, and chronologically. And Dr. Schmidt translated them all very methodically. So within maybe six months or a little longer, I had all 200 of them translated. And going through them and reading them elicited such a strong emotional response that I knew I had to do something as a creative artist. I’m a jazz pianist and composer, and I decided to embark on writing a jazz opera based on all of these events.

Your focus has been musical. How did you shift gears and start thinking like a storyteller?

One of the all-encompassing aspects of how this project took over my life, in terms of the artistic part and the personal part, was that it is my first opera. The dramatic elements were a creative and learning process in terms of figuring out what is the story I wanted to tell. I had lots of interesting conversations with people, some of whom were considered as possible collaborators, and others who were people willing to talk to me about their expertise in the field.

Because I’m a jazz musician, I felt an integral part of this story was about freedom and democracy and improvisation. The things that jazz stands for and represents are a lot of what America represents. I knew I wanted many of these jazz elements of Chicago to be a part of the story, but obviously there are also the horrible events of the Holocaust and the experience of immigrants. So it’s largely a story of an immigrant coming to the New World, struggling to look forward and live his new life with his new family, but being tormented by the losses and the unknowns of the past.

How do you kind of reconcile the two and live this new life in the New World while you have so much that is painful and unresolved about the life and the people that you’ve left behind? It’s a big story that covers decades with flashbacks and various events. For me, it was a very fulfilling creative endeavor to learn more about presenting a musical drama.

And were you able to use some of the actual direct quotes from the letters?

Oh, absolutely, yes. There’s one song we called “The First Letter,” which has a lot to do with my grandmother being very concerned about how my father is getting along in the New World, in Chicago. How is his health? Does he like the food? Did he get the typewriter that they sent him? Things like that. And there’s a letter preceding the immigration scene that deals with the absolute difficulties, if not impossibilities, of emigrating [from Germany]. And the most heart-wrenching letter was a combination of two or three letters that I referred to in the opera as “the Kristallnacht letter,” in which my grandmother is describing how the men of the town were taken away. When they finally returned, my grandfather was extremely weakened and he shortly thereafter, he got sick and died.So yes, the letters are a big part, but not the only part of the libretto.

So let me ask you about the way it might have changed your perspective on your Jewishness. In my own life, I had a similar experience where a lot of my family’s history was kept under wraps, and then, as an adult, I learned the actual story. All of a sudden, things that always seemed strange now made sense. What kind of experience did you have reading these very personal family letters, and how did you relate to the experience as a Jewish person?

Well, I think one thing that’s abundantly clear almost immediately is how close my father was to his mother and how much she cared for him even long distance. So that relationship, which he spoke nothing about, clearly was cherished, but also painful in that he never learned what happened to her. So there were huge parts of his psyche and his life that he did not share; honestly, I don’t know how much he even shared with my mother because she didn’t, on her own, relate these things to me.

But again, the themes in the opera are of immigrants –  how they look forward but also look back. I think my father was doing his best to look forward and not burden me with these things. For me, it’s been a process because being a musician has been such a focal point of my entire life. But you get to be a certain age. I have a wife and two stepsons now in their twenties. Finally, I have a little more time to think about things than I had back when I was thinking about music. It wasn’t a complete accident that [I found the letters] back around 2000, and it took until 2015 for me to say, ‘Oh, let’s get these letters translated. Let’s have more interest in this family history.’

So in learning about the story, the Jewishness part is tricky because my grandmother, clearly in some of the letters, was urging my father to visit the synagogue a little more often than I think he was inclined to. I think he was more interested in his academic world than in the religious world, and I was not given much of a religious upbringing. But of course, I feel very Jewish in every way – I just didn’t have that kind of religious training. One of the things that religion certainly does to you is connect you to the past. Not only to your own family but to your tribe, so to speak. So, I definitely have more of that feeling. And I guess it’s unfortunate that many people with this Holocaust background might get cut off from it because of the disconnect to what happened in one’s own family history.

Dear Erich: A Jazz Opera by Ted Rosenthal will be presented on Saturday, August 6 at 7:30 p.m., at The Mahaiwe Performing Arts Center, 14 Castle Street in Great Barrington. For tickets and information, visit mahaiwe.org.

Ted Rosenthal will be performing with his trio on Saturday, August 13 at the White Church of Blandford Summer Concerts in Blandford, MA (thewhitechurch.org/concert-series. For more information on Rosenthal, visit tedrosenthal.com and dearerich.com.