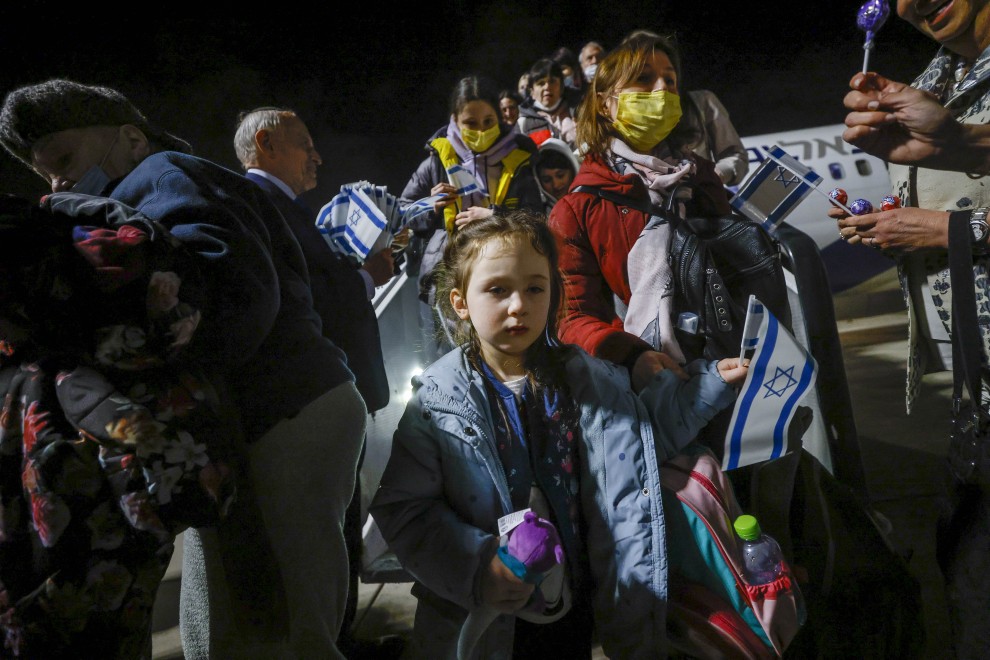 Kyiv native Natasha Dresner spent the first 25 years of her life in Ukraine and has lived in the Berkshires for two decades. She is an organizational development consultant and mentor with JCamp 180, a program of the Harold Grinspoon Foundation in Agawam, and has previously served our local community as executive director of Knesset Israel in Pittsfield and as Federation’s 2020 Super Sunday co-chair (along with her husband, Avi, and sons Lev and Sasha).

Before coming to the United States, Dresner spent five years working in Ukraine for the American Jewish Joint Distribution Committee (JDC) as its head of finance there – she says she has many former colleagues and long-time friends in the country. In the weeks after Russia invaded Ukraine, the Berkshire Jewish Voice asked Dresner to share some personal and professional insights about the evolving situation in Eastern Europe and how Jewish relief organizations will be able to respond to the crises.

Our conversation was edited for length and clarity.

Berkshire Jewish Voice: My first question is to you as an émigré. I assume you remember how life changed from when Ukraine was a vassal state to the Soviet Union to it becoming a more democratic, Western-focused society. How do you feel about this potential step backward?

Dresner: As a teenager, I lived through seeing the Soviet Union falling apart. I don’t think there is even the right word to describe what is happening now – it’s terrible. It’s dangerous. It’s the worst nightmare. Unfortunately, if you ask people like me, many would say we knew that this day might come. When the Soviet Union fell apart, many of us knew that it might be like Moses and the Jewish people when they left Egypt – the 40 years in the desert were about mentality change, the mindset shift from being slaves to free people. The same thing here. Democracy doesn’t come overnight because it’s not just a set of activities. It’s a mindset. In Russia, because of its leadership, the mindset never really changed, not at the top. It didn’t want to be part of the democratic world and held grudges against all of the former 15 republics –  first and foremost, Ukraine. At the end of the day, like with any war, it’s the ordinary people who are paying the price.

Dresner: When Ukraine was still part of the former Soviet Union, and even in the earlier stages of the post-Soviet era, the idea was that we [Jews] are a ‘nation’ or we are a people within the people. [Ukraine] is the place we live in, but Jews kind of stick together and stand for each other. Everybody else is a foreigner, for the lack of a better term, or everybody else is not necessarily going to understand us. That came from all of the experiences that we as Jews had up until that point – antisemitism, constant discrimination in terms of jobs, entering universities, or degrees, or even just the language that was used toward us at school.

The last time I was in Ukraine was in April 2019, for work and then to spend time with my colleagues from the JDC and school friends. The country changed quite a lot – Jews were more than accepted but celebrated by the Ukrainians. Some of my friends back in Ukraine would say, ‘You know, it’s now kind of hip to be Jewish’ – almost exactly reversed from the past. I did not live through that myself, but this is what I’ve heard from my friends and people who are Jewish and still in Ukraine. Of course, there’s the fact that Zelensky is the only Jewish president.

This change happened over the last 20 years, or 15 years. From that point on, I think Jews started associating with Ukraine, and with their Ukrainian identity and the language and culture, much more.

BJV: Many Jewish institutions, such as JDC, JAFI, World ORT, and Chabad, have made significant inroads into Ukraine. How resilient can these Jewish institutions remain in their outreach to Ukraine? Say in a best-case scenario that Ukraine continues to be a Democratic country free from Russia, and in a worst-case scenario that it once again becomes under the control of Russia.

Dresner: Under the best-case scenario, I think Jewish institutions have a very good chance because the majority of support that I’m hearing about in terms of humanitarian help within Ukraine – helping people get out, or in finding shelter, food, and water – is organized by Jewish institutions. One that I would also mention is the Hashomer Hatzair movement that always had a presence in Europe, and in the last 15 to 20 years has established quite a prominent presence in Ukraine. This is a youth movement – young men and women, quite ideological. They’re helping people who aren’t Jewish. Nobody’s asking about that line that used to exist back on Soviet passports that listed your nationality (ethnicity). Everyone is a Ukrainian.

Under the worst-case scenario, because of what Putin is doing now with his propaganda about ‘the neo-Nazis in Ukraine’ and all of that – I think he’s going to continue using sort of that narrative to invoke something that, unfortunately, is still very familiar to the people. Less so to the younger generation, but still too familiar to a lot of people of my generation and certainly my parents’ generation, in terms of ‘there is us and then there is them’. Since the antisemitism is not ancient history, I can see things reverting very quickly to something that is familiar. The worst-case scenario will be a very good environment basically for those types of things, like antisemitism, assigning the blame, dividing the nation. It’s like a default behavior. I’m really worried that under the worst-case scenario, the default behavior will come back very quickly and a lot of people will revert to that, even though in Russia, the Jews seem to have been embraced, as well. So I don’t know.

BJV: I’m sure that a lot of people who have signed on to work in Ukraine probably did so under the assumption that things were stable and getting better for the Jews, and also for free society in general. Will institutions like the ones that we mentioned still be able to operate there in the way that they’ve grown accustomed to over the last decades?

Dresner: Ukraine has very close connections with Israel. Most Jewish institutions don’t really have American staff. The model is that you get Israeli shlichim in the upper management or the top leadership, very often Russian-speaking Jews who immigrated to Israel. Otherwise, it’s the local Ukrainian staff, or Russian or Moldavan or Georgian, you name it. From that perspective, I think they have everything they need, local resources and connections and knowledge of the system. Yet financial support comes from [Jewish organizations from outside Ukraine], something that other institutions [in the country] do not necessarily have. So from that perspective, as long as the environment is still welcoming to the Jews overall and they’re not forbidden from literally existing or functioning or doing their work, I have every confidence that those Jewish institutions would not only be allowed to function but would be once again welcomed and embraced by the rest of the country in its path of dealing with this situation and recovering.

BJV: With all this tension and worry about what’s going to happen in Ukraine, I found myself thinking about how something like this happens to Jews every eight months or so when the rockets start raining down on Israel. For us as Jews, the feelings evoked are not as weird nor as unprecedented as they might be for Ukrainians and also for the rest of the world.

Dresner: Yeah. And to a degree, this is helpful because it’s almost like we’ve been there, even if not literally ourselves. We’ve heard from our ancestors. On the other hand, it is so unhealthy to live in this mode where this is your expectation, where you live with this constant feeling and thought in the back of your head that sooner or later, your worst nightmare is going to happen. Most Americans and those people lucky enough to be born and live in countries where all they’ve known are peace and democracy and logic and having a conversation to resolve differences, this comes as a huge shock. But at the same time, those are the more hopeful people and healthier people, because psychologically, it’s a huge burden to live with – constantly waiting to be running again or surviving again. That’s the Jews in Ukraine right now, although the rest of Ukrainians are probably that way, too – and not only because of [Russia’s incursion in] 2014, although that’s the most recent. They’re also not new to conflict or to the need to survive.

BJV: Is the Harold Grinspoon Foundation doing anything that you might want to highlight?

Dresner: One kind of natural extension would be through PJ Library. One of the purposes of the trip I mentioned earlier in 2019 when I went with HGF to Kyiv was to establish a branch of PJ Library in Ukraine. We hear a lot internally about how we’re continuing to work with directors of the program both in Russia and Ukraine. There is an understanding that what Russia is doing is wrong, but at the same time, we want to support the Jews in Russia regardless. And so, there’s been a lot of support for the staff of PJ Library, and then through them, to the Jewish community.