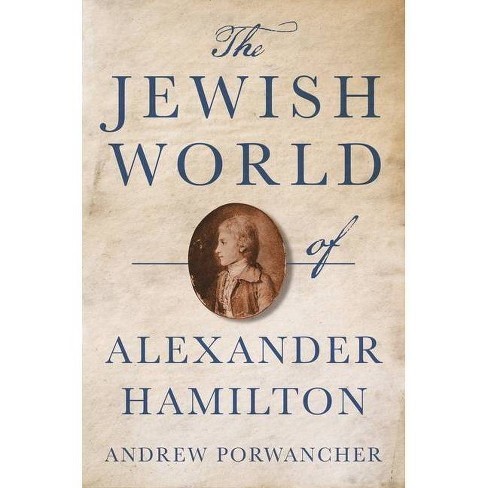 GREAT BARRINGTON – After a two-year hiatus, the Jewish Federation of the Berkshires’ popular Knosh & Knowledge returns with a summer lineup of compelling speakers.

On Friday, June 24 at 2 p.m., join us as Professor Andrew Porwancher discusses fresh evidence that Alexander Hamilton was born Jewish. He’ll explore Hamilton's alliance with American Jews at the dawn of the republic in a talk based on his book The Jewish World of Alexander Hamilton (Princeton, 2021), winner of the Journal of the American Revolution Book of the Year Award.

Knosh & Knowledge programs take place at Hevreh of Southern Berkshire, 270 State Road in Great Barrington. For more on this free program and other Federation events, visit our calendar of events at jewishberkshires.org.

Proof of vaccination and masking is required at indoor Federation events.

In his book, Andrew Porwancher debunks a string of myths about the origins of this founding father to arrive at a startling conclusion: Hamilton, in all likelihood, was born and raised Jewish. For more than two centuries, his youth in the Caribbean has remained shrouded in mystery. Hamilton himself wanted it that way, and most biographers have simply assumed he had a Christian boyhood. With a detective’s persistence and a historian’s rigor, Porwancher upends that assumption and revolutionizes our understanding of an American icon.

In May, Professor Porwancher spoke to the BJV about his book about one of the most influential and enigmatic Founding Fathers of the United States. Our conversation was edited for length and clarity.

So much has been written about Alexander Hamilton. What convinced you that there was something about his possible Jewishness that needed to be explored?

It's long been known that Hamilton had a mother named Rachel Levine and that Rachel enrolled him in a Jewish school on [Nevis,] the Caribbean island where he grew up. And I thought that these facts, which had been looked over by Hamilton scholars, would, for anyone else, be taken as creating a strong presumption of that person's Jewish identity. And so, I was deeply skeptical about the inherited wisdom that Hamilton was a cradle-to-grave Christian and got a grant to go down to the Caribbean to begin testing my hypothesis. And this took me on a seven-year journey in archives on both sides of the Atlantic, culminating in the publication of this book.

You write that Rachel converted to Judaism to marry Hamilton’s father Johann Levine, and that she stayed connected to the faith after the marriage did not work out.

His name appears under a variety of spellings, Levin, Lewin, Levine. A number of these spellings match how Jews of Levitic descent spelled their surnames at that time. Rachel is born into a French Huguenot family, so her family are Protestants who had left France under Catholic rule and found a home in the British Caribbean on Nevis. Rachel is unquestionably born a Gentile. My claim is that in all probability she converts to Judaism in order to marry Johann Levine. Hamilton's enrollment at a Jewish school at a time when, to the best of our knowledge, Jewish schools anywhere in the world, exclusively educated Jewish children, creates a very strong presumption of his Jewish identity, and therefore a strong presumption that she continued to identify with the Jewish faith into which she converted.

So for a man of his time, what would Jewish identity represent? I know there's the cultural aspect, but as you allude to in your book, there might be a religious outlook, as well – that his being a Jew is part of God’s plan. How would he have carried his Jewish identity for the rest of his life?

This is the central question and one that eludes concrete answers. We know that Hamilton, in his American adulthood, identifies at least nominally as Christian, does not practice Judaism, nor does he divulge to anyone his Jewish past. It would have been problematic for a statesman seeking acceptance into the upper echelons of American civic life at that time to have a former identity as a Jew in his Caribbean youth. And yet Hamilton emerges as the foremost advocate of American Jewry among the founders. And so, to the extent that we see the reverberation of a Jewish upbringing in Hamilton's adulthood, it is in his advocacy for American Jews at a time when antisemitism had real political cachet – as opposed to Hamilton attending shul three times a week in New York City.

Historians that the dichotomy in American political thought is the Jeffersonian approach to government versus the Hamiltonian approach. In terms of Hamilton’s political outlook – a more centralized government, a more top-down style of governance – do you see anything Jewish thinking that might have influenced that aspect of his political thinking?

It's weird –  I got an email just today from kind of a kook who was writing about Jefferson and Hamilton, and Hamilton's connection to the freemasons and the Rothschild family in starting the Bank of New York, and how it’s all still a part of the elites’ plan to rule the world. So Hamilton still inspires these wacky theories. As well as accusing him of being Jewish, his political enemies used to accuse him of having had African ancestry, correct?

You're correct. But there's no evidence in the historical record that would corroborate that theory.

In your book, you write that it's not just a biography of Hamilton. It's also a portrait of Jewish life in the colonies and the early years of the United States of America. What was their status?

The status of the Jew in any given society matters greatly because the presence of even a single Jew in a society forces upon that society the question of whether Jew and Gentile will stand upon an equality or whether Jew would be relegated, as was so often the case, to some kind of second-class citizenship. This perennial question takes on particular significance in a newly-conceived American Republic, which was dedicated in the name, if not quite yet, the reality, to equality. The question of whether Jews and Gentiles would be equal in this new Republic was a litmus test for what kind of nation America would be. So even though there were relatively few Jews, perhaps a tenth-of-a-percent in the country, the status of Jews assumed outsized significance in debates about rights in the early Republic because it spoke directly to America's self-definition. It spoke directly to the question of whether America would fulfill or forget its founding creed of equality. What we find is our outspoken figures on both sides of this debate. There are prominent “gentiles” like Hamilton who are in favor of Jewish equality. There are those who often reach for the cudgel of antisemitism as a political weapon and try to relegate Jews to some sort of subordinate status in American civic life.

And there are Jews themselves who, in a way that we don't see in Europe, are speaking out in defense of their own rights. This is a Jewish community that fought and bled for the revolutionary cause, and in the wake of the revolution, they challenged their Christian neighbors to make good on the American promise of equality.

A native of Princeton, New Jersey, Andrew Porwancher earned degrees from Brown and Northwestern before completing his Ph.D. in history at Cambridge. Currently, he serves as the Wick Cary Associate Professor at the University of Oklahoma and the Ernest May Fellow at Harvard University’s Belfer Center. In 2017, Porwancher won the Longmire Prize for innovative teaching. He is now at work on his fourth book, Theodore Roosevelt and the Jews (Princeton).