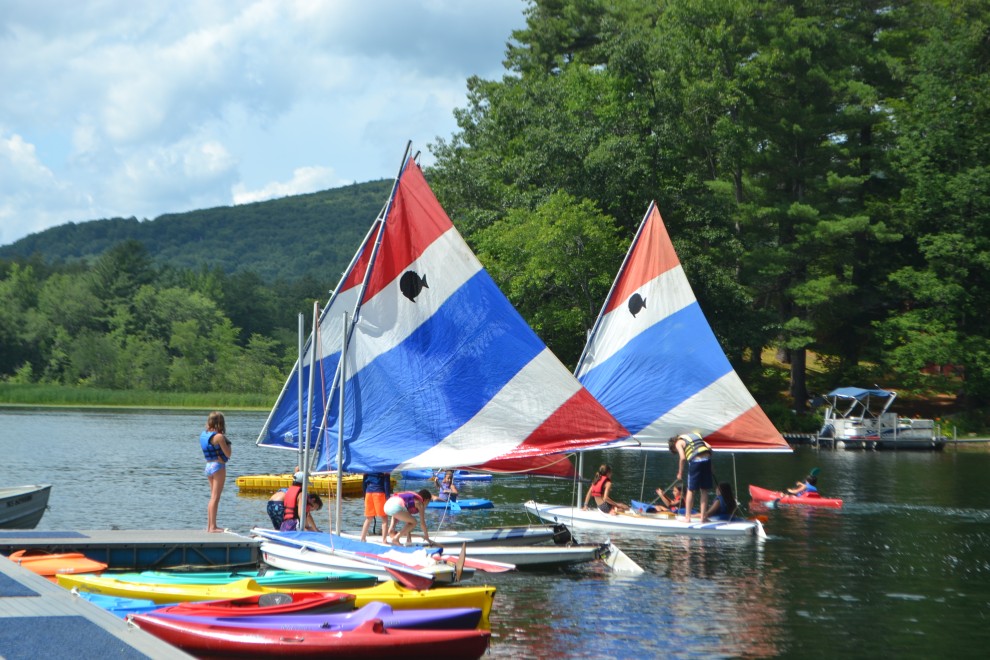 Over the past two years, the Berkshires as welcomed an influx of residents and businesses, newcomers who are changing the complexion of our Jewish community. This new column, Bruchim HaBaim (a Hebrew greeting of welcome, literally ‘Blessed are those who come!’), will share some of our new neighbors’ stories.

This time, we feature Arnon Rabin, North American vice president of Camp Kimama, an international network of summer camps started in Israel that bought the venerable Camp Half Moon in Monterey in December 2021. This summer, Kimama Half Moon will welcome its first season of day and overnight campers. In a conversation with the BJV in February, Rabin shared the Kimama approach to Jewish camping and why the company chose the Berkshires for its third property and first sleepover camp in the United States.

Our conversation was edited for length and clarity.

Berkshire Jewish Voice: Please tell us about Camp Kimama’s Israeli roots and its expansion in different parts of the world (including Spain, Italy, and the Canary Islands).

Arnon Rabin: Kimama opened in 2004 and was founded by Ronen Hoffman – who is now the Israeli ambassador to Canada. He did many, many other things – he was a Knesset member and was Prime Minister Rabin’s advisor. But like many of us in the management of Kimama, when he was younger, he started as a shaliach (emissary) of the Jewish Agency For Israel to a summer camp in the United States. We had never experienced anything like that before. I grew up in a kibbutz, and I remember how surprised I was when I went to work in an American summer camp. There’s nothing like that in Israel culturally. In Israel, you have a lot of day camps, but when it comes to the overall experience of what a summer camp can provide, we were blown away.

There’s something so immersive, both educationally and experientially, and in terms of the potential transformation that a camper can go through. Camp becomes a significant and prominent place, a true home away from home, a place for campers to experience and grow and challenge themselves. This is something that I think we all fell in love with. We wanted to bring this to Israel, but also to make it international and to spice it up with the Israeli DNA.

We started with 50 campers in the first year. Last year, we had 6,500 campers in three different locations in Israel from 40 countries around the world. There’s something about the meeting of Jewish cultures from so many different places, from the United States and obviously from Israel, but also from Europe or Morocco or Japan or Mexico. There’s something about bringing this Jewish community into one place and offering a true participatory experience of meeting each other without the borders of tourism. It’s based on the culture of an American summer camp, but once we made it international, once we made it bilingual where we say everything both in Hebrew and in English, once we brought a lot of Israelis to participate, it became something that saw a lot of added value both in the Jewish aspects and in the Israeli aspects.

BJV: How would you explain what the Jewish and Israeli aspects are?

Arnon Rabin: There’s something about offering a true encounter with Israel and with Israelis that immerses the campers in what it means to be Jewish and what it means to be Israeli today that is much more diverse and open-minded. An example: Every Shabbat, one of the activities we have in camp is a Shabbat discussion where each of the campers shares what Shabbat is for them. It’s amazing to see how different and diverse Shabbat can be for the Israeli camper who lives in the city, for the Israeli camper who lives in a kibbutz, for the camper who comes from a very closed and detached community like Mexico City, for an American camper who comes from a more progressive or Reform community, for the camper who has a non-Jewish parent and a Jewish parent and who is living in Asia.

There’s something about opening up the possibilities for this meaningful encounter that I saw over the years that enriched the campers and opened their minds to what it means to be Jewish and how we are connected, although there are so many differences. When it comes to the Israeli aspects, I think that we are an Israeli camp. All the standards are very American, and we took the American culture of summer camps when it comes to the screen-free environment and being connected to nature, and having meaningful educational experiences within the camp. We wanted the camp to be bilingual. We wanted campers to be exposed to Hebrew not through a Hebrew school. And therefore, this is part of the experience because, at the end of the day when you’re sitting in a bunk where you have one camper from Israel, one from the United States, one from Europe, and one from Asia, they need to find a way to communicate with each other.

We’re putting a lot of emphasis on Israeli music and Israeli contemporary culture and Israeli dance and Israeli landscapes. But with the program that we’re building here in Kimama Half Moon, it is important for us to bring the vast majority of our counselors from Israel.

BJV: So in terms of camp Half Moon, I know from the Berkshire Eagle article that you intend to maintain the legacy, but also invest another million dollars in the property. In terms of where it’s at now, do you have everything you need to get started?

Arnon Rabin: If anyone else would purchase this camp, I’m not even sure if they would put any budget into a renovation. This camp has a long history of happy campers who have been coming there for 99 years. We have the privilege of continuing this legacy on the 100th anniversary. But I also think that we have the privilege of rethinking what a summer camp should look like in 2022. When you look historically at the culture of summer camp, the vast majority of camps that are very old have traditions that are…I wouldn’t say “stuck,” but they’re doing the same thing over and over. We have the privilege to start something from scratch, in a way, but we also bring a lot of our experience and the uniqueness of our program that we enhanced during our years in Israel.

We want to rethink what a cabin should look like, what a personal space for each camper should look like. We’re working now on rethinking all the food aspects, the culinary aspects of camp. We want to bring an Israeli chef to have a more Israeli, healthy, fresh cuisine in camp. We want to eventually create some sort of greenhouse or farm in camp where the campers will be able to participate in an activity in seeing and touching and feeling the food that they’re going to eat in the dining hall. I think that in 2022, farm-to-table in restaurants might be something that is expected. But will it be part of the educational experience of allowing the campers to be more connected to nature?

BJV: How are you prepared to manage COVID, particularly what it might have done to some of the kids out there psychologically? And second, just some of the safety precautions that parents might want to know about when they’re considering Kimama.

Arnon Rabin: First of all, when it comes to dealing with the effect of COVID on the campus, this is something that, unfortunately, we’re not seeing for the first time. We see more campers with anxiety, more campers who are homesick. We see more campers who find it hard to socialize with their peers. Screens and lack of meaningful encounters with peers are not something new because of COVID, but both have been exaggerated in a very troubling way. Fortunately, I find summer camp to be one of the best solutions to all of the above. There’s something about entering the bubble of a summer camp, putting away your phones, putting away your screens, submitting yourself to an experience that is not always easy, but one that is being monitored by a mature staff that knows how to provide emotional support for the campers. I think that the fact that we’re operated for so many years in an international structure has forced us to be hypersensitive to differences and to the sensitivities of the campers. Unlike at many other camps, our staff is much more mature and experienced, both in age and in their educational experience. This is why we bring many of them from Israel. They’re all 21 and up and selected and screened both by JAFI and by us.

BJV: The camp is open for both Jewish and non-Jewish campers. What makeup are you anticipating?

Arnon Rabin: I’m anticipating that the vast majority would be Jewish or will have a connection to Israel. We are open and welcoming to everyone. The day camp portion is probably going to be based on the local community and not necessarily on the Jewish community, but for the overnight, I’m assuming that most people who will send to Kimama will send their children to Kimama because of the Jewish and Israeli aspect.