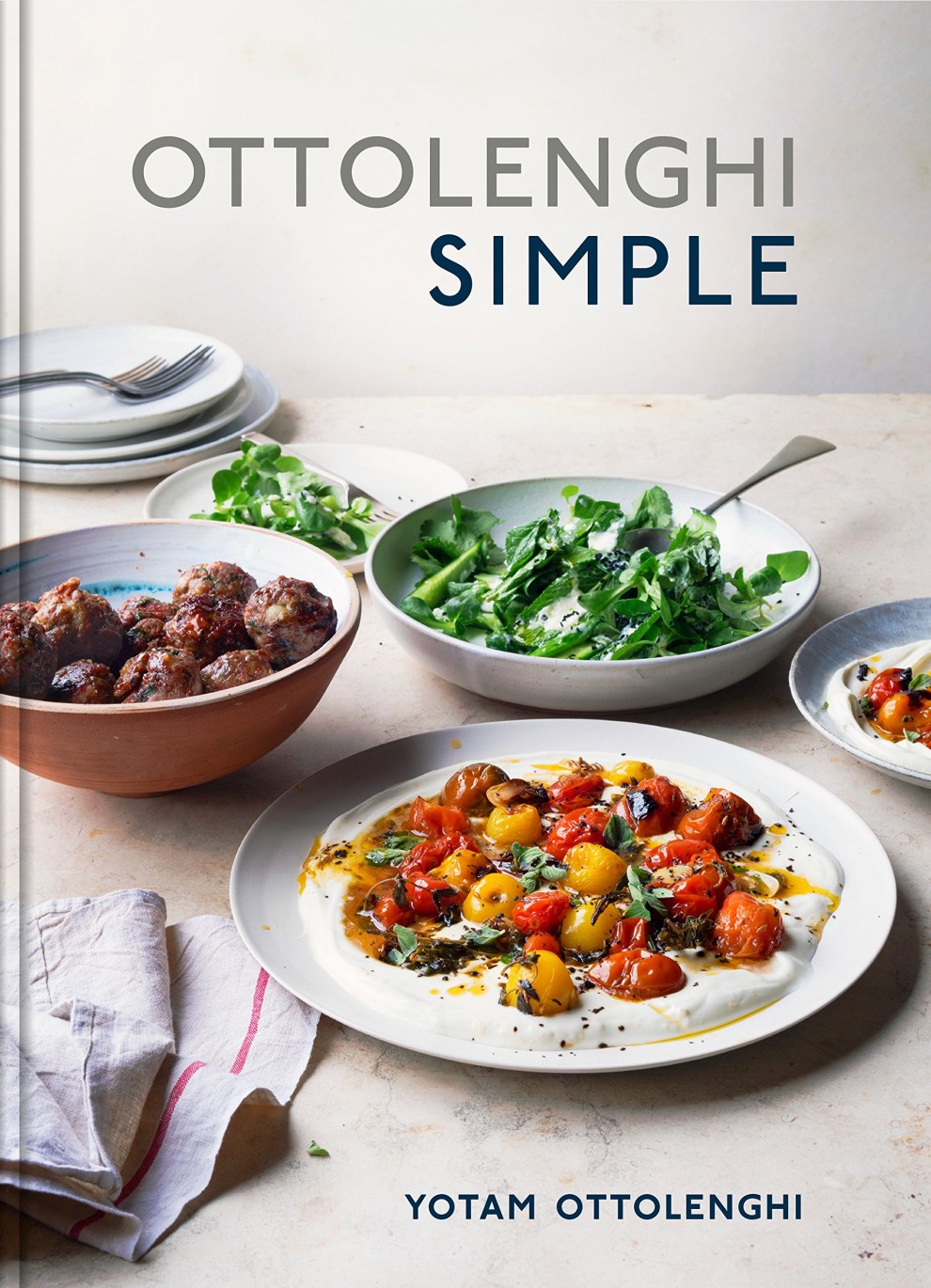 Simple is not just the title of this newest cookbook by Israeli chef Yotam Ottolenghi. It is the chef's attempt to help readers prepare fabulous recipes at home with a minimum of fuss.

Sounded good to me. As much as I love to cook, I admit that Ottolenghi's Jerusalem had me scrambling for such exotic ingredients that I was sure I would need a Sherpa to forage for me. The list in Simple is admittedly shorter, but the chef doesn't completely abstain from the unusual (kaffir lime, anyone?) He also insists that home cooks stock ten essential ingredients in their pantries, and they are, again, exotic. Among those listed: include barberries, black garlic, urfa chile flakes, and preserved lemon.

To further assist the reader, Simple is also an acrostic, its letters standing for:

Fair warning: The recipes in this cookbook are not all kosher. Some dishes call for mixing meat and milk, others that require out-and-out treif. However, there were more than enough recipes to test, particularly those for vegetable dishes in the first half of the book. Herein are the results of my trials.

Let's start with an appetizer. Roasted whole cauliflower is a big thing now in Mediterranean and Middle Eastern restaurants, but I have to admit that the only time I had tasted it before now I was disappointed. Ottolenghi's version, however, is outstanding. Boiled briefly in water, then roasted in the oven and basted with butter and olive oil, all three of my tasters gave it an A+. The chef suggests serving it with his Green Tahini Sauce. With or without the dip, this recipe is a keeper.

I love soup, and it was still cold outside the day I made the Curried Lentil, Tomato, and Coconut soup, so something hot was called for. Rated IML, and it is indeed super easy to make. More important, it may in fact be among the most delicious soups I have ever had. Another A+

On to entrees. We had to search several stores to find puy (French green) lentils for the Puy Lentil and Eggplant Stew. Once we found them, the stew was easy to make, but the taste was only okay, maybe a C+. However, the Bulghur with Mushrooms and Feta had a lovely mix of flavors and textures. I'd give that a B+

Unlike its more familiar, pillowy-soft cousin made with potatoes, Gnocchi alla Romana is prepared with semolina. It made for a beautiful presentation in the dish and had a silky smooth texture, although I would advise charging up the flavor by using a bit more strong cheese as the semolina is mild. B+

Since Ottolenghi is a sabra, I was very excited to try his Seeded Chicken Schnitzel, anticipating memories of my time living in Israel, when I prepared a lot of the dish in my tiny Rehavia kitchen. Panko crumbs, sesame seeds, and sunflower seeds made for a very crispy exterior, and the interior was nice and juicy, but even with cayenne, coriander, and turmeric added to the mix, there was surprisingly little flavor in the fillets. C+

We all know that salmon is good for us, and one of the star recipes in Simple — Bridget Jones's Pan-Fried Salmon with Pine Nut Salsa — makes it absolutely scrumptious. As a bonus, the story behind it is funny. As Ottolenghi explains, "This is the dish Patrick Dempsey’s character tells Renée Zellweger’s Bridget Jones that he would have brought her on their imaginary second date in Bridget Jones’s Baby. 'From Ottolenghi,' says Dempsey, 'delicious and healthy!' And easy, we might add! What sounded like a bit of product placement on our part was in fact no such thing. The recipe didn’t even exist on our menu, so this is a retrospective acknowledgment." A+

This recipe couldn't be easier or more delicious. However, since I am one of those people for whom fresh cilantro tastes like soap, I have substituted the dried herb in this recipe.

Heat oil in a medium saucepan over medium.

Add curry powder, flakes, garlic, and ginger and continue to fry for about 2 minutes.

Pour the coconut milk into a bowl and gently whisk until smooth and creamy. Set aside ¼ cup — you'll need this when serving — and add all the remaining coconut milk to the soup.

Bring to a boil, then decrease the heat to medium and simmer gently for 25 minutes, until the lentils are soft but still holding their shape.

Add a little bit more water — about 7-10 tablespoons — if your soup needs thinning.

Divide soup among four bowls, drizzle with the reserved coconut milk, and sprinkle with more cilantro.