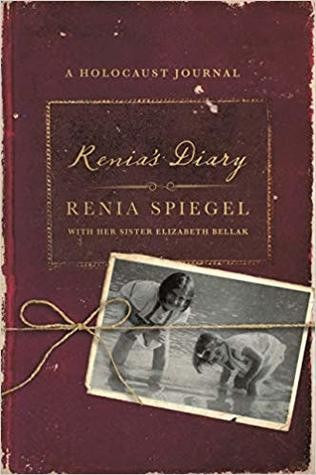 Review by Roberta Silman / Special to the BJV

Sometimes the story of how a book finds its way into the world is as interesting as the book, itself. This is true of Renia’s Diary, which is the diary kept by a Jewish girl when she was almost fifteen until she was eighteen, during 1939-1942 while she was living with her grandparents in southeastern Poland. Although Smithsonian Magazine has anointed this book by calling Renia “the new Anne Frank” and although the book will undoubtedly receive a lot of attention because of its very nature, I think it fair to say that Renia’s Diary is not as compelling nor as well-written as The Diary of Anne Frank, which is, after all, a very high bar. Certainly, the circumstances in which Renia lived were very different from the captivity in which Anne and her family found themselves.

But let me start with how the book came into existence almost 80 years after it was begun. There were two daughters in the Spiegel family, Renia, born in 1924, and Ariana, born in 1930. By 1939 the parents, Bernard and Rosa, were estranged, and Rosa was living in Warsaw with Ariana, who was already becoming known in films as “the Shirley Temple of Poland.” Bernard, whom they called Ticio, lived far away on his family’s estate and seemed to have little interest in his daughters. Renia was deposited in Przemysl with her maternal grandparents, where she attended high school, made friends, saw movies, worried about clothes and the changes in her body, kissed boys, thought she was falling in love, and then, finally did fall in love with a young man named Zygmunt. It is actually Zygmunt who comes out as the hero of this book, a boy, really, who tried to rescue both sisters. In the end, saved only Ariana, but managed to bring Renia’s diary to America, where he found Rosa Spiegel living in New York City sometime in the early 1950s.

By then Rosa was living with a different name, religion, and husband, and wanted nothing to do with a diary written by her Jewish child who had been shot by the Nazis in the summer of 1942 in Poland. She tucked it away in a drawer, and after she died, her daughter Ariana, now called Elizabeth Bellak, found the diary. Elizabeth, in turn, put it in a safe deposit box at Chase where it remained for more than 40 years. It was only when Elizabeth’s daughter Alexandra found it around ten years ago that this project towards publication began. It is worth noting that Elizabeth confesses in the preface that she still has not read all of it; she says, “I couldn’t bear to read it. It was just too emotional for me.”

So, through the efforts of her niece, Renia Spiegel has been given a second life. And we have an account written in real time of what it was like to see a small town engulfed by the Nazis and the disasters of war. As I have indicated, there is no happy ending here, but the value of such a journal as Renia’s is made clear by Deborah Lipstadt in her introduction: “Diaries are fundamentally different from memoirs because they are contemporaneous accounts. Simply put, the author of the memoir knows the end of the story. The diarist does not.”

What comes clear through the entries and many poems Renia wrote is that she was a brave, talented, observant, determined girl who wanted to leave a mark in the world — which is why most people keep diaries — and that although she is at times silly and frivolous and exasperating and self-centered, she is also bearing the burden of her teenaged years without either parent, with grandparents who probably tried to give her comfort but were just too old or too busy trying to survive. She has no one to give her advice about the vagaries of the teenaged girls who were her friends, and sometimes became her enemy; she had no one to whom she could pour out her feelings about the boys she was liking or even loving; she had no one to tell her about sex; and she had no one to protect her emotionally from the violence, both from the Russians and the Nazis, that was constantly invading their lives in Pryzemysl. Although the Spiegels were not observant Jews, Renia’s belief in God seems very strong and grows stronger as she matures, almost as if she knows there is no one else who can help her. She often seems to live on hope, and her belief in the future is one of the most poignant things about this diary. But what comes through most searingly is her longing for her mother, which is at times excruciating; she ends each entry with “You will help me, Bulus and God,” (she and Ariana called their mother Bulus). Here is Renia’s reaction to some of the daily brutality she witnessed.

Yesterday I saw Jews being beaten. Some monstrous Ukrainian in a German uniform hit everyone he met.  He hit and kicked them, and we were helpless, so weak, so incapable. . . . We had to take it all in silence. And at that moment my only consolation was the thought of revenge, oh, yes revenge is sweet, but it should not be bloody. And I want to live until the moment when I can hold my head up high, when I’m an equal, free person in a free, democratic country! I want to be happy with Zygu, with everyone who had gone through this hell of dishonor, slaughter and humiliation. I want to be happy, I want my dreams to come true, and you will help me with this, God, because I believe in You, because You have never let me down! [pp. 151-152]

The terrible irony in this book is that as Renia finds her own voice and becomes surer in her love for Zygmunt, her world falls apart around her and she knows that she must retreat to her dreams. Yet always, there is hope, and then death.

This is a very sad book that will surely take its place in the Jewish canon. But what interests me as I read, and re-read certain passages, is how very sad the story of this family is, their ambivalence towards their Jewish faith, their inability to nurture and ultimately save Renia. Strangely, they and the people who have facilitated the publication of Renia’s Diary seem to feel triumph. But what I am left with is the sadness of how this teenager was abandoned by the very people who should have protected her most, and how even after her death they could not deal with what she had to tell them. It is not a pretty story. So, in the end, I reserve my highest praise for her niece Alexandra who had the courage to face all that had to be faced and help bring Renia’s story to light.

Roberta Silman is the author of four novels, a short story collection, and two children’s books. Her new novel, Secrets and Shadows is in its second printing and is available on Amazon and at Campden Hill Books. It was chosen as one of the best Indie Books of 2018 by Kirkus. A recipient of fellowships from the Guggenheim Foundation and the National Endowment for the Arts, she has reviewed for The New York Times and The Boston Globe, and writes regularly for The Arts Fuse. More about her can be found at robertasilman.com and she can also be reached at rsilman@verizon.net.