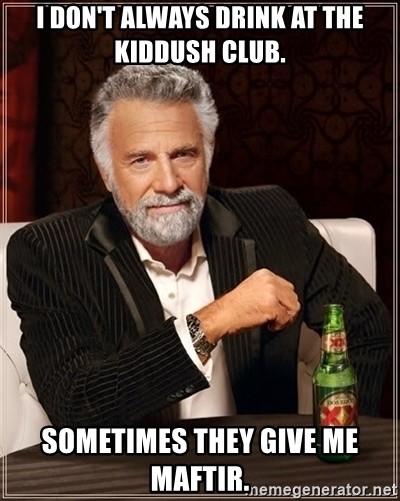 This is the second installment of our bronfin (whisky) correspondent’s history of Jews’ relationship with the liquor industry and the products it produces. By and large, the business has treated us well, although its products perhaps have been more of a mixed bag (despite Jews’ reputation for moderation). A new appreciation for craft whiskys has birthed “kiddush clubs” at many synagogues across the country, leading contemporary rabbis to re-examine old texts to determine whether the spirits produced today adhere to established laws of kashrut.

So how has the Jewish connection with alcohol affected our people? Here are some thoughts.

Liquor Barons of the 20th Century

The coming of Prohibition in the 1920s and the Great Depression of the 1930s created new economic opportunities for North American Jews. Yekhiel Bronfman and his sons arrived in western Canada in the 1880s. Although he came as a wealthy grain farmer from the Pale of Settlement, he soon lost his savings. After several business reversals, the family purchased a small hotel with a bar. The bar threw off most of the profit, and the family saw its future. The sons foresaw the profit to be made if prohibition laws were passed in the United States and, still based in Canada, they built a distillery in Quebec. From their base near the border and the St. Lawrence River, they used “creative” thinking to sell liquor that somehow found its way into the United States during Prohibition by questionable and later by more conventional means. Their company, Seagram’s, eventually became a liquor industry giant.

With the repeal of Prohibition, Cincinnati-born Lewis Rosenstiel (an indicted but never convicted bootlegger and friend of Meyer Lansky) bought up several distilleries and formed Schenley Distillers Corporation. It soon became one of the largest liquor companies in the United States. Meanwhile, in Chicago, Philip Blum invested in and then owned Jim Beam. Perhaps the most famous of these entrepreneurs was the Kentucky-based Shapira family, founders of Heaven Hill in 1935. With the addition of bourbon brands Elijah Craig and Evan Williams, their products are the top-selling bourbons in the United States. The Heaven Hill Bourbon Heritage Center in Bardstown, Kentucky, features two Stars of David embedded high in its rafters.

Abe Rosenberg became partners with Charles Guttman in the 1950s in the Paddington Corporation, which distributed J&B scotch whisky in the United States. Contrary to what my father’s friend told me when the landsleit made a l’chaim at my bar mitzvah, J&B did not stand for ‘Jewish Booze’; rather, Justerini & Brooks was the highest-selling scotch in the United States in the 1960s.

The 21st Century ‘Kiddush Club’ & The Problem of Overindulgence

Most Jewish and non-Jewish leaders, scientists, doctors, and other self-anointed experts have trumpeted the lower rate of alcoholism among Jews than among the general population. They have (sometimes dubiously) relied in various degrees on alleged favorable DNA and gene factors, as well as self-imposed shame and quiet ostracization to undercount the problem. In fact, our grandparents, both in the old country and once newly arrived in America, referenced the “shikker” (drunkard) in several “shprekhverter (proverbs). To wit: “When a shikker takes a drink, he becomes another person, and that other person also wants a drink.” “There’s no such thing as no illegal money for a wheeler-dealer, no honorable woman for a lecher, and no bad liquor for a drunkard.” “A tavern won’t corrupt a good man, and a synagogue can’t reform a bad one.”

In recent years, the surge of interest in both scotch and bourbon has been well-received by the Jewish community. “Kiddush clubs” have abounded – hard liquors are now regularly served after schul meetings and prayer. Several rabbinical organizations have stepped forward to warn that joy in worship is good, but excess in alcohol consumption to enhance that uplift is not to be tolerated.

Again, our attitudes toward temperance come into play. A BJV reader of the first installment of this story (and a member of Alcoholics Anonymous) wrote to inform me that alcoholism is a very real problem in the Jewish community, too. He added that several members of the organized Berkshire Jewish community have benefited from recovery programs. The reader feared that my earlier article seemed to wrongly state that there was no alcohol abuse problem among Jews. Such was not my intent or assertion.

The late Rabbi Abraham Twerski, an expert in the field of Jewish alcoholism and drug addiction, points out that Jews tend to be more secretive about emotional disturbances within their families and often avoid seeking help for fear of exposure and shame “that their private nightmares would be known to others.” In the face of Jews’ general acceptance into American society (with its country clubs, upscale bars, and kiddush clubs), Rabbi Twerski seems correct that admonishment from the rabbi – assuming that you would consult one – carries little weight for many of us. In an article published by the My Jewish Learning website, Rabbi Twerski dispelled myths about Jews and alcoholism and challenged the idea that Alcoholics Anonymous is only suitable for Christians. “It may be convenient to adhere to the myth that Jews cannot be alcoholics,” he wrote, “but this denial constitutes a serious dereliction of duty.”

Kashrut Issues – Past and Present

With the explosion of craft spirit distillers and the (over?) consumption of alcoholic beverages by Jewish imbibers at events held at our houses of worship, questions of kashrut have been revisited by the rabbinical community. Initially, religious leaders addressed kashrut issues in detail in the 15th and 16th century enlightenment period. The Shulkhan Arukh, our code of law written by Rabbi Joseph Karo, details the concept of bitul b’shishim (literally ‘nullification by sixty’). If a small amount of forbidden food inadvertently mixes with a permitted one (such as dairy in a meat dish), the dish is still kosher provided that the prohibited item is only 1/60th  or less of the total. For example, if a drop of dairy cream falls into your kosher cholent, the cholent will remain kosher.

However, wine loses its status as wine only after bitul b’sheish – nullification of its kashrut by one-sixth [1/6th] mixing. In other words, special kashrut laws for wines no longer apply to a liquid if a non-kosher wine makes up 1/6th or less of the otherwise kosher drink. The issue of kashrut does not arise with whiskys, which are by themselves most likely kosher. But what if the kosher whiskys were aged in barrels that previously held unkosher wine? There is certainly some contact between the residue of the unkosher wine and the otherwise kosher whisky. Which rules apply to spirits – the laws of kashrut for wine (1/6th) or the laws for comestibles (1/60th)?

So, with the steady rise of alcohol consumption by American Jews in the 20th century, these 16th-century laws were revisited. In the mid-20th century, most rabbinical authorities, including Rabbi Moshe Feinstein, postured that questionable whisky fell into the more liberal category of wine, which means it is possibly, but not definitely, permissible to drink whiskys aged in “unkosher” barrels. Simply put, the rabbis started with the assumption that whisky from a distillery is kosher and if it ages in barrels that originally held unkosher wine, since the unkosher wine makes up less than one-sixth of the final product, the whisky is kosher.

That standard held until the recent proliferation of distillers, distilling methods, and kiddush clubs. Our rabbis (oy vey) are again revisiting the kashrut issues. One element in the religious community raises the issue that knowing a consumer is drinking a product that has a trace of unkosher wine, no matter how small, is a shandeh (shameful) and not be tolerated. Others raise the issue that no matter how small the ratio of the unkosher wine, the whisky takes on the taste of the wine or port or cherry. And so on and so forth…. (Generally, the Vad Harabbim of the United Kingdom and individual Conservative synagogues have been more liberal in their interpretation of what’s kosher, while North American Vad Harabbim advise a more cautious approach to what’s kosher. For those who have a serious concern, the Chicago Rabbinical Council publishes a comprehensive list on the internet that addresses its kashrut opinion on hundreds of alcoholic beverages.)

And, as to the future? Recently, several distilleries in Israel, including Golani Distillery, Yerushalmi Distillery, and Milk and Honey Distillery began to export their whiskys outside the Holy Land. The expected growth of these new industries in Israel will have both a favorable impact on Israel’s economy and may also raise questions for kashrut guidance.  And, of course, another question remains: Can we continue to enjoy a good thing in moderation?

For additional reading, see Glenn Dynner, “Yankel’s Tavern – Jews, Liquor & Life in the Kingdom of Poland” and Marni Davis, “Jews and Booze – Becoming American in the Age of Prohibition.” Check, inter alia, on the internet: Sherry Casks, A Halakhic Perspective, Rabbi Akiva Niehaus;  myjewishlearning.com for “The Forgotten History of Jews in the Alcohol Business”; thedailybeast.com for “The Jews Who Made American Whisky.”