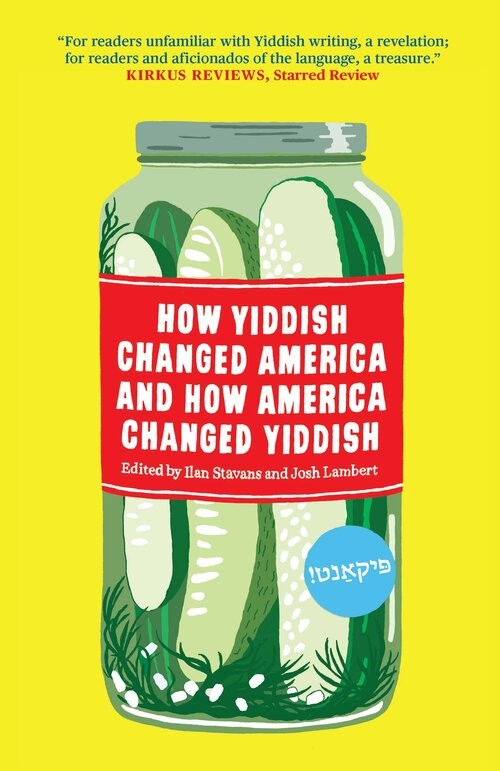 Of special interest to our community is a new anthology titled How Yiddish Changed America And How America Changed Yiddish, edited by Ilan Stavans and Josh Lambert in affiliation with the Yiddish Book Center in Amherst. It’s a monumental effort, 63 diverse entries in five separate but intertwining sections. The editors present essays, articles, excerpts of Yiddish plays and stories, poems, and cartoons, all in English with occasional transliteration from Yiddish.

The editors present a new and different picture of Yiddish that is true to its history as the language of the Jewish culture of Eastern Europe, transported to the United States and remolded by the immigrants, their children, and the radically-different American environment. In unbiased tones over a mere 400 pages, the anthology attempts to tell the stories of these Yiddish redders (speakers) and their offspring. The result introduces the Yiddish-speaking culture the editors call “radical, dangerous, and sexy, if also sweet, generous and full of life.” If this effort is not wholly successful, the fault does not lie with the editors; instead, it is the undertaking of a humongous task that perhaps could not be covered even in an encyclopedia.

The book seems intended for an audience whose own life, memories, acts, and yikhes (family background, pedigree) over the last three to five generations might have a connection to the contents of the anthology. I believe a reader’s own experiences, remembrances, and contact with Yiddish and the current existing Yiddish culture, as well as the thickness of his or her own vortslen (roots), will determine their enjoyment and interpretation of the material.

A brief summary of my vortslen: I am the oldest child of socialist Zionists from Piotrkow Trybunalski, Poland, a provincial capital near Lodz. They already were breaking from their religious upbringing before the war almost consumed them. Miraculously, they survived Auschwitz and Bergen-Belsen and left Europe to make a new life in Canada. When I grew up in Montreal, Yiddish was the first and only language at home, and I managed to graduate from the Yiddish day school, I.L. Peretz Shuleh, even though playing hockey after school was more important than redden, laynen, Grammatik und geshikhteh (speaking, reading, grammar, and history). After we moved to Brooklyn, my Yiddish slowly began to fade.

As my Yiddish continued to diminish, I did make some half-hearted effort to hang on to my first language. In college, I wrote a major paper on the Forverts, at one time the fifth-largest daily newspaper in New York City. But during my interview, I managed to insult Simon Weber, editor of the paper, by insinuating that he was the editor of a newspaper printing in a dying language. Later, to soften my guilt, I subscribed to the Forverts, and to this very day, I occasionally try to plod my way through articles. In recent years, I’ve lectured on Yiddish culture and language at the community college and synagogues, another form of catharsis for my own squandered opportunities to be a part of the true and I hope resurgent Yiddish community.

The editors of How Yiddish Changed America And How America Changed Yiddish identify potential readers as those who are casually familiar with Yiddish, those who still can speak (and possibly) read Yiddish, and those who are interested in the topic from a historical perspective. Within these overlapping groups will be readers who relate to Yiddish with nostalgia (essays such as  Ilan Shandler’s “O R*O*S*T*E*N, My R*O*S*T*E*N”; Matthew Goodman’s “Kosher Chinese”; and  Asya Vaisman Shulman’s  “On Bagels, Gefilte Fish and Chulent”).

Another group will be Yiddish redders, like me, who still believe that Yiddish has a viable future. For us, the anthology provides an abundance of historical background, observations, memories, and samples of Yiddish loshn (language). My own resolve to return more seriously to Yiddish was strengthened by a week spent at the annual  “Yiddishland” retreat in rural Dutchess County with ‘campers’ of all ages, including over a dozen Yiddish-speaking children. Since that unexpectedly transformational experience, a good part of my interaction with my three-year-old granddaughter has been in the mamehloshn.

The book can’t quite identify how a convergence might occur between the two most important streams of the current Yiddish world – one, the Haredi communities with their ever-growing number of speakers for whom Yiddish is the lingua franca used daily and colloquially, and two, the secular new Yiddish speakers who are products of Yiddish studies offered in universities, via the internet, and at summer camps and workshops like Yiddishland.

Among the Haredi Yiddish redders, grammar and introduction of additional English words to the Yiddish language are not as important as innovation might be to scholars of earlier Yiddish literature and the language’s history. To them, Yiddish is a living language used daily that, like all languages in current use, constantly evolves. One hurdle to the two streams meeting is that the Haredi community views Yiddish as its own private form of communication that helps keep the non-Haredi community on the outside – it’s an issue addressed by Jeffrey Shandler in his essay “Looking for Yiddish In Boro Park.” Another obstacle – one that might be surmounted – is that Yiddish literature in any form is only beginning to resurface. Some new writing is subject to Haredi religious restrictions, although there has also been a resurgence of secular Yiddish periodicals like the Yiddish League’s Afn Shvel, newsletters, and now even Yiddish books.

Theater, film, and television are major topics in How Yiddish Changed America – with an inevitable emphasis on Fiddler on the Roof, which was, of course, based on Yiddish stories penned by Sholem Aleichem. The anthology presents Cynthia Ozick’s excellent and informative essay, “Sholem Aleichem’s Revolution,” which packs in a lot of information about how Yiddish changed American and vice versa. First, she introduces us to the Yiddish language, making a comparison to Hebrew, and concluding that until the mid-19th century, “[Y]ou might tie your shoelaces with Yiddish, but Hebrew was the avenue of thought and certainly of civility.”

With the Jewish Enlightenment (Haskalah) in full bloom by the mid-19th century, many in Eastern Europe embraced Yiddish as a cultural tool for the masses. Ozick introduces us to Sholem Rabinovitsh, our Sholem Aleicheim, and reviews his personal background, as well as social and religious thought in Haskalah and Hasidism. Ozick, understanding that our interpretation of 19th century Ashkenazi roots is tinted by the Fiddler on the Roof, goes into great detail to introduce and explain the “real” Tevye who is the central character in eight stories written by Sholem Aleichem at the turn of the last century. Aleichem’s Tevye was more than a “simpleminded, peasant-like, naïve pre-modern character – the occasion of nostalgia for a sweeter time, pogroms notwithstanding.” Tevye, viewed through a late 20th century lens, seems to us an affable shtetl bumpkin, but Aleichem’s original Tevye was in fact a sober chronicler/witness of his society in transition. Tevye’s simple humor stands out today, but Aleichem’s protagonist (despite living in poverty and persecution) was more complex. When his beloved Golde passes away, he recites the prayer, “What are we and what is our life?”

Ozick ultimately points out that “the rush to Americanization, the immigrants, zealously setting out to shake off the village ways they brought with them, ended by encouraging amnesia of the central motifs and texts of their civilization.”

The tinted misinterpretation of Eastern Europe Yiddish life of some hundred-plus years ago is obliquely addressed in the book’s brief reference to I.L. Peretz’s famous short story “Bontshe Shvieg” (‘Bontshe the Silent’), first published just before the turn of the last century. Peretz’s stories, most of which are accessible in English, were and remain loved by many Yiddish readers both because of his expression of Jewish ideals and his respect for the majority of Ultra-Orthodox who practiced true piety.

In summary, Bontshe is a dirt-poor porter in a shtetl. Without friends, wife, or child, he lives a miserable existence without complaining his entire life. Upon dying, he arrives at the gates of heaven, where he must undergo a hearing to gain admittance. With tears in his eyes, his representative/angel recounts his pitiful life to the extent that the prosecutor/angel remains silent and turns away. Bontshe is now offered anything he wants. Anything! He ponders for a moment and quietly mumbles, “a roll with a little butter.” The audience in heaven is silent; his defendant/angel now turns away; and the prosecutor/angel laughs.

So what is the moral of this story? Today, when presented to an audience, discussion centers around humility, righteousness, and saintliness. Yet, to the reader in the shtetl living in fear of the next pogrom, and to the poor Jewish immigrant ghettos in America, and to the enlightened, the poor, the socialists, and the communists, the story is an obvious condemnation of society which leaves the victim totally disempowered to the extent he cannot even think of a just reward in the coming world.

To paint a truer picture of our parents’ and grandparents’ experience, the editors have included several essays, short stories and excerpts of plays dealing with the underbelly of the immigrants’ ghettos and life, including stories of suicide, incest, homosexuality, and prostitution, all facts of life in America that in the course of human nature we have chosen to forget. The editors present a translation of the second act of Sholem Asch’s God of Vengeance, which appeared on the Yiddish stage just after the turn of the last century and on the English stage in 1923. The plot revolves around a pious Jew who makes a living by running a house of prostitution below his abode, where he, his wife (a former prostitute), and their virtuous 17-year-old daughter live. The Jew tries to shield his daughter from the activities below their abode, but the daughter meets and falls in love with one of the prostitutes and may be induced to run off with other prostitutes and ply their trade. The play, which features the first known kiss on stage between people of the same sex, was raided by the police after opening night and several of the principals were arrested.

Both the strength and the weakness of How Yiddish Changed America and How America Changed Yiddish is its refusal to answer the question suggested by the title – how did Yiddish actually change America, and vice versa. In general terms, the editors reference the achievers who emerged from the culture of Yiddish speakers – the number of Jewish Nobel Prize winners, the notable political and social movement leaders, the movers and shakers of American life. Also noted are our immigrant parents’ contributions to science and literature, theater and movies, and commerce and industry (not to mention the occasional gonif and quack). Their Yiddish cultural background heavily influenced all of them.

The anthology challenges readers to interpret the numerous entries and relate and meld their own experiences and history to produce their responses to the question.  The editors may go a bit overboard when they note that, “Assimilation in the United States has indeed presented Yiddish with challenges, and it has responded impressively, dynamically, demonstrating its flexibility, complexity, and strength.” Given the strength and the thoughtful selection of the many articles, I give them the benefit of the doubt, and attribute this statement to a boundless optimism for Yiddish.