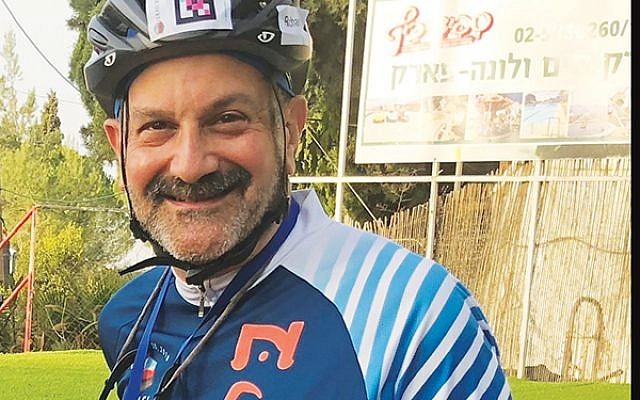 By Richard Slutzky / Special to the BJV

This past summer, I was installed as board chair by the board of directors of Hazon, a national Jewish environmental organization.

The primary focus of Hazon, “the Jewish lab for sustainability,” is to educate Jews of all ages to take action personally to reduce their carbon footprint, and by doing so, improve the environment for themselves, their families, and the rest of us.

Hazon educates through immersive experiences at various locations, including at Hazon’s Isabella Freedman Jewish Retreat Center in Falls Village, CT, as well as by training scores of environmentally knowledgeable Jews (through a program called JOFEE, an acronym for Jewish Outdoor Food, Farming, and Environmental Education) to disseminate useful information throughout the country through Federations, JCCs, day schools, synagogues, and other institutions. Hazon has also successfully created a Seal of Sustainability that is awarded to Jewish institutions that have undertaken environmentally sustainable initiatives, including using solar energy to partially power their activities, using recyclable materials instead of plastic plates and utensils for social activities such as an oneg Shabbat or meetings.

My wife Alyson and I moved up to Egremont as part-timers in 2011 (and permanently as of June 2019) as a respite from my job in the financial services industry in New York and Alyson’s therapy practice in Montclair, NJ. We were initially reluctant to have a second home for all of the obvious reasons, but in our mind, the Berkshires had it all – natural beauty, hiking and biking, great food, wonderful and kind people, great cultural attractions, and relative proximity to New York and Boston.

I grew up in Nebraska (yes, there are Jews there!) and recall when the first Earth Day was announced in April 1970. Earlier that February, Barry Commoner, the biologist and environmentalist (and future professor of mine at Washington University), was on the front cover of Time magazine. In that profile, he called attention to the many ways humans are contributing to the Earth’s despoliation.

That year in Hebrew school, my teacher used Al Vorspan’s Jewish Ethics and Social Values book to help us understand and formulate opinions on current international topics, including civil rights, civil liberties, the environment, and abortion. The issues surrounding the Jewish response to the environment continued to concern me, especially as we celebrated our holidays, many of which had agricultural roots. Back in the 1970s, national Jewish leadership was not focused on the environmental movement, and that perhaps was a missed opportunity to connect with environmentally-concerned Jews. During those same teenage years, U.S.Y. themes and messaging by my local Jewish Federation highlighted the importance of tikkun olam (repairing the world) and k’lal Yisrael (we are responsible for one another), as well as the critical importance of tzedakah.

In Nebraska, agriculture is highly industrialized and now the rivers near my home town are polluted with agricultural wastes, pesticides, herbicides, and high levels of nitrites. Michael Pollan, in bestselling books like the Omnivore’s Dilemma, traces many of the challenges we Americans must confront as a result of how our food economy has been built and how agriculture as currently structured contributes to global warming on a massive scale. Much can be done politically to legislate change to create more sustainable agribusiness solutions.

Hazon is a nonpartisan charity and does not lobby for legislative change. That said, part of Hazon’s role is to educate its participants on the scientific research regarding the interrelationships between agriculture and climate change so they can take their own actions in the political arena with ample information.

While it is a generalization, it seems as though Jews who reside in the Berkshires stay here in part because they enjoy the sublime beauty of the environment. They do not wish to see this area degraded by the pollution of our air, water, and land. Every day, as I travel through the area, I am still in awe of the power of the landscape and how lucky we are to live here.

Unfortunately, we are confronted by a looming climate crisis, the effects of which could be devastating here and around the world. We now have to figure out what we need to do and what steps, even incremental baby steps, we can take to reduce the overload on the environment. Jonathan Safran Foer, in his latest book, We Are the Weather, recommends eliminating the intake of meat during breakfast and lunch to reduce the demand for animal-based food, since animals are a large source of methane-based air pollution and consume huge amounts of farm resources that could be reallocated to grow food for humans. He also recommends reducing air travel where possible, driving less where possible, and in general being more sensitive to our actions and to recognize how they affect the planet.

At Hazon retreats, I have seen young Jews who are very secularized and uninvolved become turned on by learning how our tradition has interpreted our relationship with the environment. They have also become enthused about their Jewishness by recognizing that there is a growing community of like-minded Jews who care deeply about the environment and are concerned about the potentially cataclysmic damage caused by the climate crisis. As we envision what the Jewish community will look like in twenty years or more, I hope that Hazon can take significant responsibility for building a stronger, environmentally sensitive Jewish community in the Berkshires and beyond that takes the concept of repairing the world quite literally.

As I arise each morning in the Berkshires, I don’t have to think abstractly about the beautiful environment that I want to help preserve – it is all around me. It motivates and compels me to work hard on its behalf. A friend recently said, “Why focus on the Jews regarding global warming? We’re such a small population! “ But we have a legacy that is embedded throughout our texts that require us to act. We are also leaders in our communities and we can have ripple effects and make an impact. We must galvanize the Jewish communities across the country, each Jew, each Jewish institution, to recognize our role literally to repair the world. The future of the Jewish community and all future generations are relying upon us to do so. As Jonathan Safran Foer writes, “Is there anything more narcissistic than believing the choices you make affect everyone? Only one thing: believing the choices you make affect no one.”

For more information about Hazon, please visit its website, www.hazon.org. (Earth Day 2020 is on April 22.)