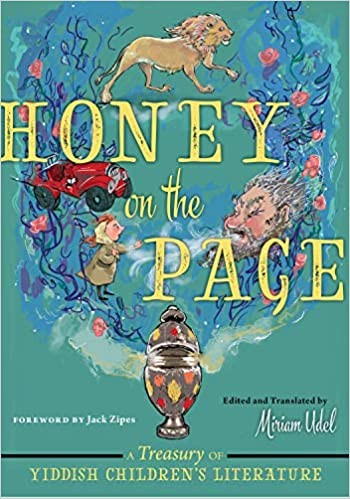 To read an excerpt, visit the BJV homepage and click the online version of the print newspaper. Honey on the Page can be purchased from your local bookstore, from NYU Press,  or through Amazon.

Honey on the Page is Miriam Udel’s new translation of Yiddish prose and verse for children written between 1900 and 1975, in the author’s words “an era in between a firmly implanted traditional religiosity and widespread assimilation.”

In her introduction, Udel – who is an associate professor of Yiddish Language, Literature, and Culture at Emory University’s Tam Institute of Jewish Studies – makes her case that these stories shed important light on Jewish culture, reflecting the ways authors and educators responded to social changes in Europe and later the United States and other countries where Jews resided. She writes: “The very essence of this literature was to affirm what Jewishness meant in a newly secularizing world.”

Udel combed hundreds of anthologies to find the fifty pieces in Honey on the Page – “a book for adults and children in proximity to one another,” she writes. “What I mean by that peculiar phrase is that as I have gone about the work of selection and translation, I’ve envisioned a child reading, with sympathetic and curious adults nearby.”

In an inspired turn of phrase that captures the humane spirit animating the work collected in Honey on Page, Udel writes: “Again and again, these stories illustrate the disruption posed by radical kindness.”

When did you first discover your interest in Yiddish literature, and when did you know that you wanted to pursue a career in academia studying it?

In 2001, I thought I might like to start graduate courses to better understand the relationship between secularization and literature, especially fiction. I wanted to understand how, in a largely secularized Western world, the novel became a site for thinking about moral reasoning and hashing out ethical dilemmas. I had a meeting with Professor Ruth Wisse, whom I knew slightly from my undergraduate career at Harvard, and she urged me to consider learning Yiddish and pursuing my inquiry in the realms of Jewish literature. She gave me a copy of Uriel Weinreich’s classic textbook College Yiddish and sent me on my way. As a speaker of English and Hebrew, I found the mameloshn intuitive and captivating. That summer, I began a course of intensive language study at YIVO, and in the fall, I began a degree in comparative literature, with Yiddish accounting for the lion’s share of my course work.

In your introduction, you write, “The very essence of this literature was to affirm what Jewishness meant in a newly secularizing world.” The stories were written between 1900 and 1975, transformative years for Jewish culture and identity – what are some of the continuities and discontinuities in how these authors express ‘what Jewishness means’?

To answer this excellent question fully would probably summon forth a book, or at least a long article, so I will confine myself to an example that illustrates what I mean. Take the Sabbath tales that I include as the first two selections in the anthology. Both were written by self-proclaimed leftists, a Zionist author (Yankev Fichmann) and a Bundist educational leader (Yankev Pat) respectively. Despite their overarching secularism, they wrote stories celebrating very robust, traditional Sabbath observance. Yet the meaning of Shabbos itself gains a new inflection: it’s a time for family togetherness, even if that value can only be honored in the breach, and a day when workers withhold their labor from their (capitalist) bosses. The trappings are very traditional, but the messages of these stories are very much in keeping with the values of the secular left.