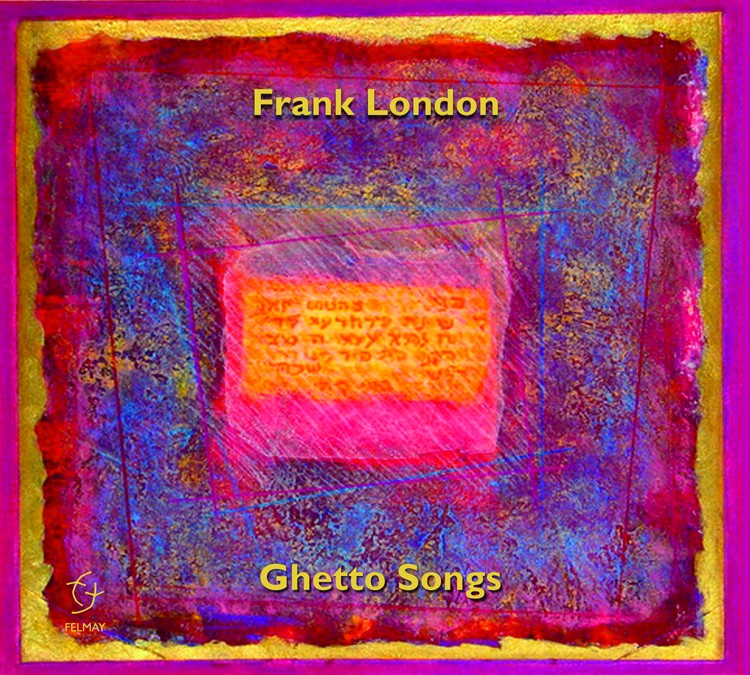 Call it a sign of the times – when the press release about trumpeter Frank London’s new record Ghetto Songs (Venice and Beyond) hit my inbox, I jumped to the conclusion that the co-founder of The Klezmatics had put together a project about the pandemic, a musical reflection about the circumscriptions that fear of COVID-19 has imposed upon our minds, bodies, and spirits.

Actually, London told me when we spoke in early April, the pandemic had “absolutely zero” to do with Ghetto Songs, a project with a global focus that germinated around five years ago, when the peripatetic bandleader had no inkling that his customarily breakneck globetrotting schedule would ever be curtailed.

In 2016, London was enlisted by Beit Venezia (an organization in Venice, Italy dedicated to promoting Jewish culture and thought in the city by forging cross-culture connections) to helm a musical project to commemorate the 500th anniversary of the establishment of the Venetian ghetto. The Jewish ghetto was sited by a rank copper foundry – in Italian, ‘geto.’ The name caught on to describe an enclosed part of a city to which an outsider group is confined, but also to capture a mentality that delineates a world inside the walls and the world outside them.

London moved the initial concept to the backburner while he collaborated with Beit Venezia in scoring a 2016 production of The Merchant of Venice, which was staged in the former ghetto’s main square, where some of the play’s action transpires. Two years ago, he revisited the ghetto songs idea for a music festival hosted by Germany’s Elbphilharmonie Hamburg, “the most prestigious and amazing arts center in Europe, I would argue,” he says. The crack ensemble of American and European musicians and singers he assembled performed again at a concert in Venice, and would have toured during the summer of 2020 but for the pandemic. London retreated to his home in downtown Manhattan, spending a year unprecedentedly off the road, cooking and eating big meals with his family and immersing himself in “the Film 101 class that I never got to take because I was studying music.”

Last September, London was contacted by Beit Venezia’s Shaul Bassi and informed that the organization had received funding that had to be spent before the end of the year – could he pull together a recording based on the ghetto songs idea? “I said, ‘You know I can,’” London remembers. “That’s always been my credo – give me a budget and a deadline, and we’re good to go.

“As my mentor, Ben Mandelson, used to say: ‘Forward in all directions!’”

The conceptual challenge London faced was how to winnow down an imposing amount of research into a musically coherent recording that fulfilled his vision of juxtaposing the “ghetto music” of 17th century Italian classical composers, 1970s American funkateers, township musicians of South Africa, Ashkenazi cantors of the early 1900s, Sephardic Jews from Morocco, and Eastern European klezmorim, along with his own compositions setting Italian poetry and Hebrew liturgy to music. London says he might have made his selections even more globally diverse but chose to center on Italy and Venice on this recording – and that there is more material he hopes to use to further explore this theme.

Often performing live before recording will clarify what works and what doesn’t. That couldn’t happen, although London says he learned from the two shows in Europe that an audience was able understand what the band was up to when it segued from Donny Hathaway’s 1970s soul classic “The Ghetto” into Jewish-Italian composer Solomone Rossi’s churchy 17th century take on the madrigal “O dolcezz’amarissime.”

Unlikely juxtapositions and unexpected contradictions are precisely what drive ‘ghetto’ music, contends London. “Ghetto borders are porous,” he says. “On the one hand, they limit the discourse between inside and outside – that’s what the whole point of the walls –  but on the other hand, especially in regard to things like music, people inside are aware of what’s happening outside, and outsiders are aware of what’s happening inside.”

Next, London had to assemble a band of US musicians capable of adapting to disparate musical styles – the Europeans who played alongside him in the original concerts were not available due to pandemic travel restrictions. These musicians had to express the music’s feeling and intention on instruments not necessarily associated with the original compositions.

In part because nobody was out on the road touring, London was able to enlist a stellar roster of studio musicians – modern Jazz guitar virtuoso Brandon Ross, percussionist Kenny Wollesen, cellist Marika Hughes, bassist Gregg August, and klezmer accordionist Ilya Shneyveys. “You know some people get very defensive when they’re put in a situation to which they’re not familiar,” London says. “All the musicians I have are so strong that they actually look forward to the challenge of trying to do something differently. They have to have incredible virtuosity and range.”

He adds: “Obviously we’re not trying to imitate any of these musics. We’re not trying to be an authentic cover band and do each [song] exactly according to the way it’s [usually] done. I think that’s what helps unify what otherwise could be a really disparate, all-over-the-map recording.”

As fine as the musicianship is on the recording, London says that Ghetto Songs is ultimately a showcase for great singing. “It often takes me a while to understand something that I’m doing, and I think that if I were to contextualize it now, I would say this is the idea of a 21st-century vocal recital, except with a common through theme, it’s really about the voice.”

Highlights on the album are the duets by Lebanese-American tenor Karim Sulayman (winner of the 2019 Best Classical Solo GRAMMY award) and Svetlana ‘Sveta’ Kundish, a versatile cantor steeped in Yiddish song, as well European classical, sacred, experimental, and folk music. They have fun with the traditional Judeo-Venetian “Tahi Taha,” set to jaunty music composed by London, and capture the North African feel of “Nirdi Nada Reiho,” a traditional Jewish Moroccan melody (with text by 17th century kabbalist, Rabbi Abraham Ibn Musa) that builds in intensity over eight hypnotic minutes. (Kundish’s contribution was the only overdubbed element of the record – she lives in Germany and could not travel to the United States due to the pandemic.)

London says his favorite song on the record is “La Barcheta,” a romantic song by Venezuelan-born Jewish composer Reynaldo Hahn, who worked in France. “I have to pull truth in advertising - It’s not specifically a ghetto song, but it is kind of a love song to Venice and it’s the most gorgeous song and my heart breaks every time I hear it.” Sulayman sings alone on this cut, complemented by a lovely cello solo by Marika Hughes.

Guitarist Brandon Ross does double duty as a singer on the cover of WAR’s smash 1972 hit “The World is a Ghetto.” It took me several listens to appreciate this track – the original (music of my childhood) is so seared in my memory. When I finally came around, I enjoyed the way London on trumpet and as bandleader sustains the song’s dreamy flow, over which Ross eventually lays down a scorching, rough-edged guitar solo that captures the original’s punctuations of anthemic urgency. (I was also intrigued when London told me: “I debated with myself long and hard, before the live concert especially. about whether to include Elvis’s ‘In the Ghetto.’ It was really a tough call when we finally decided not to.” That has to be the ultimate ghetto outsider song – someday, I hope to hear London and crew have a crack at it.)

My favorite song on the recording is “Retsey,” a version of the Amidah prayer from the repertoire of the great Polish cantor Gershon Sirota, who was murdered in the Warsaw Ghetto uprising. Performed by the acclaimed chazzan Yaakov “Yanky” Lemmer, it is emotional, but not kishka-wrenching emotional in the way some cantorial music can get. Really, it’s a duet between Lemmer’s voice and London’s trumpet – their eschewal of bombast helped me connect to the passion and the spiritual devotion at the heart of the song.

The album closes with a lush version of the Chanukah standard “Maoz Tsur” set to music by Benedetto Marcello, which congregants apparently still sing in Italian synagogues. (London says he also has access to copious field recordings of Venetian Jewish music that influenced his work on this project.) Performed by Kundish and Sulayman, it’s nothing like the jaunty, folky tune most of us are familiar with and, London explains, perfectly illustrates the outsider/insider dimension of ghetto music.

In contrast to composer Solomone Rossi, a Venetian Jew whose music sounds like the church music of his day, London explains: “Marcelo is not Jewish; he is Christian. He is a music geek –  you know, just like some people who transcribe every Charlie Parker solo ever played. Marcello is obsessed with the Jewish music that’s coming out of the ghetto in Italy and he goes to the synagogue and in the synagogue, he transcribes the Jewish melodies. And so it’s from Marcello the Christian we actually hear the sound of what Jewish music was like in the 16th and 17th centuries. So I love that that seeming paradox – which is not really a paradox, but actually very human and normal. But it appears that way when you tell people, ‘Yeah, the Jewish guy is doing the not-Jewish music, and the non-Jewish guy is the one writing the Jewish stuff.

“You know, welcome to the world. You want things to be simple? No, they’re not. They’re beautiful.”

Ghetto Songs (Felmay Records) is available on all streaming platforms and a CD version can be purchased online retailers. Frank London will perform this summer at the Yiddish Book Center's virtual Yidstock 2021.