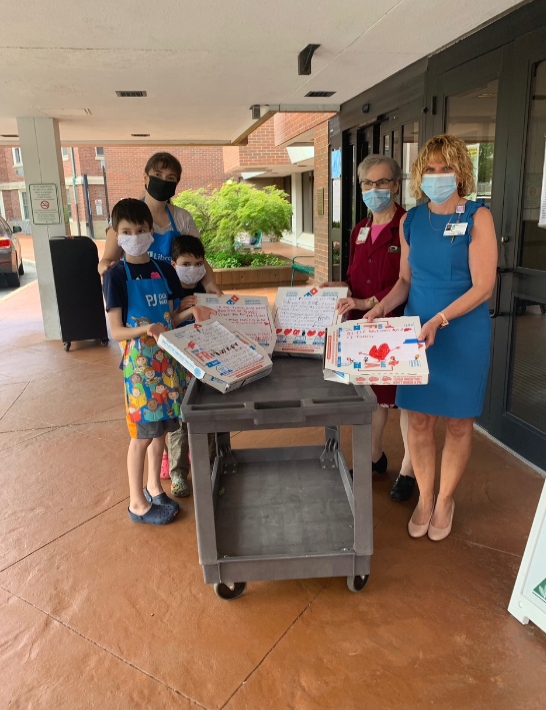 When my family was asked to chair Super Tzedakah Week, we were honored and grateful for the opportunity to give something back to the community that has given so much to us. When we told our sons – 10-year-old Lev and 8-year-old Sasha – about it, they were excited because they figured Super Tzedakah Week must have something to do with superheroes and, in a way, it does, except we’re not the heroes in this story – you are.

We explained to the boys that Federation needs our help to raise $1,000,000 so that it can continue to help our family and others. Sasha’s reaction was, “Whoa! A million dollars?! That’s a shi-beep load of money!” That is how he actually says it to circumvent our no-cursing rule. Lev’s reaction was, “This is gonna look awesome on my college application!” And that pretty much sums up our kids.

Despite those different reactions, when we asked the boys what words come to mind when they think about Federation, they both had the same response - “Old Jews.” After we stopped laughing, we thought about it and realized that they were actually articulating a profound – albeit inaccurate – a perception that many adults may share as well.

In the boys’ case, we could easily understand where that impression came from since, before the pandemic, their most visible interaction with Federation was as volunteer card-makers and senior holiday package delivery boys. In that capacity – depending on the holiday – they personally handed out bags stuffed with challah, apples, honey, hamentaschen, matzah, and more to the grateful Jewish residents of Devonshire Estates, a senior living community in Lenox. They also accompanied me one Friday a month to lead Kabbalat Shabbat blessings over the candles, wine, and challah.

Given all of that, the boys’ description made perfect sense. As children, they focus on what they see; then again, don’t we all? However, there is so much that Federation does – even for them – that goes unseen and taken for granted by them and, perhaps, by you too.

President George H.W. Bush, who is not someone we often quote, coined the phrase “a thousand points of light,” which seems like an apt phrase to describe the task at hand of making the unseen seen. We don’t have the room to highlight a thousand points here, so we will focus the spotlight on just a few of the things Federation has done – and continues to do – for our family, for yours, for the community in which we are blessed to live, and for the broader Jewish and secular world beyond.

One of the most important things the boys failed to see is that without Federation – that is, you – they, and so many other kids in our community, would not be able to attend Jewish day and sleepaway camp, which our boys will do together this summer at Camp Eisner for the very first time. The boys also failed to see that without Federation – and you – they would not receive a wonderful Jewish-themed PJ Library book each month as they have every month since before they could read. So much for Federation just being about “Old” Jews.

As many of you may know, PJ Library is a program of the Harold Grinspoon Foundation, where Natasha works as a nonprofit consultant, mentor, and director of their Leadership Engagement & Advancement Program (LEAP). A big part of her job is helping other Jewish organizations raise money, so chairing Super Tzedakah Week is nothing new for her. It wasn’t always that way, though.

Natasha grew up in Kiev, Ukraine in the Former Soviet Union, where an organization like Federation was illegal. She had no Jewish community growing up so, as the Soviet Union started to crumble in the late 1980s and early 1990s, she helped create one by becoming a co-founder of Congregation Ha Tikvah (The Hope) in Kiev. After getting her M.B.A., she served as the finance director for the American Jewish Joint Distribution Committee for all of Ukraine.

My experience growing up was the exact opposite. As the son of a rabbi, I took my connection to the Jewish people for granted, so much so that I made Aliyah to Israel – another recipient of Federation’s support – where I served in the IDF as an 81 mm. Mortar Specialist.

From these very different backgrounds, but with the same commitment to the centrality of building and maintaining a Jewish community, Natasha and I met at a Jewish summer camp in Western Ukraine, and here we are.

We moved to the Berkshires in 2004, where Natasha worked as the first executive director at Knesset Israel in Pittsfield. In addition to my being a writer and documentary film producer, I am a personal trainer and taught phys-ed at Sinai Academy, the local Hebrew day school that shut down in 2011. Soon after that, I began teaching at Hevreh’s Religious School, where I still teach and tutor fourth-graders through bar and bat mitzvah students. I also co-chaired the Berkshires Jewish Festival of Books at Hevreh, which was co-sponsored by none other than Federation. That is, of course, not unique to Hevreh.

You would be hard-pressed to find a Jewish-themed program in the Berkshires that doesn’t have Federation’s loving fingerprints all over it and financial support behind it. All you have to do is glance at the vast array of offerings in the pages of this very newspaper, the Berkshire Jewish Voice, or Federation’s annual Berkshire Jewish Summer guide (which will not be published this year due to the pandemic). Everything you see there is supported by Federation in some way, by donors like you and us giving as meaningfully as we can.

Speaking for our family, these two publications curate our Jewish year, as we are sure they do for many of you too. Of course, not everything is for us, but knowing there is something for everyone speaks to the breadth and depth of Federation’s impact on our lives as Jews – old, young, and in between. However, that impact goes far beyond just Jews and, in the middle of a pandemic, it is more important than ever.

At the height of the summer surge, the boys became Federation delivery boys once again – this time of pizzas to the Mother-Baby Unit at Berkshire Medical Center, where they were born. This was Federation’s way of letting our health care workers know how much we appreciate them and all they have done for us during this unbelievably tragic and difficult year, and we felt truly privileged to be the ones chosen to deliver that message, which was cheesy in the best possible way.

Super Tzedakah Week is also promoting a Dignity Drive to combat feminine hygiene and incontinence poverty. You can bring dignity to a neighbor in need by dropping off new packaged menstrual and incontinence products at locations throughout the Berkshires from May 1 through May 28, which will then be distributed to local food banks and social service organizations. So much for the boys’ assertion that Federation is just for Jews.

There are countless other examples of Federation’s work to help those in need in Berkshire County, around the country - like victims of the recent Houston winter storm blackouts - and around the world. However, what these countless examples all have in common is Federation’s ability to count on you as much as you count on it.

So, whether you’re an older Jew, a young Jew, or somewhere in between, we hope you’ll join us in giving of yourself and giving to Federation. And, for Sasha’s and Lev’s sakes – and all of yours as well – please be a superhero and please give a shi-beep load!