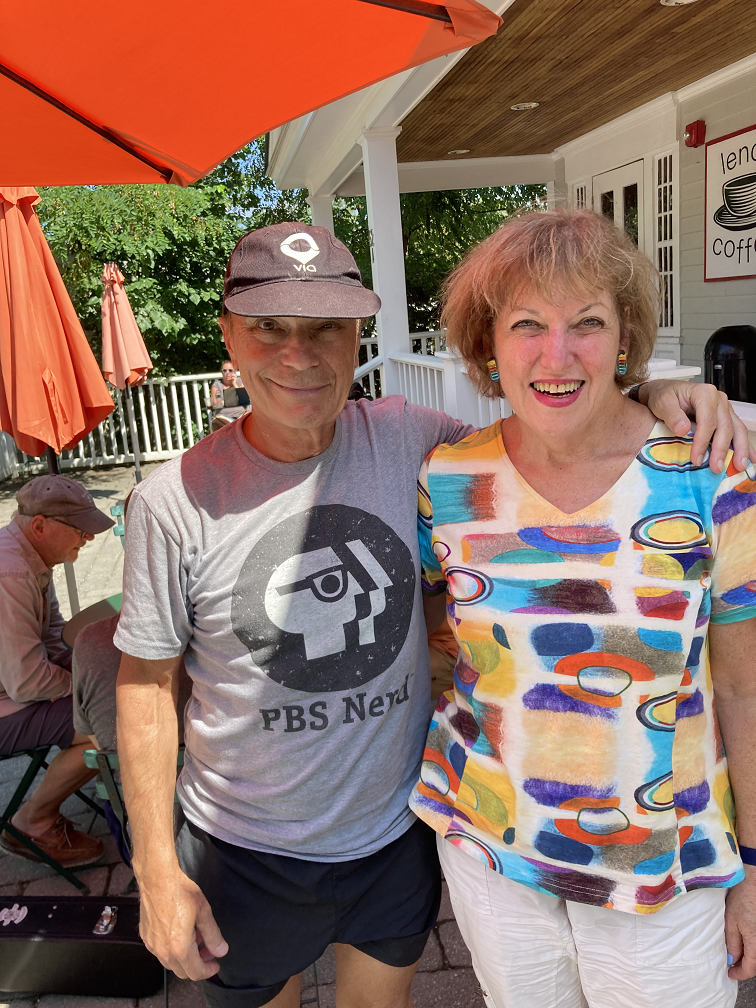 A surprising encounter in ten parts

By Ruth Kaplan / Special to the BJV

In August, my husband Toby and I traveled to Lenox for the glorious experience of hearing conductor Michael Tilson Thomas and the Tanglewood Festival Chorus performing Beethoven’s 9th Symphony. Life doesn’t get much better than that. Our elder daughter had just gotten married the week before, so we needed a respite after spending much of the summer in semi-hibernation due to pre-wedding Covid concerns. It was a joy to travel with dear friends to the Berkshires, even for a short stay.

A few weeks earlier, I had the opportunity to speak with Berkshire Jewish Voice editor Albert Stern to pick his brain about the universe of Jewish publishing. I had come to know Albert in my past role as Director of Community Relations at the Israeli Consulate in Boston. I have also published dozens of personal essays and articles, primarily in the online magazine JewishBoston, two of which (stories about Team Israel in the 2021 Summer Olympics and my new grandson’s unconventional bris) Albert reprinted in the BJV.

I told Albert I might be in Lenox in August and he kindly invited me to meet for coffee, schedule permitting.

Although my husband and I only planned a two-day stay in Lenox, I really did want to meet Albert, so I reached out to set up a tentative meeting. As I’m sure you can appreciate, when on vacation — even a short one — stuff happens. Our meeting place was set: Lenox Coffee. But the precise time was a little unsettled. Albert asked me to text him in advance. As it happened I only had one “Albert “ in my contacts, which I naturally assumed to be Albert Stern. I texted him my ETA, only to learn subsequently that I had texted the wrong Albert!

My husband and I approached Lenox Coffee by car and passed a table occupied by a man sitting alone. “That must be Albert,” I said. “Wow, he looks really different from what I imagined!”

“Isn’t that always the case?” my husband commented. So we approached the man and I asked if he was Albert. “No, sorry,” he replied. So I was right, after all. He didn’t look like the real Albert!

A few minutes went by and a slightly older gentleman got out of his car. He was wearing a t-shirt with the logo: “PBS Nerd.” Obviously, this had to be Albert the journalist.

So I strode up to him and said (with confidence), “Excuse me, but are you, Albert, by any chance?”

To my surprise, he said he was sorry, but he wasn’t Albert. At this point, I decided I was through with approaching unidentified men and would just wait patiently. Within a minute or two I received a phone call from the real Albert apologizing that he had to attend to an urgent matter and that, not having received a text from me (remember, I wrote to the wrong Albert?), he was uncertain as to whether our appointment was still happening.

Naturally, I was disappointed, but c’est la vie. These things happen. I asked my husband if he’d get me an iced coffee so we could just hang out for a bit. Just as he went inside the cafe, along came the “PBS Nerd” gentleman holding a cup of coffee and a scone. And this is when my luck changed big time!

He turned to me and inquired, “So did Albert show up yet?” I responded that unfortunately, Albert was not able to make it after all, to which he replied, “Baruch HaShem.” Now when you think about it, that expression (which means “praised be God”) didn’t exactly make sense under the circumstances, but no matter. Why did he say “Baruch HaShem” to me? Am I so obviously Jewish?

I was taken aback — in a good way — and asked him how he knew Hebrew. He introduced himself as Steve Kerner, owner of a home in Stockbridge. He said that he was self-taught in biblical Hebrew and that he could recite the whole first paragraph of Genesis 1:1 in Hebrew, to which I replied: “So can I!” I learned the paragraph in Hebrew school. We proceeded to declaim that paragraph in Hebrew in unison describing the first day of creation!

When Toby emerged with my coffee moments later, I was excited to share with him the amazing fact that Steve and I had just recited the first paragraph of Genesis together in Hebrew, at which point Toby invited him to have a seat and join us.

Steve shared his amazing life story — or should I say stories. He served in the Peace Corps post-college, traveled extensively in South America, and is fluent in Spanish. In fact, several years ago his late wife encouraged him to polish his underused Spanish and he became proficient as a Spanish writer and teacher. He is adept at languages and also speaks some Hebrew and French. When I inquired as to whether he’d ever been to Israel, he was sorry to report he had not. When I told him “that was not okay,” he agreed and sought my advice on the best way for him to go.

So if it was the “PBS Nerd” t-shirt that hinted at his possibly being Albert, I had also noticed his baseball cap, which was labeled “Via.” Now those letters could have stood for anything, but I wondered whether it represented the Israeli-founded car sharing service in New York City. It did. Toby and I knew the general manager of Via’s New York office, Omer Granot, and, to our astonishment, Steve knew him, too. I first met Omer about eight years ago when he was an MBA candidate at the MIT Sloan School. A friend of mine and I “adopted” him at the request of his Israeli brother, who we met the prior spring as part of an IDF military mission. Omer became our liaison to the whole cohort of MIT Sloan Israelis and thus we began our volunteer hosting program “Benenu” which continues to this day. The point is, I know Omer (and his wife and family) well. But how had Steve met Omer?

Steve had been very devoted to his late wife, a victim of breast cancer who died six years ago. In her final bout with the disease, she spent over three months at Memorial Sloan Kettering Hospital in New York. Steve was by her side every day, commuting from his home. He found it to be financially burdensome to take taxis back and forth, but taking the city bus was too slow and tiring. Someone told him about Via, a shared taxi service very similar to the Israeli “sherut” concept. The beauty of Via was you never paid more than $5 per ride. Steve found the service to be totally reliable and pleasant, and he even managed to practice his Spanish with their friendly drivers, who usually lent a sympathetic ear to his challenging 10-hour daily hospital visits. In this very dark period of his life, the Via service helped Steve immensely.

Less than a month after Steve lost his wife, he received an email from Via asking loyal customers to share any engaging stories regarding their Via use. For example, some riders had found soulmates, while others had secured jobs. At the time, Steve was sleeping a lot and barely speaking with anyone, still trying to cope with his profound loss. Because Via occupied such a special place in his heart, he roused himself and replied to the email, submitting his story as to how comforting Via had been to him during his wife’s terminal illness.

The next day, Steve received another email from Via thanking him for his story and expressing sincere condolences over the loss of his wife. The company also asked him for his home address, as they said they had something they wanted to ship him to express their sympathy and gratitude. On the following day, his doorbell rang and Steve was met with an immense bouquet of flowers (and a Via hat and two t-shirts ), along with a huge condolence card signed by all twenty Via staff members. He was moved to tears.

About sixteen months after the flower delivery, Steve found himself in the front seat of a Via car again. In the back seat sat an Israeli couple conversing in Hebrew. Steve chatted and found out that the man worked for Via. Steve recounted the story of the condolence gestures, at which point the Israeli man proclaimed: “I’m Omer. I am the general manager of Via and was the first one to read the email about your wife.” Omer added that each time the company had off-site meetings, he started by reading Steve’s email and saying to staff: “This is why we are in business!”

This tale should have ended in part eight, but there’s just a bit more than the coincidence of Steve’s meeting Omer and his wife in a Via ride share. As it happens, Memorial Sloan Kettering Hospital solicits stories each year from loved ones of patients and stages the best ones at an annual gathering of about six hundred people. So Steve wrote up his story and submitted it. Not surprisingly, it was one of the winning entries. As a result, his inspiring narrative was one of several performed by Broadway(!) actors at this annual gathering.

Following our magical encounter with Steve, I reconnected with Omer Granot, who is now back in Israel. Of course, he remembered Steve, who he only actually met that one time in the Via car! I also wrote Albert to express my disappointment that we were unable to meet. I did also note that as a result, my husband and I met a very special Jewish man from Lenox with a remarkable story. Albert then asked me if I had met Michael. “Who is Michael?” I asked.

So perhaps there’s more for another adventure in Lenox. I still hope to meet Albert and am fairly certain it will happen one day.

Ruth Kaplan is the past director of community relations at the Consulate General of Israel to New England. She is the former director of the CJP Boston-Haifa Connection and supervisor of the young Israeli ambassadors’ program called “Shinshinim.” A nearly lifelong resident of Brookline, Ruth has had careers in law and public education advocacy and is passionate about creating people-to-people connections among Israelis and Americans.