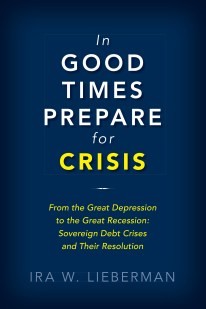 This Jewish Federation of the Berkshires program will take place at Hevreh of Southern Berkshire, and will be followed by a catered lunch. Prepaid lunch reservations required in advance. Email federation@jewishberkshires.org, or call (413) 442-4360, ext. 10, to RSVP.

Ira Lieberman worked for the World Bank from 1994 to 2003, helping resolve financial crises in Mexico, East Asia (primarily Korea), Turkey, and Argentina. He worked with the Troika—the European Central Bank, the European Commission, and the IMF—on crisis resolution in Portugal in 2013 and in Portugal and Spain on crisis resolution in 2015. He also worked on the initial pro-market economic reforms in Russia from 1992 to 1995. Based in the Washington, DC area, Lieberman and his wife, Phyllis, have a home in Stockbridge.

Lieberman’s book, In Good Times Prepare for Crisis, is a sweeping historical analysis of the reasons why nations, in good times, don’t really do enough to prepare for the next crisis. It also explores the consequences of the economic unrest this inaction ultimately visits upon financial markets and the general population. A lack of memory about, or an incomplete understanding of, a previous financial debt crisis will lead policymakers to ignore the signs of impending crises, writes Lieberman. A failure to adequately apply the lessons learned in the aftermath of these upheavals creates a vicious cycle in which yesterday’s unresolved crisis plants the seeds for tomorrow’s economic calamity.

What’s more, given today’s interdependent global financial marketplace, one nation’s financial or sovereign debt crisis might quickly morph into a regional or worldwide emergency, in the manner of the 2008 recession that rocked advanced economies in North America, Europe, and Asia.

Per the book’s subtitle, “From the Great Depression to the Great Recession: Sovereign Debt Crises and Their Resolution,” Lieberman provides a long view of how financial crises occur and inevitably recur. Put in the simplest possible terms, a sovereign debt crisis occurs when a debtor nation has borrowed more money from a creditor nation that it can repay. At the end of World War II, economically-advanced nations put into place a monetary order designed to mitigate the economic and political consequences of financial upheaval, its success hinging on the ability of “lenders of last resort” such as national banks and multilateral financial institutions to prevent a crisis from spiraling into catastrophe. In Good Times Prepare for Crisis explains how this international monetary order came to be and continues to operate.

While a book of this scope may seem daunting to the general reader, Lieberman writes in clear, jargon-free prose about economics, and logically connects the historical dots among the financial crises to illuminate monetary policy in the 20th and 21st centuries. Having held high-level positions at the World Bank, Lieberman has worked with governments, corporations, banks, and financiers (including George Soros), and shares his first-hand experience of how recent crises have been handled.

At the November 8 Knosh & Knowledge, Lieberman says he will draw on his experience as an economist and historian to explain how financial crises arise, why the early 21st century has been so economically volatile, and what the future might hold. In September, he spoke to the BJV’s Albert Stern; this is an edited version of their conversation.

A high-level question – what is a sovereign debt crisis?

The crises I’ll be talking about through historical periods, all of them more or less went into sovereign debt crises. But they could have started as a stock market crash or real estate crash or a financial crisis with banks getting in trouble. So crises can manifest themselves in many ways. A sovereign debt crisis is when a country becomes so highly indebted that it really can’t finance its basic needs. It can’t finance its budget or pay for public goods - that can be education, that can be food subsidies, that can be health care, that can be lots of important things.

So when we talk about a sovereign debt crisis, we talk about a country being highly indebted, and usually the reason it becomes a crisis is they owe that money not in their own currency but in a foreign exchange. [The borrowing] is usually tied to trade, but often borrowing becomes short-term in nature. When short-term debt not tied to trade accumulates, often that's tied to waste and very often linked to corruption, so countries that have been known to be corrupt and have borrowed abroad then begin to run out of foreign exchange. They can’t pay their external debts and they get into what's known as a sovereign debt crisis.

Can you explain the role of a “lender of last resort”?

In the 19th century, the English economist Walter Bagehot came out with his famous work on the role of the lender of last resort. His view was that a country's central bank should be in a position to save the financial system by following certain basic rules; and so the first concept of a lender of last resort was that of a national central bank in an economy. That was the role that the US Federal Reserve played together with the US Department of Treasury and Federal Deposit Insurance Corporation in the recent crisis. The three of them got together and they collectively became the lender of last resort to the US banking system, and the non-bank financial system –  for example, entities like General Motors Acceptance Corporation (GMAC) and the investment banks Lehman Brothers and Goldman Sachs. They all had to lean on [a lender of last resort] to bail them out.

As the global economy expanded, it became clear that many countries did not have a central bank that was sufficiently robust or strong enough to deal with the kind of bad debts incurred. So then there comes the need for what we know as an international lender of last resort. For emerging market countries, it's become the International Monetary Fund (IMF), supported by the World Bank, and regional development banks like the Asian Development Bank or the Inter-American Development Bank. For the Euro Zone countries, the European Central Bank might have been able to play that role on its own, except the Germans and other countries in the region did not want it to go on their own to bail out what they call the weaker countries in the region. So the European Central Bank developed this troika with the IMF and then the European Commission to become became the lender of last resort.

You quote several noted economists about the root causes of the US financial crisis of 2008. Joseph Stiglitz wrote: “The crisis has made it clear that self-regulation [by the financial industry] doesn’t work.” Nouriel Roubini observed: “In the end the significance of government action was dwarfed by the significance of government inaction.” Henry Paulson’s view is that “we were living beyond our means – on borrowed money and on borrowed time.” Timothy Geithner wrote: “The fundamental causes of this crisis…began with a mania – the widespread belief that devastating financial crises were a thing of the past.” And finally, Alan Blinder, who wrote: “The US financial system...had grown too complex and far too fragile for its own good – and had too little regulation for the public good.” What is your take on it?

All of the above. When I give my presentation, I’ll share little chart which shows that each of the historical crises started with a bust of a mania of some kind, like the famous 1929 stock market crash. In this case the speculation was in real estate, much of it is associated with soft money in the economy at very low cost for a long time. That [kind of debt] accumulates very quickly. But the regulatory issues are the ones that shocked me – and it's still a big problem in this country - because much of the accumulated debt was not in the conventional banking system. All the conventional banks had their problems, as well, but it was investment banks and other non-bank financial institutions and the government-backed institutions Fannie Mae and Freddie Mac that had very little equity. Leverage was an enormous problem and no one was regulating the investment banks except the Federal Trade Commission, but that was more on the corporate side, not on financial leverage or financing. Some of the biggest banks went “regulatory shopping” and lobbied their way into getting their own regulator. At one point of crisis [Fannie Mae and Freddie Mac] represented 50 percent of mortgage financing in the country…and they had their own regulators.

When I read your conclusions you seem to imply that the lessons of the last financial crisis have not really taken root in the culture of the financial industry. What do you see happening in the future if crises are not resolved in a meaningful way?

The Dodd-Frank Act did a lot to strengthen the banking system - not everything, but a lot. Some of the basic tools to resolve crises were either taken away or not provided, however. So the strengthening was forcing the banks to increase their capital base, which they're constantly fighting because increasing capital means less return on equity. So they're constantly fighting because they want to give more to shareholders, but it also means that the guys who run these institutions, who earn most of their compensation on return on capital, don't get the same very large paychecks. Greed knows no boundaries.

Another weakness is the Federal Reserve is no longer able to do a banking bailout without coming to Congress. The Treasury is precluded from using an emergency fund for bailouts, so the whole concept of the bailouts would imply going to Congress. Now, can you imagine going to this Congress in time of extreme crisis and getting consensus from the Congress. Many of the economists I know say this is at the crux of our problem now – we don't believe the political system is such that we could do what we did during the Bush and Obama years. Leading up to Obama's election, they had to deal with McCain and Obama, who were running for office - but those guys agreed to play ball and not politicize the crisis or the solution. Can you imagine Trump not politicizing it?

So I don't think we have the will, I don't think we have the leadership, and, by the way, the central bank is still overloaded. Its balance sheet is very indebted because of quantitative easing – the soft money that was given to the banking system in terms of long-term bonds in order to keep interest rates from rising dramatically. So while we have a low growth/low inflation situation, we have a high debt, a weak political environment, and laws that don't support dealing with a crisis. And of course, we have high deficits.

If we were to have a series of events together – namely, if the Chinese trade negotiations fail and Trump moves to impose heavy tariffs on China; if we have Brexit; if we have continued conflict in the Straits of Hormuz and oil shipments are threatened; if we have a failure of a big oil nation like Venezuela. Now, we don't have to have them all, but if we have a series of events like this, that will erode confidence. A large-scale world crisis is more than likely – the people I read and talk to, that's what scares them.

Cost: $11 with fresh buffet lunch. Free admission to program only.

Advance lunch reservations and prepayment required for this event.