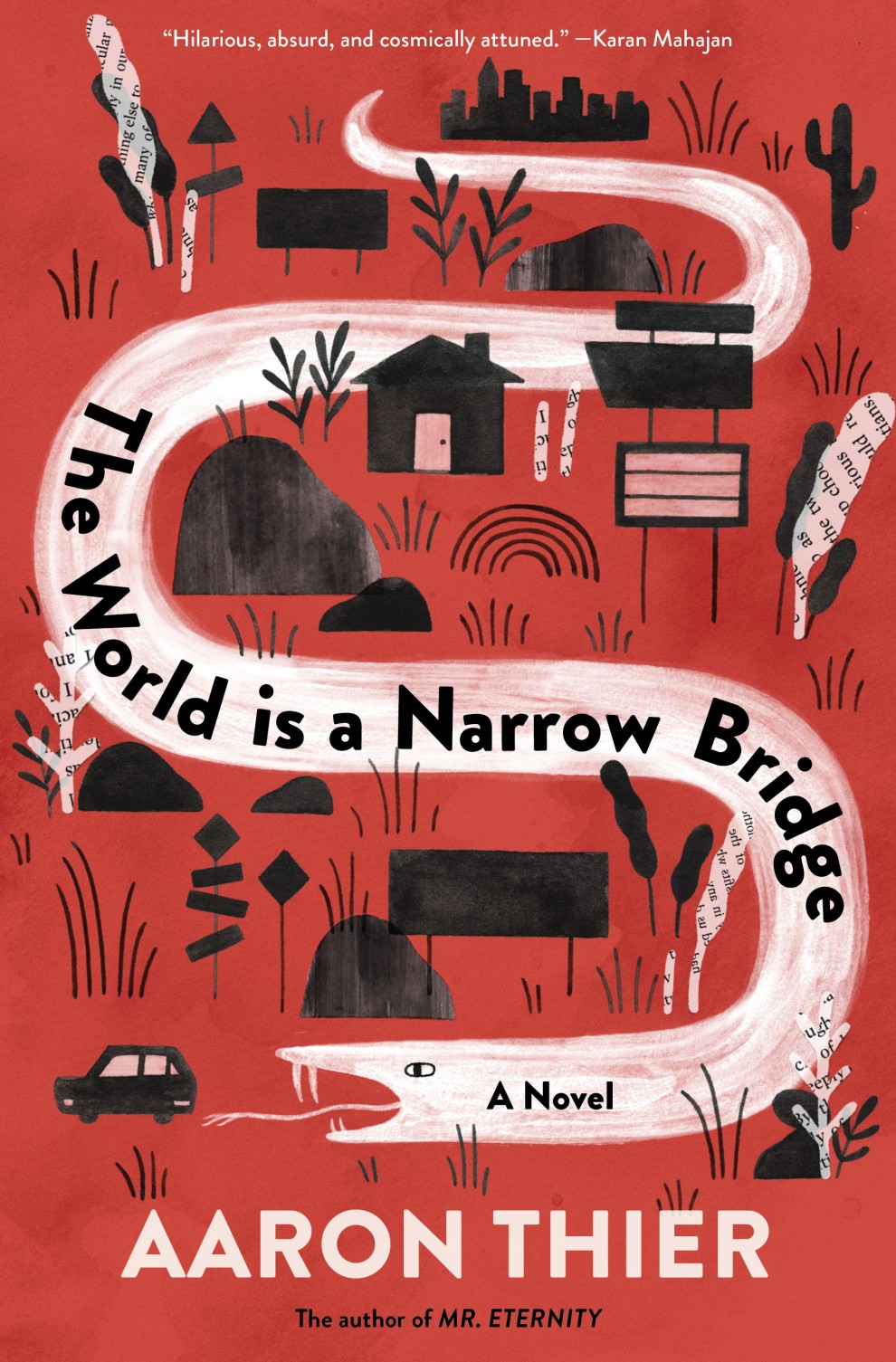 Great Barrington’s Aaron Thier on his novel, The World is a Narrow Bridge

Aaron Thier is a local author who grew up in Williamstown, and after college, graduate school, and stints living in Miami, now lives with his wife and two children in Great Barrington. His most recent book, The World is a Narrow Bridge, follows two 30-somethings in their travels across the United States, as one of them is compelled by Yahweh, the God of the Hebrew Bible, to proclaim that He alone is God. Along the way, they meet Satan (who turns out to be a sweet guy), unintentionally impersonate an eccentric couple, turn up in unexpected places, struggle over whether or not to have a child, and raise important questions about what it means to be human in America after the 2016 elections.

“It’s a charming and thought-provoking book,” says Rabbi Seth Wax, Jewish Chaplain at Williams College, who recently caught up with Aaron to discuss it. What follows is an edited and redacted version of their conversation.

SETH WAX: How did the idea for the book evolve?

AARON THIER: I tell it like a joke, but it’s actually true. I started writing a novel about all the 19th century US presidents living together in a condominium building in South Florida. When I think about, it became the new book quite naturally. But I think what happened was, I thought, “Well, since I have the presidents, maybe I can have some literary characters.” So I added Huck Finn at first. And then I thought, “If I have Huck Finn, why not Yahweh?” And then once Yahweh appeared, he just swept everyone off the table.

SW: He does have a way of taking up a lot of space whenever He shows up. How did you end up on Yahweh? How did he evolve as a character?

AT: What I was trying to write was how we got to where we are: why does America look the way it looks today? What would those 19th century presidents think about it? But there are deeper questions than that. I started thinking about all the deeper things that you can’t argue with. You spread a veneer of a political system over a chaotic reality of human life, and that was what I wanted to talk about. It started out cartoonish and flip, but by the end it became deadly serious. The Yahweh character is very much a character. I was thinking of the biblical depictions of Him as compressed metaphorical representations of what it feels like to be a human. In that way, those stories are immensely meaningful and have great explanatory power.

SW: In your book, Yahweh is powerful, and He often says that He is compassionate. But Yahweh actually comes across as insecure, moody, capricious, and actually kind of mean. Which is also how He sometimes appears in the Hebrew Bible. Toward the end of the book, you suggest that Yahweh might be an avatar for our worst intentions or our darkest side. What do you mean by that?

AT: The notion that he’s an avatar is like saying he’s a living metaphor. He’s an idea that walks around. And it may not be clear in the book, but Yahweh’s interactions with Murphy and Eva are simple and stereotypes. This is just how he talks to creatures like this. He won’t compromise with them, and he won’t discuss anything with them that they want him to reveal. But then there’s a sense that he does have this other existence. And some of his anguish derives from his own feeling of helplessness in the face of whatever incomprehensible problems he’s facing and what he might think of as his “real life.”

SW: This book is about a man and a woman who about the same age as you and your wife and who both lived in Miami. Talking with you, it seems like some their dialogue and inner monologues may have been lifted from your life. Also, the characters talk a lot about whether or not to have kids. Was this book inspired by your life?

AT: Oh, for sure, it’s 100% autobiographical. I tell people it’s non-fiction sometimes. We went to graduate school in North Florida and lived in Miami off-and-on for a period of six years. We also have a two-and-a-half year-old and a three month-old.

SW: Can you talk about your Jewish background?

AT: I went to Hebrew school in North Adams. At first, I had a simple-minded idea that I didn’t believe in God, so I couldn’t engage with any of the rest of it. That went away quickly. I got a sense that the religion is separate from the ethnic identity. I thought of myself as Jewish because I had to, because other kids shouted at me about it at school. But as I got older and experienced some of the bad things, there was an experience that I couldn’t think my way out of. There was no intellectual component that I could move around; it wasn’t any good to think about it. And I needed another way to frame that problem. After college I came back to Williamstown and came to synagogue and started reading the old stories, as stories, just because my background is literary. It was very meaningful for me in a lot of different ways. The stories felt like they belonged to me, because I’m Jewish, and my people had written them long ago, and they still seemed to speak to me. And services themselves, because I had this rabbi who talked about God in all these different ways, was meaningful because he offered all these different ways of framing what I was thinking about. So it was very personal. And that didn’t have that much to do with eternity.

SW: The title of your book is, The World is a Narrow Bridge. It’s a line that’s attributed to the Hasidic master Rabbi Nachman of Breslov, there’s a popular tune for it, and it has become somewhat well-known. What’s interesting is that when you introduce the phrase in the book, it’s offered by Satan – who is a really nice guy – and it’s given to the main character, Eve, as something she can say when she is afraid. What does this phrase mean for you?

AT: I remember singing the song in Hebrew when I was little. A few days after the 2016 election, I went to my synagogue. There were a lot of people there that day. I was looking for a space outside this contemporary reality where I could connect with myself and my history. And Rabbi Neil Hirsch had everybody chant this phrase in English over and over again. Just as a way of thinking about what does it really mean? I found myself over the next couple of months repeating it to myself. And I don’t know why, but it helped tremendously. It could be that the bridge is directional. You have to keep moving in one direction. You can’t stand still because then you’re just on the bridge. The way Satan talks about it, and the way I thought about it at the time, is that this is poetry that has meaning I can’t really articulate. Because if I could, I would say it in a different way. But I’m saying it in this way because it has incantatory meaning.

SW: What do you hope your reader will take away from your book?

AT: I always want to write a book that’s entertaining. Because I believe in the value of entertainment; it’s an important part of being a human being. But because I was writing after making peace with what happened in 2016, I was thinking about comfort. The comfort of the long, long, long view. The comfort of that incantation: the world is a narrow bridge. Of embracing the notion that most things, you’re not going to understand, but it might be fun to think about.