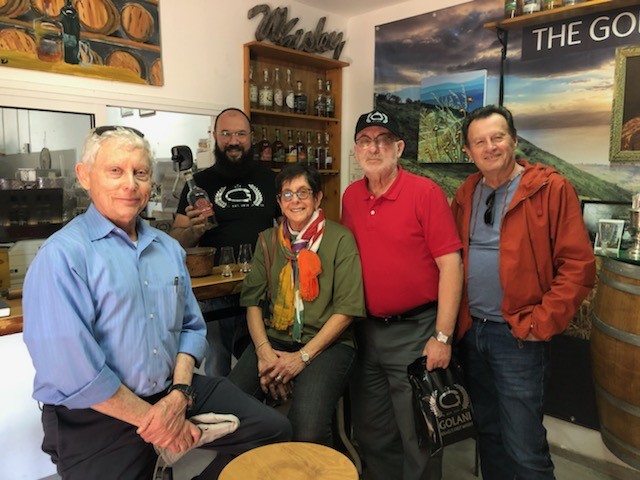 Enjoying a little bronfin in the Golan Heights

My wife Sabina and I landed in Eretz Israel on March 5, the vanguard of a delegation of 20 Berkshirites planning to join hundreds of North Americans in a nine-day tour of Israel sponsored by Chabad. Within hours of landing we were informed that the tour was canceled, and within a few more hours we were told by the Israeli government that it would be very good if the tourists go home and let the Israelis face the coronavirus without visitors traipsing around the country.

Talk about miracles in the Holy Land? Try communicating with El Al during a crisis in order to change your flight plans. After numerous telephone calls and ignored emails, we drove over to Ben Gurion International Airport to track down a live El Al representative. He told us that we had just gotten lucky - he could fix us up with two seats on a midnight flight to Newark in only five days.

We now had five days to see what has to be seen in Eretz Israel. My wife whipped out her “must see/do” list, editing it down to Yad Vashem, the Tel Aviv Museum of Art, the Yitzkhak Rabin Museum, Herzl Cemetery, Caesarea, and the Golan Heights. At the mention of Golan Heights, I have an epiphany. I reached deep into my back pocket and pulled out a note sent to me from a friend who had attended my whisky tasting in my shul in Riverdale reminding that his daughter living in northern Israel is friendly with woman who is married to one David Zibell, co-owner and master distiller of Golan Heights Distillery in the town of Katzrin, in the heart of the Heights.

The trip to the Golan Heights immediately went to the top of my agenda. Last summer at the Berkshire Hadassah sponsored whisky tasting, I was able to procure via Scotland a bottle of Israel’s first single malt whisky from the new Milk and Honey Distillery in Tel Aviv. Now I had the opportunity to visit Golan Heights Distillery and come back to America and boast that while others scrambled to get out of Israel, I was able to visit Israel’s other whisky-making distillery. And so with my cousin Menachem (Ph.d, economist, professor, consultant to a dozen countries in Asia and Africa, former tank commander in the Golan Heights during the Yom Kippur War, and recent convert to the refineries of a good whisky) as our guide and driver we made our way through Tiberias, past Lake Kineret and into the Heights until we reached Katzrin, the home of Golan Heights Distillery.

We were greeted by both Mr. and Mrs. Zibell and given a tour. David explained how he arrived at making whisky in Israel via France and Canada, where he grew up. We walked through the warehouse with its numerous casks of neatly labeled casks. David informed us that the distillery had only recently begun to sell grain whisky within the last few years and he was in the very early stages of finishing off his first single malt whiskies, the kind we scotch snobs so covet. We then walked over to a cask of aging single malt and David extracted several drams of whisky through the bung hole. Then we moved into the tasting room where we enjoyed the grain whisky, but especially and surprisingly savored the very young single malt.

For a dose of reality and to remind us what living in Israel was like, before returning to central Israel we stopped at the nearby Shalom Ridge, formerly occupied by the Syrians until 1967. We could throw rocks at the Israeli kibbutz which lay straight down below our feet. Syria was about 200 yards to the north, and Lebanon about 400 yards to the northwest. Yet where we stood, our Israeli cousins were working, learning, growing, (and making whisky) and living fruitful rich lives.

Photo: Alex Rosenblum (in red shirt) enjoying a bit of bronfin at the Golan Heights Distillery with David Zibell, co-owner and master distiller (in black shirt)