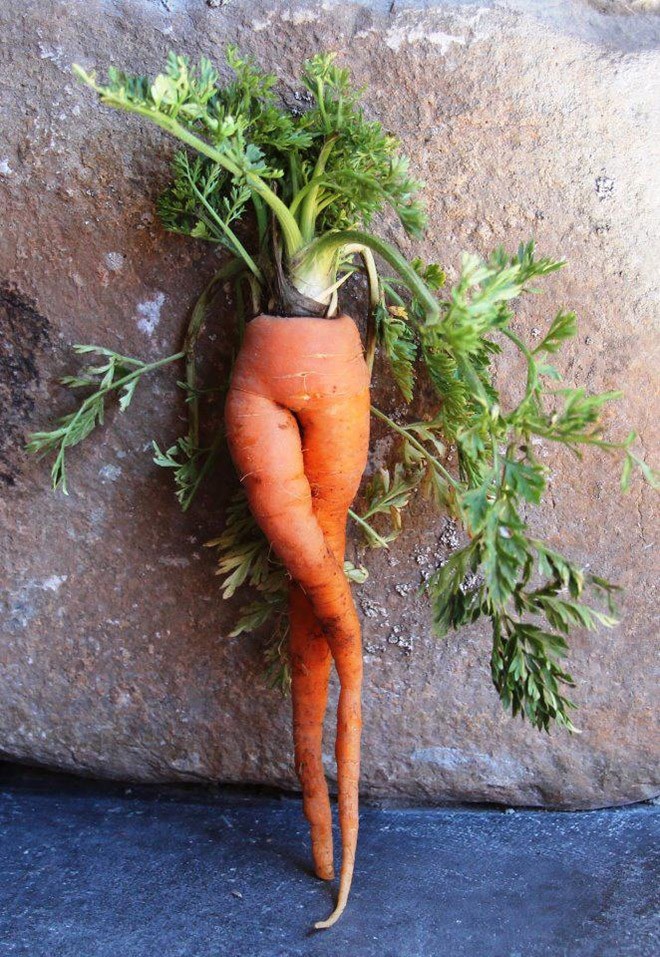 We all know about apples and honey during the fall holidays, but many traditional Jews also like to display a variety of other symbolic foods on their Rosh Hashanah dinner tables, making for a sort of Seder. Of course, depending on the background of the participants — Sephardi or Ashkenazi, and even by country of birth — the specific foods can vary, but they may include pomegranates, dates, string beans, beets, gourds, leeks, black eyed peas and, to signify the beginning of the year, the head of a fish, cabbage, garlic, or even (OMG) a sheep.

One of my favorites, however, is the carrot. Chosen not for its sweetness, crunchiness, or color, it takes its place among the other foods due to a Hebrew play on words. In fact, there are two possibilities, according to phonologists who love to parse words. The first is that the Hebrew word for carrot, gezer, sounds very much like gzeira, or decree. In our new year prayers, we ask God nullify any evil decrees against us.

The second explanation comes from the Yiddish. Ashkenazi Jews dubbed carrots mehren which sounds much like merin, the word for prosperity. So, to further the symbolism, they sliced the bright orange veggies into rounds to look like gold coins, often drizzled with golden honey. (Many cooks prepare carrot coins also at Hanukkah, as side-dish gelt.)

The cultivated carrot is one of the most popular root vegetables grown in the world, and while we are probably most familiar with the bright orange variety, carrots can be found in many other colors today, ranging from yellow to purple. But, the version we buy in the supermarket or at the farmers market derives from a tiny, and wild, white root that has taken millennia to bring to its current colorful and sweet state. In fact, archaeological excavations at pre-historic cave dwellings have unearthed wild carrot seeds, dating back nearly 5,000 years. But, even much later, in Greek and Roman times, records indicate that they were used only for medicinal (and aphrodisiacal) purposes and not for food.

You can actually forage for these ancestors today while you gambol in your local field. Known in these parts as Queen Anne's Lace in the second year of a biennial cycle, the first year plants can be harvested for its root. White, with a tough inner core, they are so tiny that it would probably take a few hours to gather enough to make a simple side dish. But, hey, exercise and fresh air are as good for you as carrots, right?

But if you do decide to forage, you must be vigilant, as the wild carrot looks like poison hemlock. Eating the wrong plant could put a real damper on your picnic. (If you'd like to join me around the first frost to dig up some of these roots, send me a note!)

The first evidence of carrots being cultivated as a food crop was in the Central Asian Iranian Plateau and Persia in the 10th century. The practice then spread westward to North Africa and Europe, and eastward to Asia.

According to renowned food historian Gil Marks, the carrot first appeared in the Persian Jewish community in the 11th century, and was significant enough that rabbis actually wrote about it. It wasn't until the next century that our Spanish cousins could find them in the markets, but eventually carrots spread north and east, arriving in Poland by the 14th century. But those carrots were still purple, yellow, and white.

The Netherlands were known for their carrot farming back then, and in the 17th century, Dutch botanists developed a new color that was not only sweeter, but higher in beta carotene – and orange. According to the World Carrot Museum (yes, there is such a thing), they did this to honor of William of Orange, the Dutch king who had fought for Holland’s independence from Spain.

The carrot arrived in America with the Pilgrims in the early 17th century, and Jews certainly used it in their cooking once they came to these shores. In fact, Gil Marks notes that in the 1912 Neighborhood Cook Book, published by the Portland, Oregon Council of Jewish Women, a recipe for carrot cake first appeared. How Portland's cake got together with Philadelphia's cream cheese is cause for further research. (Note to self: put cream cheese on the grocery list.)

And, of course, leave it to the Israelis to prove that carrots aren't just for eating. In 2005, the Tel Aviv-based company Yes to Carrots began to develop cosmetic products using the vitamins with minerals from organically grown carrots and other vegetables, in combination with Dead Sea mud and minerals, into health and beauty products such as shower gel, shampoo, a hand cream, body lotion, and body mist.

This is a super easy and super delicious way to prepare carrots. The high roasting temperature makes for a sweet and delicious caramelized carrot. The thyme adds a lovely lemony and minty touch.

3. In a bowl, combine carrots, olive oil, salt, pepper and thyme and toss well. Scoop carrots onto the baking sheet and roast, stirring once midway through, until nicely caramelized and tender, about 25-30 minutes.

4. Taste and adjust seasoning if necessary.