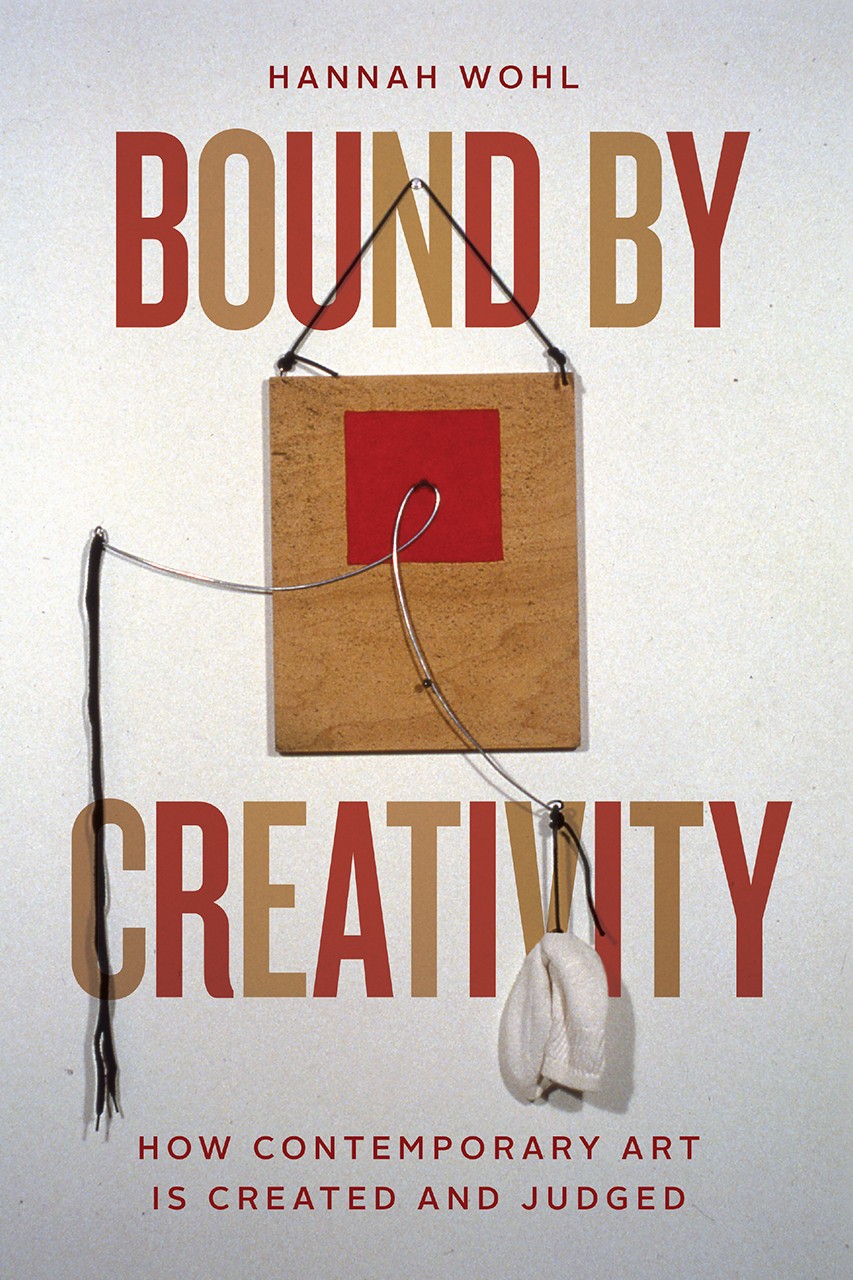 LENOX - Berkshire native Hannah Wohl has just published her first book, Bound by Creativity: How Contemporary Art is Created and Judged (University of Chicago Press). In it Wohl, now an assistant professor in sociology at University of California, Santa Barbara, examines the New York art world through a sociological lens.

Although a scholarly work, Bound by Creativity offers satisfactions for the non-academic reader, as well, particularly Wohl’s observations about the business of art. Her fieldwork took her across many intersecting realms within New York’s art community, from grungy artist studios to prestigious (and not-so-prestigious) galleries to the art-filled homes of super-wealthy collectors. Her descriptions are incisive and often arch, and provide an enjoyable, if not always flattering, portrait of the contemporary art scene and the people who inhabit it.

On Tuesday, September 14, the Lenox Library (18 Main Street) will host Hannah Wohl as part of its Distinguished Lecturer Series. The lecture is free and open to the public, and begins at 5:30 p.m.

Hannah Wohl is the daughter of Dr. Charles Wohl and Alba Passerini, a past member of the board of the Jewish Federation of the Berkshires. About her trajectory from the Berkshires to academia, Wohl writes:

I grew up in Lenox and attended religious school at Temple Anshe Amunim from kindergarten through high school, where I solidified friendships that continue to this day. Through the Harold Grinspoon Foundation, the Federation provided me with scholarship money to attend Brown University, where I majored in sociology. After working at a nonprofit, I decided to pursue my PhD in sociology at Northwestern University. There, I turned my focus to the sociology of culture, which allowed me to join my academic interests in sociology with my personal interest in art. I was interested in understanding how creative producers across fields made decisions about how to create their work. The contemporary art world was an ideal place to study this, both because I had a personal interest in the field and because there is a lack of consensus around what “good” contemporary art is.

Bound by Creativity is both a description of the current art marketplace and an exploration of the cultural and aesthetic values of today’s art world. If you care about art and art history, it has a lot to tell you.

A summary of Dr. Wohl’s thesis: The “art movement” era, which began when the French Impressionists broke with the establishment art academies in the 19th century, ended in the last decades of the 20th century. These transformative and radical art movements took artmaking to formal and theoretical extremes. She writes: “Art movements diminished in salience because there was no clear consensus around which movements constituted the forefront of the avant-garde. Artists were no longer primarily valued for being part of innovative movements, but instead for having distinctive creative visions.” For an artist, “a good creative vision is one that is distinctive and has enduring consistencies, while evolving through continued experimentation.” The art world is “a ‘winner takes all’ market, where a small number of people capture the lion’s share of critical and commercial success.” The essential players in that market are the artists, the dealers/gallery owners, curators, critics, and collectors. “Like artists,” she writes, all of these players “view themselves as having creative visions, in that they perceive continuities among the works that they select and believe that they have certain aesthetic sensibilities that guide these choices.” The interplay of these various creative visions not only shapes the art market (and how work is judged aesthetically) but influences artists’ creative processes, as well. Ultimately, this interaction, informed by social values, defines our contemporary aesthetic by determining how work is created, funded, and exhibited.

Berkshire Jewish Voice: “Creative vision” is one of your book’s key concepts. Could you explain what you mean by the term and how it drives the dynamics of the contemporary art world?

Hannah Wohl: We often use the term “signature style” similarly, although I prefer creative visions because signature style is often used pejoratively in the art world to connote branding one’s work. I define creative visions as bundles of elements that are enduring and core in a body of work. These elements are both formal, such as media and technique, as well as conceptual, such as ideas and themes. For example, a contemporary artist may often work with everyday materials, like socks and hummus containers, to express ideas of domesticity, and these materials as well as the theme of domesticity would all be part of this artist’s creative vision. Artists identify and hone their creative vision through the process of experimentation. They experiment with different elements and repeat elements that excite them, and then recognize these repeated elements as consistencies, which they associate with their creative visions. As artists get bored with these repeated elements, they experiment with new elements and their perceptions of their creative visions evolve. Others, like dealers and curators, do not judge individual works discretely, but as part of bodies of work, or oeuvres. They buy the work of artists who they view as having “mature” creative visions but as still evolving their bodies of work, which requires artists to balance both consistency and variation within their bodies of work.

BJV: One of the enjoyable aspects of your book is your reportage about New York City’s art scene, in which you navigate disparate cultural and economic realms and realities alongside the subjects of your fieldwork. I particularly liked your observation that “The city sorts people, pushing them together or ensuring that their paths do not cross.” How did your immersion in these divergent worlds as a sociologist shape your narrative and your point of view about contemporary art is created and judged?

HW: Artists tend to live and work in cheaper neighborhoods, often in Brooklyn or Queens, while most collectors live in Manhattan, and galleries clustered in the Chelsea and Lower East Side neighborhoods of Manhattan. The world that artists (especially emerging artists) inhabit is very different from that of collectors.  I sometimes found myself spending the day in an artist’s paint-splattered studio and the night at an Upper East Side penthouse for a collector’s private party. What I found fascinating as an ethnographer was that these disparate worlds did, in fact, frequently collide. Artists often had close relationships with their dealers and collectors wanted the bohemian experience of socializing with artists. There were important power dynamics at play here, as artists relied on collectors to purchase their work. Artists were far more sensitized to these power dynamics. While collectors described their interactions with artists in terms of friendship and leisure, artists described these interactions as always, at least in part, work. These interactions also influenced what happened in the studio. Even though artists worked alone in their studios or with the help of studio assistants, their contact with their peers, dealers, curators, collectors, and others in the art market meant that they could not seal themselves off from how others perceived their creative visions. The creative process is social, even when it occurs in solitude.

BJV: You write about the explosive growth of university art programs in which “students are taught to see art as a professional career and to view articulating their voice as their chief task.” Within the art scene, the expectation is that artists publicly “interact in ways that show their eccentricity, aesthetic commitment, and economic disinterest” – if only, in some cases, to liven up the stodgy work-focused and money-centric lives of prospective collectors. Can you say more about these three qualities that artists must display to get ahead in a market oversupplied with artists?

HW: The idea of creative visions is not only attached to the work that artists produce, but also to artists themselves, because people see creative visions as an authentic expression of artists’ identities. One of the reasons that collectors want to get to know artists is because they often think it will help them better understand artists’ creative visions, and this is what they value when they purchase art. Artists often display eccentric and unruly behavior, such as dressing in unconventional ways or making inconvenient demands upon their dealers. Dealers manage their behavior from going too far, but also cater to artists both because it appeals to collectors and because to be “good dealers,” they must be perceived as supporting and not intervening in artists’ creative visions. Artists also display obsession with certain aesthetic themes, often highlighting that they have worked on these themes for decades and cannot stop, as well as economic disinterest, or a lack of financial savviness and attention to making money. By showing that they have these qualities, artists claim that they have authentic creative visions, in that they have a distinctive worldview that they are committed to for purely aesthetic reasons.

BJV: As I read your book, I was struck by the absence of two words I might have expected to see. The first is “post-modernist,” which doesn’t appear at all, even though the approach to art (referential and unmoored to a particular movement) that you chronicle is often described as such. Was shying away from that term a writerly/scholarly decision, or is the label “post-modernism” inapt or simply irrelevant? The second word is “beauty,” which appears just once in the text (although “beautiful” appears several times in varying contexts). The term you use that most closely approaches the concept of beauty is “aesthetic value,” which you variously characterize as “not objective,” “radically uncertain,” a quality “anything can have.” It’s also a term that holds an intrinsic monetary connotation. My question – is the “beauty” of an art object something that is much considered or discussed among artists, dealers, and collectors in the New York art world you chronicle?

HW: I try to understand the world from the perspective of the people I study, so I often convey this world using their terminology. Postmodernism was not a term that people in the contemporary art world often used, mostly likely because interest in this movement peaked in the 90s and also because postmodernism became such a broad catchall term that the meaning became watered down. Beauty is sometimes jokingly called “the B word” in art school. One of the central tenets of contemporary art is that, while contemporary art may sometimes be beautiful, it does not need to be, and contemporary art is not created for the sake of beauty. Contemporary art is supposed to be a form that expresses an idea. This idea often cannot be easily reduced to words but instead conveys a mood or synthesis of concepts. However, there is no clear consensus around which ideas are most important or when a form adequately captures these ideas. Ultimately, creative visions anchor aesthetic judgments in the contemporary art world. Each artist identifies formal and conceptual elements that are relevant to their creative visions, and others judge work based on what they think appears to be a distinctive creative vision and based on what is relevant to their own creative visions.