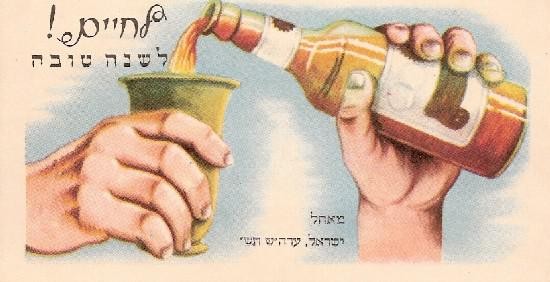 Outside on a beautiful late spring Shabbat (Shelakh Lekha) in the Berkshires, we had just finished davening on the deck and were gingerly taking small steps towards normalcy. Wine and packaged snacks were carefully passed around. Unexpectedly, a bottle of Milk & Honey Israeli whisky appeared and shots were (a bit warily) distributed. One of the khevreh, seeing the source of the whisky, passed a flippant remark about how alcohol was becoming a staple of Jewish life. Another quickly chimed in that alcohol has long been such a staple, citing a passage from the Torah reading highlighting wine as an important function of prayer.

Pausing to finish my drink, I then pointed out that alcohol has indeed been an integral part of our Jewish history from biblical times up to the present. At various whisky tastings in New York and here in the Berkshires, my statement is usually challenged by members of the audience. After all, Jews as alcoholics – shickurs? Can’t be! Not us!

But proper use of alcohol as prescribed by our Torah, prophets, rabbis, and our tradition of temperance has made alcohol an important religious, social, and economic part of Jewish life through five millennia. Making kiddush every Friday evening and on yom tov has not made our people into drunkards. The joy and importance of making a special toast – a l’chaim – is a significant tradition to happily acknowledge special events and occasions and has not made us into drunkards.  And for those of us whose last name incorporates “shenk” (tavern), “kretchmer” (innkeeper) or the more common “wein” (wine), be assured that at some time in the last few hundred years, somewhere in Eastern Europe, we had a family member involved in a business which involved managing, supplying, or working in a tavern, inn, or brewery, and/or engaging in bookkeeping, or moneylending (services that were usually based at a tavern or inn when provided by Jews).

When I explain those connections to descendants of Eastern European Jews, inevitably, someone (more often than not a senior citizen) will exclaim that he or she remembers stories from parents and grandparents about a family association to some form of the liquor industry. (For example, as I prepared this story, the peerless editor of this newspaper informed me that his mother’s family operated a distillery and tavern in the town of Kozhanhorodok, then in Poland, now in Belarus.)

The guidelines, uses, and abuses of wine and strong wine (shekar) is found in over 50 passages of our Torah. Wine is a gift from God to be used joyously, correctly and expeditiously. But, needless to say, misuse of wine can lead to bad results, as seen by Noah, Lot, and Aaron’s two older sons. What’s more, numerous references, including warnings and proper uses for wine and strong drink, are made by our prophets. As a result, we have had a historic guideline for the temperate use of alcohol.

During the Crusades period until the end of enlightenment period, Jews had moved and/or been forced out of Western Europe – England, Germanic kingdoms, France, and the Iberian Peninsula. Many settled in central and eastern Europe. By the 18th century, most of the world Jewry lived in the lands that would become the Austria-Hungarian Empire, the Polish Empire, Ukraine, and the lands between Ukraine and Russia that would become the “Pale” of  Russia. As the aristocracy became more powerful and richer in these kingdoms, they realized that the grain grown in their vast estates could produce twice the profits if, instead of it being used to make bread and basic foods, it was distilled into alcohol for consumption by the masses. A conspicuous involvement in the liquor trade was not something with which these aristocrats wished to sully their hands, however, and they devised ways to operate taverns and inns as absentee landlords. To help them preserve their reputations, the aristocracy turned to the Jews.

Jews in Eastern Europe were not allowed to own land. Many had turned to trading and peddling, so they often had networks of connections and contacts in other towns and cities. The aristocrats tended to view the Jews in their towns and cities as well-educated, reliable, and good businessmen. Not only that, Jews had the reputation of being temperate in their alcohol usage – Jews were not going to drink up the merchandise!  The 18th century, incidentally, also saw the birth of Hasidism, with its goal of achieving ecstasy by approaching God more closely. Hasidim soon gained a reputation of being “robust” drinkers – but the personal self-restraint with alcohol characteristic of the movement’s powerful and charismatic rabbis helped that the Hasidic enthusiasm for drinking never tainted our people’s overarching reputation for sobriety.

A system developed wherein Jews leased taverns and inns, and soon managed a majority of alcohol-related businesses in eastern and central Europe. In the Austria-Hungarian Empire, as well in parts of emerging Germany where Jews had been granted more freedom, Jews also came to own and manage wineries, breweries, and distilleries by the mid-19th century.

In 1882, Baron Edmond de Rothschild, owner of France’s prestigious Château Lafite, provided financial and technical assistance in establishing what would become Carmel Wine Company in Eretz Israel. Vineyards were cultivated in Rishon LeZion and then on Mount Carmel, south of Haifa. By 1895, wines from the Holy Land were being imported to Eastern Europe and around the Ottoman Empire. The early heyday of Carmel Wine Co. did not last long, enduring only through the early decades of the 20th century – its main markets were eviscerated by revolution in Russia, prohibition in the United States, and Arab nationalism in the Middle East. Today, of course, Israel is in the midst of a winemaking renaissance.

While Jewish involvement in the alcohol business largely diminished by the beginning of the 20th century because of the growth of virulent anti-Semitism in the Pale and mass exodus of the Jews there, Jewish involvement in the liquor industry had already been introduced to America with the immigration of some 200,000 German and Austria-Hungarian Jews from about 1840 to 1900.

Jews emigrating to America took with them their experience in the liquor trade. One of these entrepreneurs was Charles Fleischman, who came to America with his recipes for yeast and a background managing a distillery in Vienna. He soon made a fortune on his yeasts and, by the turn of the last century, built and owned a vodka distillery and America’s first gin distillery. Perhaps his greatest contribution to American Jewry involved his response to being turned away after making a reservation at a hotel in central New York State. He simply and quickly built his own fancy hotel in a nearby region called the Catskills, and the rest is American Jewish history!

Other immigrants settled in Midwest states such as Ohio, Illinois, and Kentucky.  The Bernheim family opened a bourbon distillery with a distinctly American name, I.W. Harper, and was followed by other Jewish immigrants to the point that it was estimated that while Louisville had a population that was 3 percent Jewish, Jews made up about 25 percent of the bourbon/liquor industries. Similar figures were found in distillery cities such as Peoria and Cincinnati. These soon-to-be wealthy Jews who made their money on distinctly American liquor largely tended to support the growth of distinctly American  Jewish movements such as Reform Judaism, Hebrew Union College, and YMHA. By and large, early Jewish involvement in the American alcohol business was met with little anti-Semitism. After all, many previously founders of liquor businesses were themselves recent immigrants from Ireland and Germany. But with the coming of the 20th century, the liquor industry in general and also the Jewish involvement came under fire.

McClure’s magazine in 1909 noted that their  “acute and unscrupulous type of mind which had taken charge of the wholesale liquor trade in this country.” And Henry Ford complained that the liquor industry had become “rot-gut” because distillery cities like Cincinnati and Louisville had become a city of “Judaic complexion.” A few decades earlier, the Women’s Christian Temperance Union had been founded with the aim to shut down consumption of alcohol. As Christianity moved to the right and America urbanized (including the opening of numerous bars in each neighborhood resulting in increased consumption), Jews were caught in the middle.

This American preoccupation with temperance was not of particular Jewish concern. Simply put, Jews were not prone to join a “Christian organization,” alcoholism was not a Jewish problem, and the newly arriving hundreds of thousands of Jewish immigrants were too busy just trying to survive. As pointed out by one historian and independently verified at our occasional tastings and gatherings, many people remember a zaydeh making wine from grapes or plums in the basement or in the closet.  Alcohol prohibition or not, almost every Jew had access to wine for kiddush!

The passing of the 18th Amendment to the US Constitution in 1920 prohibiting the sale and transport of alcohol in the United States presented new and “unique” opportunities for the North American Jewish liquor entrepreneurs. Stay tuned for more on Jews in the Prohibition era and beyond in an upcoming issue of BJV.

For any comments, observations, thoughts, kvetching, drop me a line at arosenblumlaw@gmail.com. And for additional reading, see Glenn Dynner’s Yankel’s Tavern – Jews, Liquor & Life in the Kingdom of Poland and Marni Davis’s Jews and Booze – Becoming American in the Age of Prohibition. Check inter alia on the internet: myjewishlearning.com for “The Forgotten History of Jews in the Alcohol Business” and the thedailybeast.com for “The Jews Who Made American Whisky.”