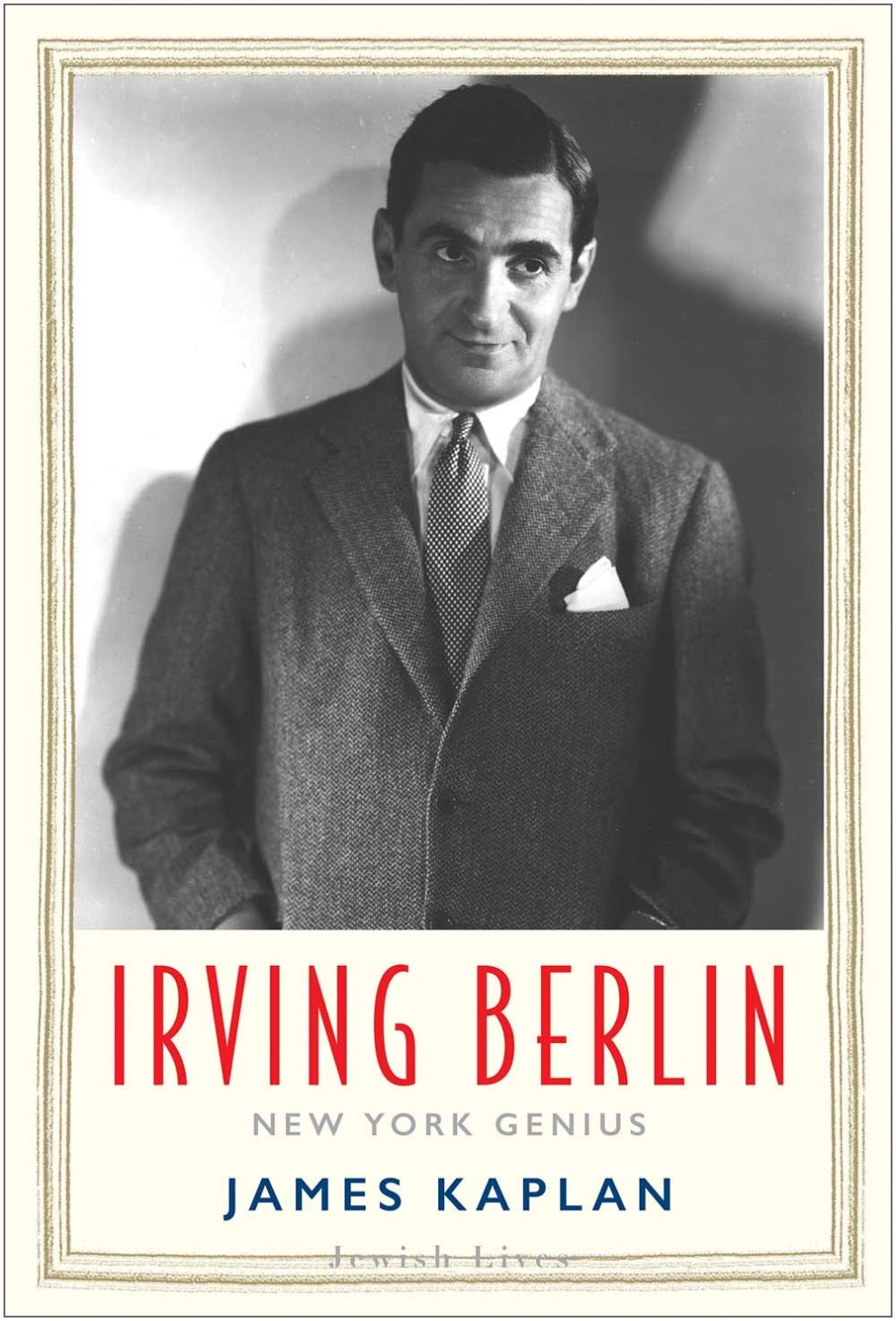 Book Review by Albert Stern / Special to the BJV

With Irving Berlin: New York Genius, James Kaplan has accomplished a feat that is too rarely achieved by biographers – crafting a portrait of a significant figure that tells you everything you need to know about his life, art, and achievement without sharing more information than you might care to read.

This briskly paced and accessible biography of the songwriter and showman is part of the “Jewish Lives” series published by Yale University Press. Kaplan the scribe seemingly absorbed Berlin the tunesmith’s own modus operandi – keep things simple and sophisticated without letting the final product betray the labor it took to achieve that simplicity. As Kaplan writes:

Nothing, [Berlin] discovered, was so complex as simplicity. “I sweat blood,” he said. “Absolutely. I sweat blood between 3 and 6 many mornings, and when the drops that fall off my forehead hit the paper they’re notes.” [p.40]

Kaplan’s own 33 pages of endnotes attest to the considerable amount of research he conducted about Berlin’s life and times – literally a century of American history, as Berlin was 101 years old when he died in 1989. He deftly avoids getting entangled in the morass of history that ensnares too many biographers, who can’t resist either sharing interesting but tangential information they’ve happened upon, or spinning their own take on the meaning and import of the historical period their story falls into. Kaplan assumes his readers will possess general historical knowledge about the era(s) Berlin lived in, as well as a familiarity with the work and cultural significance of the many outstanding artists, entertainers, and impresarios with whom Berlin’s career intersected. His book is all the better for it.

The other morass Kaplan manages to avoid is psychologizing. It would no doubt be very tempting for a biographer who knows as much about his subject as Kaplan does to put a complex figure like Irving Berlin “on the couch.” Although artistically mature, fantastically wealthy, and world-renowned at an early age, Berlin began his life in abject poverty and was dealt crushing personal losses at almost every stage of his life – suffering the death of his father when he was thirteen, becoming a widower at age twenty-three, and losing his only son to sudden infant death syndrome and later a beloved sister to suicide. The closest Kaplan comes to psychologizing is to agree with Tin Pan Alley historian Philip Furia that Berlin protested “too much by insisting there is no connection between his sob ballads and his own experience.” He concedes that a songwriter with Berlin’s gifts would be able to write songs in character, but asserts “it’s also important to keep in mind that there is such a thing as the unconscious, that we all have one, and that it’s a faculty with which artists tend to be on good, if even speaking, terms.” (pp. 49-50).

Irving Berlin sublimated his inner demons through a “work ethic that knew no bounds,” writes Kaplan. And what a career he had, perhaps the richest and most fruitful in show business history. Israel Baline was born in Russia and came to New York City with his parents at the age of five, the youngest of six children who resided in a basement apartment on the Lower East Side. After his father died, the adolescent Israel worked as a busker in the roughest downtown dives, mastering the popular musical idioms he would employ in his early songwriting successes, which culminated in his first colossal smash, “Alexander’s Ragtime Band” (1911). By his early twenties, he was already a prosperous internationally-recognized hitmaker, a titan of popular music as both a songwriter and publisher before and after the advent of radio. He was an integral figure in the development of Broadway, not only as a creative artist but as an impresario who, with partners, built the Music Box Theater on 45th Street to present revues featuring his work. Berlin conquered Hollywood by scoring films like Holiday Inn, Top Hat, and Follow the Fleet, the latter featuring the immortal dancing of Fred Astaire and Ginger Rogers. He developed and performed in military-themed revues during both world wars, and traveled bravely while in his mid-50s in both the European and Pacific theaters to entertain the troops.

He was by temperament antsy and also peripatetic, traveling incessantly and sequestering himself in hotels away from distractions while immersed in a project, and moving his household (he remarried and had three daughters, in addition to his tragic son) several times to different grand residences in Manhattan. Kaplan describes Berlin as an earnest family man though one who, in his consuming devotion to his work, was often absent and distracted when present. His company was cherished by the leading lights of Broadway, Hollywood, and the literary world, and he was a true friend to other giants of popular music, among them Jerome Kern, Cole Porter, and George Gershwin.

The egocentrism he possessed – it was not inconsiderable – was egocentrism hard-won and well-earned, yet was undercut by a fear of failure that he never overcame. Kaplan quotes a letter he wrote to a friend: “Every time I start a show…I wonder if this is the time I’ll reach for it and find it isn’t there.” The fine balance between confidence and insecurity was upset after his herculean and exhausting efforts to entertain the troops during World War II in both the European and Pacific theaters of war. Those years “Berlin later said, ‘were the most exciting the most valuable, the most extraordinary of his life…were the great divide…before…after.’” Berlin struggled to create a second act for himself that was personally and emotionally satisfying.

Berlin’s second act opened with one of the greatest achievements of American musical theater – Annie Get Your Gun. Produced by Rodgers and Hammerstein, with a libretto by Herbert Fields and Dorothy Fields, directed by Joshua Logan, and starring Ethel Merman, Annie Get Your Gun was Berlin’s first score in which the songs were integrated into the plot of the musical. Hitherto, Berlin’s musicals were revues built around his songs. At first reluctant, Berlin took on the challenge. Writes Kaplan:

He wrote the bulk of the sixteen-song score in eighteen days. It was as though all his exhaustion and self-doubt had collapsed upon itself and spontaneously combusted in a late-period glory. And he wasn’t just writing for himself and his muse. He had something to prove: to Rodgers and Hammerstein, to the Fieldses and Josh Logan. In return, he depended on their enthusiasm.

But after Annie Get Your Gun, Berlin’s artistic powers ebbed. I find Kaplan’s observation that Berlin wrote songs “for himself and his muse” to be particularly insightful, because aside from intermittent muses Fred Astaire and Ethel Merman, Berlin seemed to write towards his own platonic ideal of an “Irving Berlin Song.”

Writing a timeless song is like capturing lightning in a bottle, a mysterious achievement however one arrives at it, whether through inspiration or perspiration. Berlin, who “sweat blood” over his songs, seems to have despaired when hard work could not produce that undefinable kismet. Artistically, he produced only two more shows of new material, the middling Call Me Madam and the 1962 flop Mr. President, although over the years his older work was reconstituted into several successful vehicles for stage and screen.

It is difficult to read Kaplan’s account of how Berlin’s later years were marred by severe depression, for which he was hospitalized on several occasions. It made me think of the way Shakespeare gave up show business in his mid-forties, and settled into a seemingly contented retirement in Stratford. Would he have, at a certain point, put pen to paper to try and write another Hamlet? Would it have bothered him if he couldn’t? Would he have kept trying? As Shakespeare died at fifty-two, we’ll never know, but Irving Berlin lived 49 years longer than the Bard and spent decades of that time eating out his kishkes because he couldn’t write another “Cheek to Cheek.” The will that propelled him to the top drove him to his depths, and it’s impossible to read the last chapters of Kaplan’s biography without wishing that Berlin, who gave so much, could have found the ability to relax and enjoy his achievements and all the rewards they brought him.

Berlin may have stopped going to shul when his father died, may have worked hard on purging the greenhorn from himself and becoming a true American. “But his kind of assimilation was not denying his Jewishness,” [daughter] Mary Ellin Barrett says. “He was very much a Jew.” And his Jewishness permeated his songs.

Berlin looked back on his tenement upbringing with nostalgia – "Every man should have a Lower East Side in his life," he said, and apparently he often returned to the old neighborhood just to walk around. One the most charming parts of the book relates how the songwriter took a theater columnist on a vivid tour of his old stomping grounds in downtown Manhattan, which included a menschlich stop at a Chinatown mission where “Berlin sang and played ‘White Christmas’ to a chapel full of homeless men.”

What was the most Jewish thing about Berlin? As I read it, it was his passionate love for America and his immigrant’s gratitude for all it gave him. A true patriot, he gave back all he could to the country he loved. And I don’t think his gratitude was strictly personal – the majority of the people who worked in his milieu were Jewish. The dream factory of American show business – comprising the Songbook, Broadway, and Hollywood – may constitute the greatest collective cultural achievement of Jews in galus since the Babylonian Talmud. As it did for Berlin, show business brought riches, fame, respectability, and redemption to his peers, and Kaplan shows how careers intersected, how Jews who shared a hard-driving sensibility forged as outsiders drew on each other’s talents to build American show business.

Kaplan not only chronicles Berlin’s career, but also how essential and transformative that Jewish contribution was to American culture.

Postscript: Two quibbles – there are no photos, and a small sampling would have been nice. And I also wish Kaplan would have put together a song list of versions of Berlin tunes he found appealing as both an introduction to neophytes and just to find out what he likes. But since he didn’t, we did - see what you think.

“I’ve Got My Love to Keep Me Warm,” by Louis Armstrong and Ella Fitzgerald

“How Deep is the Ocean,” by Jimmy Scott (Ray Charles on piano)

“A Pretty Girl is Like a Melody,” Al Jolson

“Let’s Face the Music and Dance,” by Fred Astaire (but be sure to listen while watching him dance with Ginger Rogers in Follow the Fleet)

“Puttin’ on the Ritz,” by Gene Wilder and Peter Boyle, from Young Frankenstein

“When I Lost You,” by Tony Bennett (a cappella!), from the Bennett/Berlin album

“They Say It’s Wonderful,” by John Coltrane and Johnny Hartman

“What’ll I Do,” by Ray Charles (performed for the TV celebration of Berlin’s 100th birthday)

And – of course – Bing Crosby’s “White Christmas”; all of the original Broadway cast recording of Annie Get Your Gun with Ethel Merman; Kate Smith’s “God Bless America”; and Irving Berlin himself singing “Oh, How I Hate to Get Up in the Morning.”