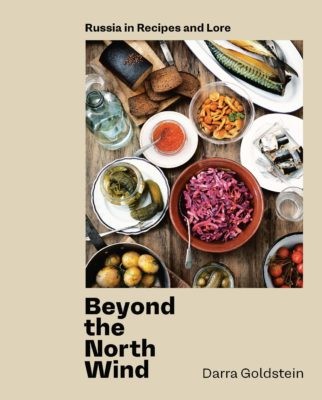 Darra Goldstein’s latest book, Beyond the North Wind: Russia in Recipes and Lore (Ten Speed Press), is a beautiful volume with lyrical writing, stunning photographs, and tempting recipes. It opens with the author setting the scene at 200 miles north of the Arctic Circle — “at the literal ends of the earth” — in winter. She writes that she was “deliberately chasing the past” to go beyond the Russian dining with which most of us are familiar: the Russian Tea Room imperial cuisine and stereotypical proletarian Soviet fare. She was in pursuit of “the elemental flavors underlying traditional Russian cuisine.”

But why winter, in one of the coldest places on the globe? Several reasons. The first is that she had spent a “very good” summer month in Russia but realized that what came to mind when thinking about “Russia” was winter. (Perhaps it was those icicles growing on Omar Sharif’s mustache in Dr. Zhivago.) So, “in order to write a balanced book,” she says, “I needed to go back in winter, to get a sense of place, with the white nights and the expansiveness. To see all the food they had put up in the summer. To see what the markets were like in the winter.”

The second reason is that the places she wanted to visit are more easily accessible in winter. Unlike summer, with its rutted and potholed roads, or spring with its unrelenting mud, winter roads are covered with a smooth surface of ice and snow. Hence, easier travel.

One more reason: Goldstein’s grandparents came from Byelorussia and Ukraine. As with many of our grandparents, they never talked about their life there other than that it was very hard. She regretted that lack of knowledge. Consequently, she became fascinated by the country, its history, its culture, and its food. But she wanted to explore the nuance of the place, not only the tragic parts of its history.

So, this Williams College professor emerita of Russian and culinary history and founding editor of Gastronomica went north to the remote village Teriberka and east to the Arkhangelsk region for an “authentic” Russia.

Now, to the food that she found there. Not all the recipes in the book are completely authentic, as the author has added some twists to suit her taste, but all speak “Russian.” And some of the ingredients called for may be hard to come by. While kefir has been widely available for years now, raw milk may require a visit to a local dairy farm. Black currant leaves, which Goldstein says are used to keep pickles crisp, are there for the taking — if you happen to have a black currant bush in your yard. (You can also use oak leaves whose high tannin content works similarly.) And precisely 350 dandelion blossoms for the dandelion syrup? You may want to enlist some children to gather this particular item in a field free of chemical sprays. Make a contest out of the hunt!

I tested four recipes. Up first was the Pear and Carrot Relish. Russians use it both as a colorful accent to a roast and for afternoon tea. While the relish was certainly easy to prepare with only five ingredients, I found it cloying. Perhaps cutting the amount of honey in half would make it more palatable, unless you, as Russians obviously do, like things really, really sweet.

The Twenty-Minute Pickles, on the other hand, were so good that I’ve made them three times already. Made with Persian (mini) cucumbers and a tablespoon of vodka (this is Russian, after all!), they are both easy to prepare and quite addictive. And no black currant leaves required.

Joel gobbled up an entire batch of twelve of the Vatrushki (less one for me), a sweet bun filled with a sweetened farmer’s cheese. Russians enjoy these pastries for breakfast, tea, and snack time — which is exactly what Joel did. The only caveat with this recipe is that you don’t need a full pound of farmer’s cheese. One seven-and-a-half-ounce package is more than enough.

When I asked the author to recommend just one recipe among the dozens included in the book’s 300-plus pages, Goldstein didn’t hesitate. Her top choice: the Farmer’s Cheese Pancakes. So, it was back to the dairy case. And absolutely worth the trip. These round, little delights were easy to prepare and scrumptious, golden and crispy on the outside, sweet and creamy inside.

A tablespoon or two of heavy cream (optional)

In a medium bowl, beat the egg yolks into the farmer’s cheese, then stir in the sugar.

Mix together 1⁄2 cup of the flour, the baking powder, and the salt and add to the cheese mixture. If the mixture seems dry, add a little heavy cream.

Place the butter and oil over medium-low heat in a large nonstick skillet and melt the butter.

Sprinkle the remaining 1⁄4 cup flour onto a plate and dust your hands with some flour, too.

With your hands or a spoon, scoop out about 2 tablespoons of the batter and set the mound on the floured plate.

Use your hands to gently shape it into a round patty about 2 inches in diameter and coat it lightly on all sides with flour.

Repeat with the remaining batter.

Carefully transfer the patties to the pan and cook them slowly until the undersides are browned, about 3 minutes.

Turn with a spatula and cook until the other sides are browned, 3 to 4 minutes more.

*For all those lactose-intolerant Members of the Tribe, farmer’s cheese is 99% lactose-free!

**We didn’t feel this addition was necessary. The pancakes are just perfect the way they are.