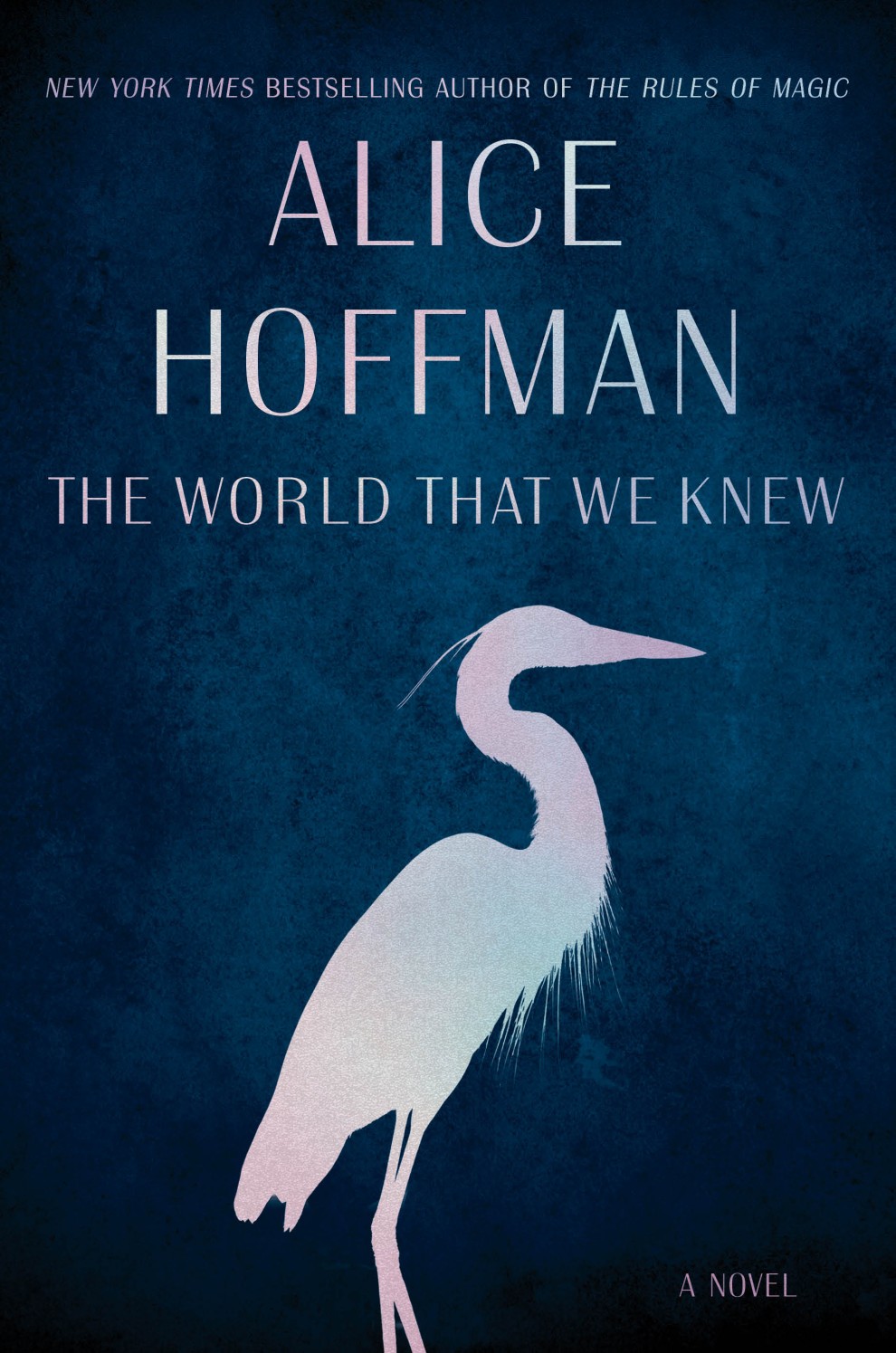 GREAT BARRINGTON – On Friday, October 18 at 10:45 a.m., Knosh & Knowledge welcomes bestselling author Alice Hoffman, who will talk about her latest novel, The World That We Knew.

This special Jewish Federation of the Berkshires program will take place at Hevreh of Southern Berkshire at 10:45 a.m., and will be followed by a catered lunch. Prepaid lunch reservations required in advance. Email federation@jewishberkshires.org, or call (413) 442-4360, ext. 10, to RSVP.

Following her talk, Hoffman will take audience questions and sign copies of The World That We Knew, which will be available for purchase.

“We are thrilled to have Alice Hoffman at Knosh & Knowledge,” says Federation’s Program Director Nancy Maurice Rogers. “We are so grateful to Alice, and also to the publicity department at Simon & Schuster for helping us present one of America’s best-known and best-loved authors at this truly special Federation event.”

In anticipation of Hoffman’s appearance, the Federation is sponsoring a book club, led by Roselle Kline Chartock and in collaboration with The Book Loft in Great Barrington. For more information, please see page ##.

In August, Alice Hoffman was interviewed by phone by the BJV’s Carol Goodman Kaufman, and shared insights about her new work and her career.

Interview by Carol Goodman Kaufman / Special to the BJV

Alice Hoffman is one of this country's most prolific authors, having published over 30 books since 1977. Her works include stand-alone novels, picture books, a play, and one nonfiction title.

In The World That We Knew, Hoffman blends the real and the fantastical in her tale about two young girls growing to adulthood while fighting to survive the Nazi death machine. Hanni Kohn, believing she has found a way to save her young daughter Lea's life, persuades rabbi's daughter Ettie to create a golem whose sole purpose is to protect Lea. But this figure molded from clay, whom they name Ava, is unlike any other golem in Jewish history. Ava develops human emotions, including a magical love, while she and Lea gradually learn to trust each other. The story follows Lea and Ava's travels in search of safety, and Ettie's courageous work bringing the desperate to safety over treacherous mountain passes.

In advance of her upcoming talk for the Federation, I had the opportunity to talk with her about both her newest novel and her writing life.

You are so prolific. How do you do it?

I've been writing since graduate school, so it's been a really long time. I don't really have a work schedule; I'm working all the time. I thought when I was in graduate school that I would write some of the time and then do something else. But, you know, it's not like that. If you're a writer, you write full time and you can't really make that decision.

So, it's not so much that you choose writing, but that writing chooses you?

You're quoted as having said that you are an escapist reader and writer. Can you share a little bit about what you mean by that?

I was a fanatical reader as a kid and as a young woman, and I just felt like it released me from my own life and was able to transport me. And I actually feel the same way about writing. I don't feel that I'm tied to reality or to the facts of my life. I'm not the kind of writer that writes about myself. It gives me a great deal of freedom.

Do you ever read non-fiction?

Yes. I read nonfiction all the time, especially when I'm working on historical books because I am doing research all the time.

Well, that brings me to my next question. What is your strategy for research prior to starting a book?

Well, what I usually do is become interested in certain topics, like strange circumstances. For The Dovekeepers I just so happened to be in Israel visiting my family, and I went to Masada and I had an extremely spiritual experience that I didn't expect. And then, as I was leaving, I saw a sign that there had been survivors, and that was something I'd never heard before. So when I came back I started reading everything I could find.

And what I usually do is I do rounds of research. I don't do everything at once. I do the initial research and then I start to write because I don't want to get waylaid by too many facts. I want it to feel like a novel. I want to create characters that feel like real people. And then I keep going back and forth and continually doing research while I'm writing.

The Dovekeepers was a huge project. I mean I really knew nothing. So you know it kind of took me to school.

Why now, after more than 30 books, did you decide to write a novel that takes place during the Holocaust – your new novel, The World That We Knew?

I had met a woman many years ago who wanted me to write her life story. I explained to her I don't write from reality, I don't write anybody's story, I don't write my own story and I don't feel like I have the right to write your story. But she explained to me that she had been a hidden child in France. I had never heard of that before. She had lived in a convent and she felt that if somebody didn't write her story then it would be forgotten.

And that really stayed with me because I had never been taught this in history lessons. And I started writing, and ever since that time I've been feeling more and more that, for me, it really echoes what's happening right now for us in our country.

The World That We Knew is look back at a horrible time in our history that doesn't change, except for one person, because of the acts of Ava.

My own personal interest was that I wanted to try to figure out how people survived this horribly dark time. And it was a great honor to be able to meet so many survivors, both in this country and in France, who are mostly in their 80s and 90s now who were children then. Truly, I didn't directly use any of their stories, just emotionally how their experience and the way they continue to live amazing lives and have families and continue on. They're extremely inspirational.

I think now the truly important thing is that we have to look at what's going on, which didn't happen in France for a very long time. People looked the other way or they didn't know what to do to stop what was happening, and what I didn't really understand was that it was both Jews and refugees. There was this huge fear of refugees and a huge amount of conflict and refugee propaganda at the time, and I feel like there's a lot of similarities to what's going on right now.

The World That We Knew joins the ranks of modern novels that feature golems. For example the Golem and the Jinni, Snow in August, The Amazing Adventures of Cavalier And Clay. Why now a story with a golem?

Well, I haven't read any of those books. My reference is the Yiddish folk tale. Why a golem? Well you know, I don't know. She sort of just appeared. I felt like in order for me to write this dark period of time I'd have to write about it from another perspective. I didn't want to write about it as a realistic novel. I felt like it's been done and done and done, and also this was place that I come from. I was really influenced by my grandmother's stories.

Do you see the golem as the prototypical superhero? The reason I ask is that there are so many Jewish superhero cartoonists: Stan Lee, Jack Kirby, Gil Kane, Bill Finger. They write about superheroes and they're Jewish. Do you see a relationship between the golem and the superhero, and do you think that as Jews do we need a golem right now?

I went to France and then through Switzerland, and at the very end of the trip, my driver took me to this place where Mary Shelley wrote Frankenstein. And I rang the bell and the housekeeper let me wander around, and I realize now that that was the perfect end to the visit because there's so much about the golem and so much using the legend of the golem in what I create.

But I wanted to do something really different. I wanted to write about a golem that a woman would create.

In addition to including the golem in this story, you use a lot of magical realism in otherwise realistic stories, creating characters whose stories are shaped by fantasy. Why?

I think we're always influenced by what we read as children. I read a lot of fairy tales and read a lot of magic. My grandmother told me a lot of stories about her Russian childhood, and so I was very influenced by that. I also think that magic is the oldest form of literature. So it just came naturally to me.

Are you working on something new now or are you taking a break?

I've just picked up The Rules of Magic. Should I wait for the new book in order to read the story in order?

You can read them in any order. It doesn't matter.

Cost: $11 with fresh buffet lunch. Free admission to program only.

Advance lunch reservations and prepayment required for this event.