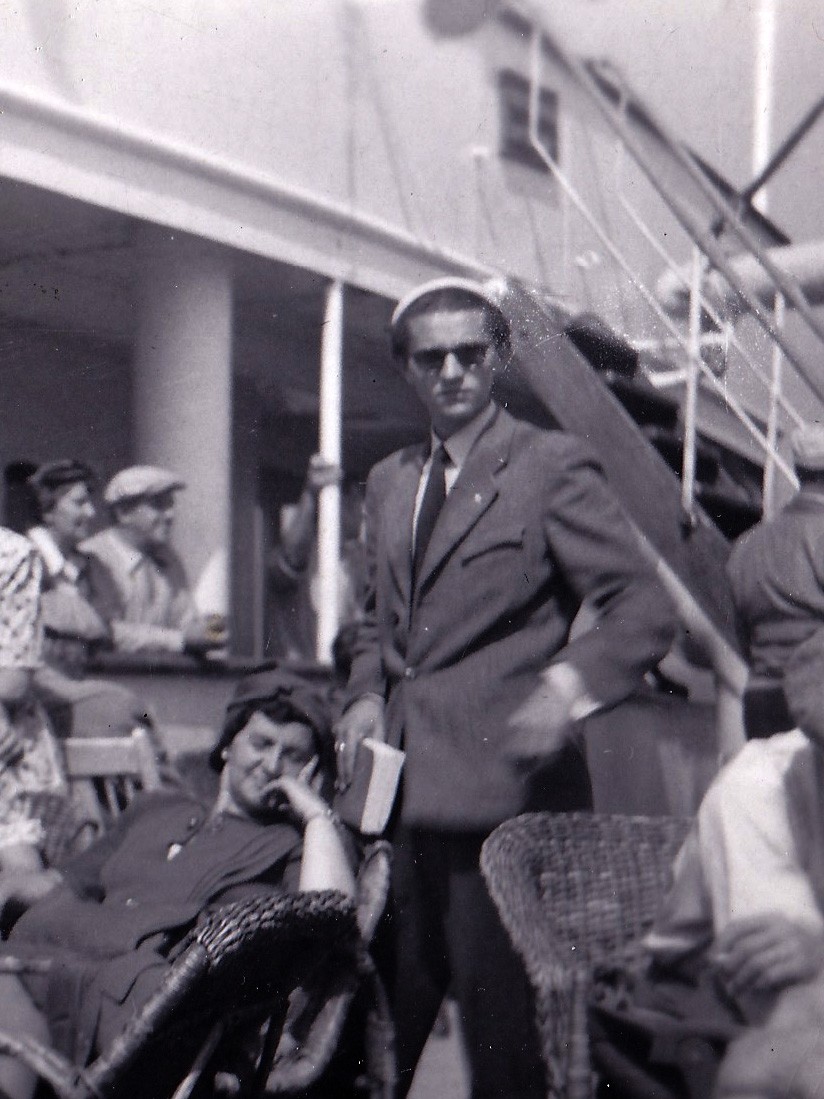 By Leo Goldberger / Special to the BJV

Leaving Scandinavia in 1947 for a new life across the Atlantic was quite a momentous experience. My father had decided that he had had enough of wars – not to mention the unspeakable Holocaust – having lost almost all of his family in the former Austro-Hungarian realms and then fearing the expanding Soviet hegemony. America beckoned as the most enticing destination to consider, if not also the safest for his four growing children, I at seventeen among them.

My dad, an opera-trained singer and also a cantor in Copenhagen, had received a six-month fellowship to study “advances in liturgical music” in the USA in 1947. His only close contact in New York was the former organist at Jewish funerals, Borge Rosenbaum. A totally unknown comedic pianist arriving in the USA in 1940 after the German occupation of Denmark, Rosenbaum was asked to change his name to Victor Borge when he quickly became a hit as the “warm-up” performer on the Bing Crosby Radio Show. (Borge had been on Hitler’s most wanted list because he poked fun of the Fuhrer in his many cabaret shows in Scandinavia.) It was Borge who helped arrange a performance at The Town Hall concert hall on 43rd Street for my dad, after which he was offered an attractive position as chief cantor in Montreal, Canada. After transatlantic phone calls with my mother and an okay from his Danish congregation the decision was cemented.

All I knew of Canada came from a couple of pages in my Danish geography book. (My dad had jokingly referred to Canada’s name as “keiner dah,” meaning “none there!” in German. He was struck by Canada’s tiny population of just 10 million in a landmass much larger than the USA.) The extent of my knowledge was that Montreal was the second-largest French-speaking city in the world and that Canada was a dominion of the UK where one was required to sing “God Save The King” after the last movie.

In late 1947, my mother, two younger brothers, and I sailed to New York aboard the Swedish ocean liner SS Drottningholm from Gothenburg. This was an unforgettable experience. We traveled first class as everything else was booked, and thus we ate at the captain’s table, wearing the required formal attire and hobnobbing with, among others, the sister of New York’s Mayor William O’Dwyer and the celebrated Swedish film star Edvard Persson, who was working on a film sequence on the boat. Even Greta Garbo was aboard – though rarely seen as she wanted famously “to be left alone,” with her meals brought to her cabin.

After a few days aboard, enjoying the pool and nightly dancing, a rather awkward situation occurred when my mother observed a young woman who seemed visibly anxious and ill at ease. The woman continually wore the same clothes and ill-fitting kerchief and kept moving from one place to another. My mother approached her after several days and learned that she was an 18-year-old, Orthodox Jewish, “displaced” Holocaust survivor – and a stowaway! She spoke only Hungarian, which my Hungarian-born mother did as well. At my dear mother’s suggestion, we began a routine to provide the young woman with daily food (hidden in a napkin from our luxurious dinners). My mother also suggested that she sleep on the floor near my bed, which was safer than roaming around at night, hiding here and there. Surely not my ideal bedfellow!

And then … days later came the much anticipated, wonderful sight – the Statue of Liberty – as we rounded a corner along the Hudson River to dock on 56th Street. There, joyfully, we were met by my father after some nine months of separation.

However, less joyful was the unfortunate fate of our young Hungarian stowaway. Walking down the gangplank and closely intermingled with us, she was nevertheless noticed by a guard at the base of the gangplank steps. She failed to produce the required landing pass. Thus the game was up for her! We notified the Hebrew Immigration Aid Society (HIAS) representative at the landing site to possibly help her. Yet she was taken to Ellis Island … and presumably deported back to the Displaced Persons camp in Vienna.

Epilogue: Some 15 years later, the former stowaway appeared at our home in Montreal. She was married with a child and living happily in Brooklyn. She came to convey her thanks! Quite a wonderful ending!

Leo Goldberger, who resides at Kimball Farms in Lenox, is a psychologist, author, and editor known for his work in sensory deprivation, personality, stress, and coping, as well as for his writings on the rescue of the Danish Jews during the Holocaust. A professor emeritus of psychology at New York University, Goldberger is a former director of its Research Center for Mental Health. In 1993, he was awarded The Order of Dannebrog (Knight's Cross) by Queen Margrethe II of Denmark.

The photo above shows Dr. Goldberger, with his mother Ilona and other refugees, aboard the SS Drottningholm in 1947.