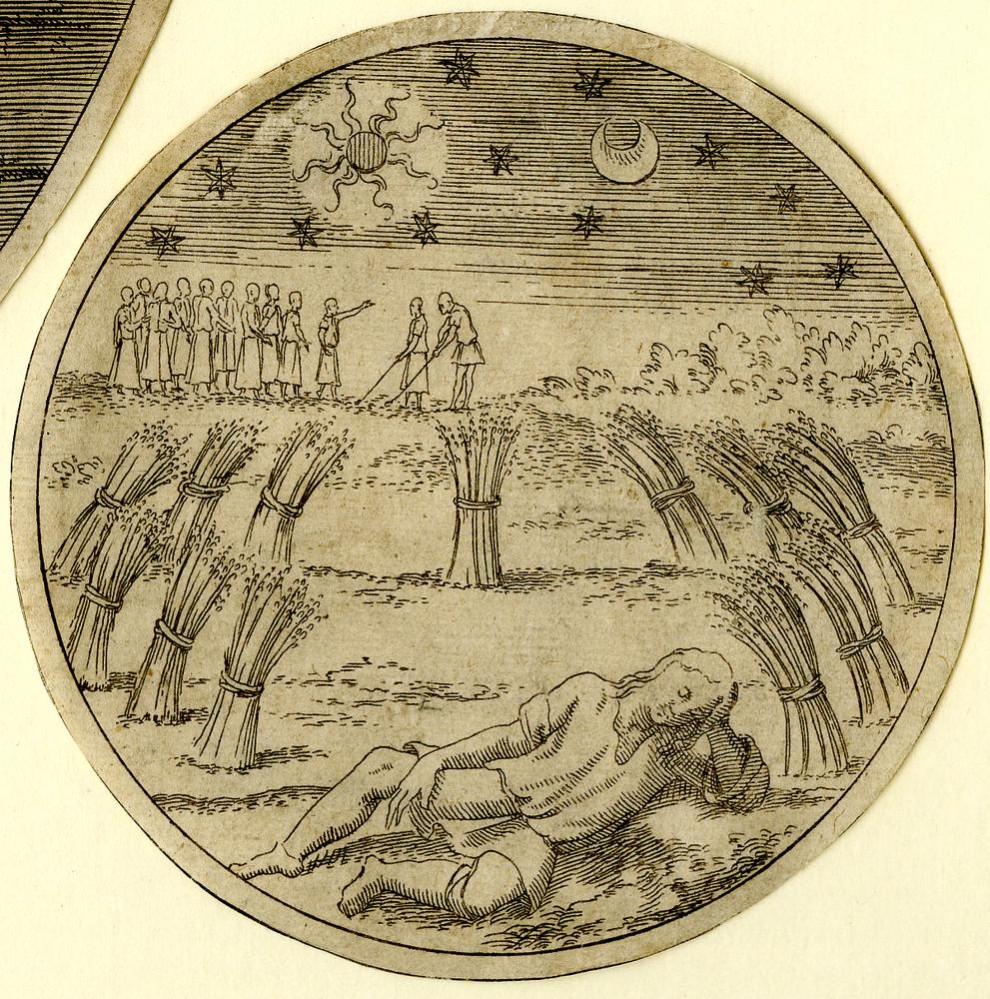 “Listen to this dream I had:  We were binding sheaves of grain out in the field when suddenly my sheaf rose and stood upright, while your sheaves gathered around mine and bowed down to it.” (Genesis 37:6-7)

While wheat may seem to be a rather boring food to write about — it’s not sweet and luscious like the date, or “in” like the pomegranate — it is such an important part of our ancestors’ diet that it’s mentioned at least 39 times in the Tanach. And our guy Joseph certainly spent a lot of time thinking about it, both in interpreting his own dreams and those of the Pharaoh for whom he worked.

One of the world’s earliest cultivated grains, wheat was well known in the ancient Land of Israel. Parched grains at were used for food, perhaps much as we eat popcorn today (Ruth 2:14; 1 Samuel 17:17; 2 Samuel 17:28). And wheat was such an important part of the economy that the festival of Shavuot, also known as the Day of the First-Fruits Offering, commemorates bringing the first of the wheat harvest to the Temple as an offering to God.

Wheat hasn’t been ours alone, for sure. For millennia, wheat has served as a basic foundation of both the human and animal diet. We know this because archaeologists have unearthed fragments of ancient wheat at digs in eastern Iraq, dating back 9,000 years and at different sites in Egypt’s Nile Valley around 5000 BCE, not to mention digs in Syria, Turkey, and Jordan. Even today, wheat supplies between 20 and 30 percent of the food calories for people around the world.

Wheat, a member of the genus Triticum is actually the product of a cross between three different grass species that experts believe come about over 10,000 years ago. It grows on more land on Earth than any other crop — in 128 countries, including Israel — second only to rice and corn, probably because it can adapt to difficult growing environments.

Although wheat was a staple grain in the East for millennia, until the 15th century, when explorer Christopher Columbus landed in the West Indies, it was unknown by the natives of the New World. Spanish explorers brought the grain to Mexico just a few decades later, expanding its reach. However, not until 1602 did Americans begin cultivating wheat, and they did it right here in Massachusetts, on Martha’s Vineyard. Almost two hundred years later, colonists, including one by the name of George Washington, added wheat to their farm acreage. Then, in the late 19th century, almost 350 years after Columbus landed, Mennonite immigrants from Russia brought a variety of wheat seeds called Turkey Red to Kansas, where they harvested the first crop at the Shawnee Methodist Mission. Turkey Red is now the primary wheat variety grown in the Central Plains of the U.S

Of course, we no longer eat wheat straight from the field. It has to be processed, and the result of that process is flour. Wheat flour has probably been used more than any other grain as the main ingredient in bread. In fact, London’s Petrie Museum features an exhibit of various Egyptian food products, including 3,500-year-old bread loaves made of wheat. But it is also used in foods ranging from pasta to pastry, crackers to crumpets.

Bread is such an important food throughout history and with so many peoples that it has rightfully earned the sobriquet “the staff of life.” And “breaking bread” with others is so ingrained in our social life and culture that the current pandemic quarantine has us Zooming and Skyping and FaceTiming our meals with family and friends.

In Jewish tradition, the word “kemach,” flour, is used to denote food. Pirkei Avot, the Sayings of the Fathers, goes so far as to state, “Im ayn kemach ayn Torah; im ayn Torah ayn kemach,” translated as, “If there is no food, then there is no Torah; and if there is no Torah, no food.” The rabbis meant that if there is no sustenance to support our physical being, then it is impossible for us to absorb the words of Torah. Conversely, if we have no spirituality from Torah in our lives, then our souls are starved. Research about children’s learning correlated with having a good breakfast seems to support the adage.

What makes wheat flour unique is that it contains gluten, the protein that enables a dough to rise by forming carbon dioxide during fermentation, thus producing light and fluffy bread. (And just FYI, if you’re baking with whole wheat flour, be aware of the lower gluten count. Your bread will be denser and somewhat drier.)

It’s the gluten that can cause problems of another sort, particularly among Ashkenazi Jews. But despite the prevalence of celiac disease and gluten intolerance for some, wheat-based breads are still basic items on our daily menu. From bagels to bialys to boulou, the variety of breads our Tribe offers is vast and delicious.

The majority of Iraq’s Jewish population arrived in Israel following the establishment of the state, and they brought with them laffa, a bread that can best be described as being a softer, pocketless pita bread. You can use the slightly chewy Iraqi flatbread as a wrap for your shwarma, for scooping up your baba, or soaking up the sauce in your shakshouka.

While laffa is traditionally baked in a taboon, a clay-walled, wood-fired oven, I suspect that most of us don’t actually own one. I certainly don’t. But you can still get good results in your home oven with either a pizza stone or an upside-down cookie sheet heated in a very hot oven

In the bowl of a food processor, add in the following order: water, olive oil, salt, flour, sugar, yeast. Take care not to let the salt anywhere near the yeast!

Set to the dough setting and press start.

When the dough cycle has completed, or when the dough has doubled in size, turn out onto a floured work surface.

With well-floured hands, divide the dough into 8 equal pieces.

Make a circle with your thumb and middle finger and push each piece through, making a ball. (Yes, this really works.)

Cover the dough balls with a towel and let rise again until almost doubled, 20-30 minutes, depending on the weather.

Set the temperature to 500° F — or as hot as your oven goes. When the bell rings, place the pizza stones or 2 upside down cookie sheets into the oven and allow to heat for about 10 minutes.

On a well-floured surface, roll each dough ball into a thin 8- to 10-inch round. Prick all over with a fork.

Quickly transfer 1 or 2 pieces of shaped dough onto each baking sheet or stone, depending on their size.

Bake for 4 to 6 minutes, or until the laffa begins to turn golden brown in spots.

Remove the baked laffa from the oven with tongs, transfer to a platter, and cover with a towel to keep the laffa warm and allow it to steam slightly.

Repeat with the rest of the dough.

Reheat the foil-wrapped laffa before serving.