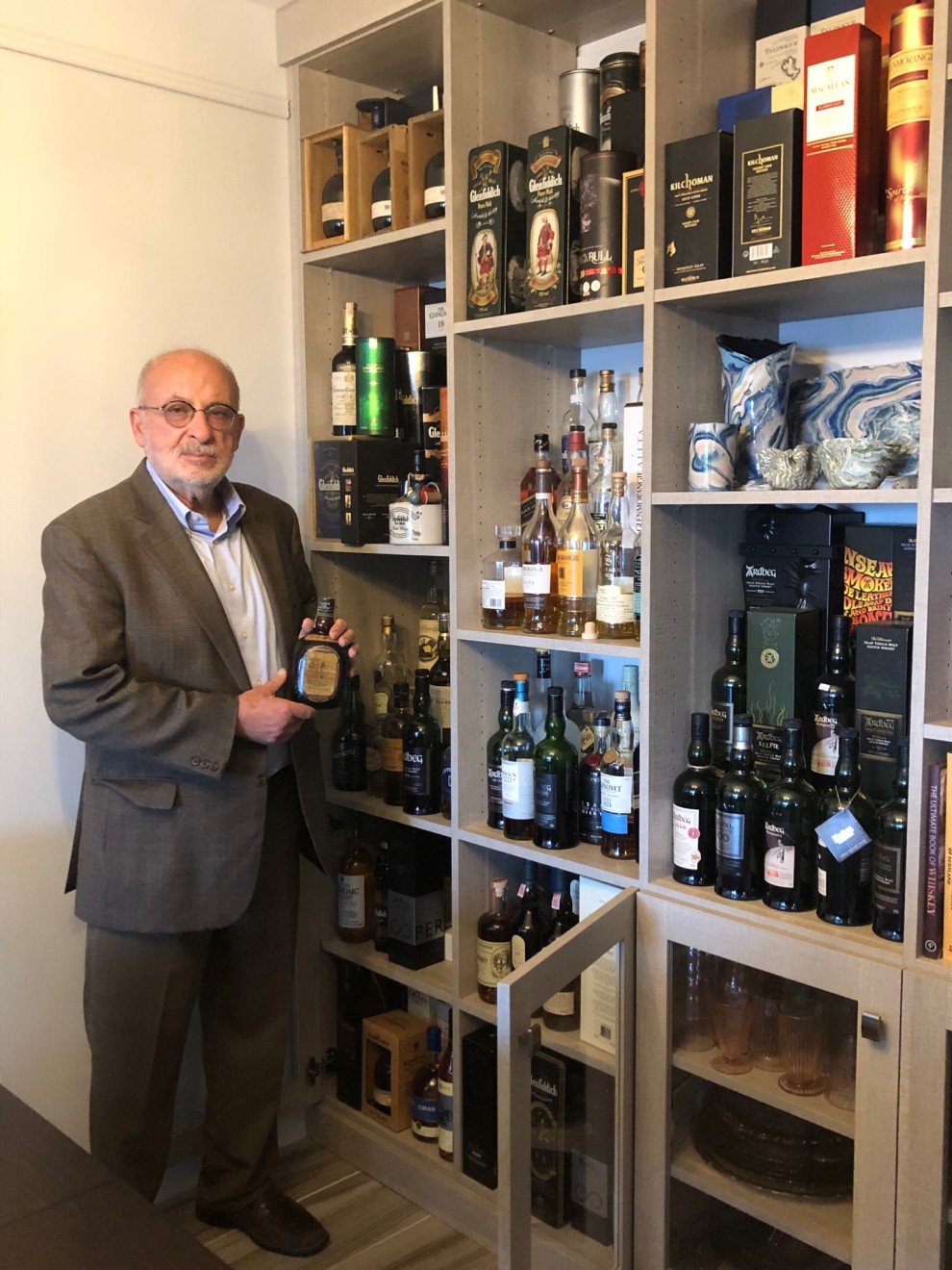 The much-anticipated Berkshire Hills Hadassah Men’s Association’s Scotch whisky tasting fundraiser featuring premium 18-year single malts and the introduction of the very first single malt whisky distilled in Israel is just around the corner – July 28 at 5 p.m. at the Hilton Garden Inn in Lenox. Speaking will be Charles Tower (“Old Man Whisky”), a scotch authority, ambassador, and speaker for over 30 years.

The event will benefit the National Associates’ Men’s Health Initiative for Alzheimer’s Disease and will feature comparative tastings of five different 18 year old single malt scotches, and the introduction to the Berkshires of the first single malt whisky prepared and distilled in Israel, Milk and Honey Single Malt Whisky. The cost of this event is $54, though contributions at the following levels will be appreciated: Underwriter ($108), Patron ($180), and Benefactor ($360), admission included.

One of the organizers of the event, Alex Rosenblum, a year-round second-home resident of the Berkshires for almost 30 years, reflected on his personal scotch odyssey and the surprising involvement of the Jewish community with whisky.

My first memory of whisky involves my father, a survivor of Auschwitz, raising a glass of “bronfn” at my bar mitzvah party held in our apartment in Montreal almost six decades ago. Waving his glass in the middle of the small, tight-knit survivor community, my father pointed to me, standing at the periphery with the other children, and whispered loudly, “Iber-gehlebt” (Survived!), paused for a brief moment and shouted “L’chayim.”

Later that evening, after the several dozen guests had left – and still glowing in the moment of being bar mitzvahed and becoming a man – I recalled tiptoeing over to the bar table and gingerly pouring myself a shot of whisky. Imitating my father’s friends to the best of my ability, I quickly swallowed the shot with one gulp. Though choking and gasping for air, I could still hear my mother’s screams of concern and anger, intermingled with my father’s laughter. My father smacked me in the back and then whispered in Yiddish that I was a man now, but still had to wait until I grew up. Then he admonished me: “A Yid drinkt nisht aleyn (A person should not drink alone)”.

My aversion for whisky lasted for about 15 years, until my second year of law school when I worked on Chuck Schumer’s first congressional campaign. After the electoral victory, then US Representative Schumer helped me get an internship with a relative of his who had a general legal practice in Manhattan. My boss, called Moish by everyone, was a brilliant attorney and CPA who always seemed harassed, annoyed, angry, and resigned all at the same time as he plowed through endless stacks of legal papers, juggled numerous clients over the phone, and prepared for the next court appearance.

Yet every Friday, Moish would close the office a bit early and drag me down to a beautiful old bar called Suerkan’s in lower Manhattan. Moish would order two Chivas Regal scotches and “encouraged” me in joining him in slowly sipping and savoring a good whisky to celebrate his survival of another week in a law practice. When I asked him why we had to celebrate with a scotch, he was informed in no uncertain terms, “Kid, a lawyer drinks scotch!”

As a result of these early hilarious (or perhaps traumatic) early experiences, for the last 40 years I have been guided by these two lessons – a Jew should not drink alone and a lawyer must drink scotch.

Over the years, my love and intrigue for a good single malt scotch has become a hobby which I have been able to share with my wife, friends, and community. I’ve traveled to Scotland several times and have attended numerous tastings and seminars in the United States, England, and Scotland. Over the course of the last several decades, I collected over four hundred single malt scotches, some of which date back to the 1940s through the 1980s. I’ve also organized scotch tastings and have given presentations on the Jewish connection to Scotch whisky and the kashrut issue relating to whisky.

Especially fascinating is how scotch and Kiddush clubs have become both part of and an issue in the North American Jewish community. One observer recently noted that at large whisky tastings in several large cities, kippot far outnumbers kilts. I see distilleries and bottlers courting and targeting Jewish customers. On any given Shabbat in the Berkshires and through North America, services in many synagogues will be regularly followed by a Kiddush and the pouring of a single malt whisky.

But recently, the (over)consumption of whisky at Kiddush clubs has been challenged. One well-known rabbi observed that Kiddush clubs used to add to the joy of the social aspect of synagogue services and helped in attendance at synagogues, but now at a questionable cost. Noting the diminution of shul spirituality, questionable behavior by some, and interruption of service, the Orthodox Union and many Conservative synagogues individually have recommended and implemented a limitation on Kiddush clubs.

In my own experience in my Brooklyn synagogue, the rabbi was at first receptive to the camaraderie and influx of some members when we first instituted Kiddush clubs as part of the Shabbat morning experience, but the positive factors of a Kiddush club were soon tainted by the distraction and the disruption of watching a few men slink out of the sanctuary during the reading of the haftarah to imbibe. Rather than embracing the message of our prophets in the haftarah, some men preferred imbibing and downing shots of whisky in the back rooms of the synagogue. Rabbis and leaders have taken note and many have recommended that whisky drinking be, at best, only a part of a social Kiddush and only after services, or at an occasional social gathering.

Most fascinating to me is how the social consumption of a good scotch has become a religious issue for many in the Orthodox and traditional Jewish community. I first became aware of the dilemma of kashrut over a dozen years ago when I mentioned to a friend, who considered himself Modern Orthodox, that several distilleries in Scotland were courting the exploding Jewish market by exploring the feasibility of “hechsher” (kosher certification). To my surprise, my friend was quite upset because, as he explained, that up to recently the kashrut of a particular scotch was a personal decision. Once a bottle received a “hechsher,” the kashrut of the majority of scotch bottles all of which did not have a “hechsher” became more suspect and open to questions for further discussion, analysis, and debate.

As both an attorney and a self-defined traditional Jew, I am intrigued by the debate over the kashrut of scotch. More and more single malt scotches are being aged in oak barrels which previously held non-kosher wine, sherry, or port. Religious authorities in the United Kingdom and some Canadian beth dins (religious courts) and a minority in the United States find acceptable from a kashrut perspective the consumption of Scotch whisky. They cite Talmudic authorities such as the Shulchan Aruch, the most widely-consulted 16th century Code of Jewish Law, and Rav Moshe Feinstein, arguably the most respected Talmudic authority in 20th century America, for the proposition that the tiny amount of non-kosher wine previously aged in the same oak barrels then used to age scotch is insignificant and does not render the scotch suspect and not kosher. (See the laws of Batil V’shishim- a minute amount of traif [1/60th or less] doesn’t render a product non-kosher.)

But many Orthodox beth dins in Canada and a majority in the United States, and kashrut authorities such as the Star-K and the CRC Chicago Rabbinical Council, in many cases using their own interpretation of rabbinic responsa, rule that the wine/sherry/port content in some of the ageing barrels subsequently used to age whisky, even though very small, does contribute to the taste directly, thus rendering the whisky unacceptable.

I always like to tell the story that after Rav Feinstein had issued his responsa that found scotch to be probably kosher, he then stated that a truly observant Jew should show caution and probably avoid drinking whisky previously aged in wine barrels. He then paused, and admitted that on occasion he drank such a whisky, especially when someone made a L’Chayim. After all, he reasoned, one must assume that a L’Chayim is for a good thing, and a good thing for the Jewish people carries more weight than some doubt about your good whisky.

The Berkshire Hills Hadassah Men’s Association committee (Dr. Stuart Masters, Michael Albert, Allen Rosenblatt, and myself) are working to make the July 28 tasting a stimulating and enjoyable program. We welcome those anyone interested in learning more about Scotch whisky while supporting a good cause in the National Associates’ Men’s Health Initiative for Alzheimer’s Disease.