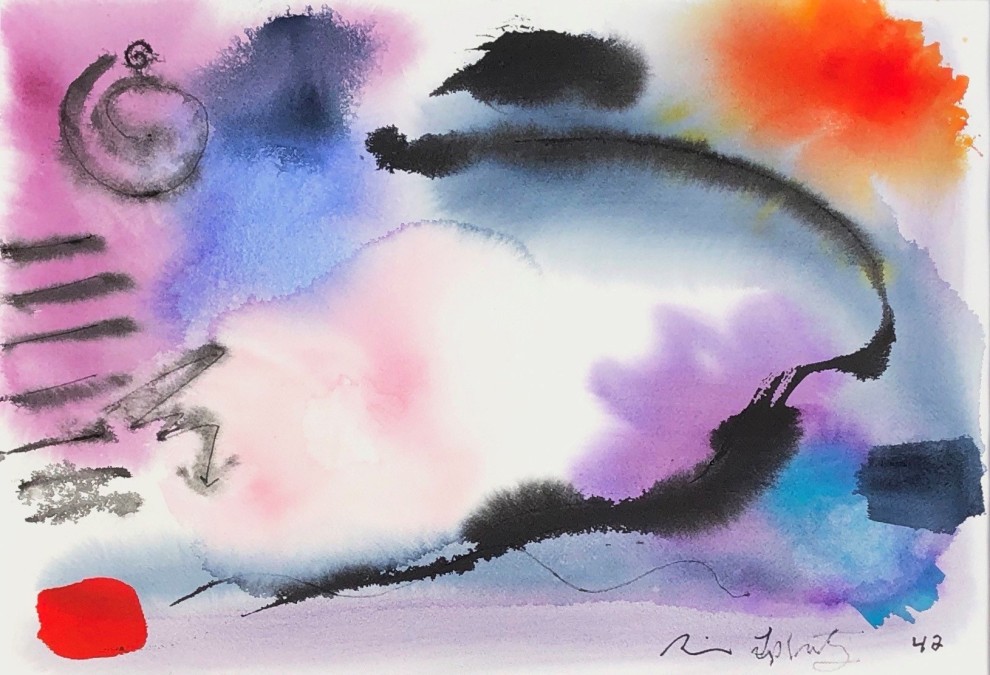 “What I can do is enough, as long as it is done with intention…”: Nina Lipkowitz on her coronavirus-year series of bold and introspective watercolors

In the months before the coronavirus pandemic shutdowns, Great Barrington’s Nina Lipkowitz and her husband, John, were actively pursuing their passions as peripatetic travelers and creators of art – John is a photographer, while Nina goes through phases with media and subject matter. In the first phase of her career, she worked as a potter. When she was first featured in the BJV back in 2016, she was primarily producing sensuous watercolors of flowers from her garden and eye-popping abstract compositions on her iPad. When we circled back with her in 2018, she was working autobiographically, exploring her father’s traumatic World War II service and its effect on her family, working with photo transfer and acrylic paints on canvas.

I asked Nina where she was at before the pandemic changed everything. She told me that she and John had been traveling in New Mexico and Ireland. Artistically, she had been inspired by people she met on those trips to paint portraits – “straight painting” using acrylic paints, something she says she’d never really done seriously before.

Nina’s home studio was filled with portraits in this vein for a scheduled exhibition, “and then, you know, March 13th” – the day President Trump declared the COVID-19 pandemic a national emergency.  “John and I personally shut down and said, okay, this thing is real. And I didn’t do anything artistically –or actually in any way – because I was in absolute terror.”

Nina says she got back to work on April 6th, the day she joined the Jewish Studio Project. Its participants immerse themselves in what, according to the group’s website, is “a unique methodology (the Jewish Studio Process) that combines creative practices from the field of art therapy with Jewish learning techniques, and spiritual community building.” At the first session, the young Philadelphia-area Reconstructionist Rabbi Rebecca Richman prompted Nina’s group to summon memories, sensations, and emotions to stimulate the creative process. Says Nina: “I wrote: ‘Time is confounding in this moment. Practice letting go of control. What I can do is enough, as long as it’s done with intention.’ And that basically was Day One of me starting to paint.”

Nina says she started the process by working in other artists’ styles, following their paths, copying their images, and absorbing their techniques. But as she continued to work with Rabbi Richman – and after what she describes as a powerful virtual Reiki session with her friend, David Holley –  what started to pour out of her was a series of abstract watercolor paintings that bear some resemblance to her iPad images, but that possess an added depth, richness, and mystery that is informed by her emotional response to what the pandemic has wrought.

Part of the Jewish Art Project program involved the study of liturgy. Participants grappled with verses from the Hallel – “From the narrow place I call out to God, who answered me with the divine expanse” (Psalm 118, ‘Min ha’metzar…’) – that reflect how our ancestors confronted the challenge of their own lives narrowing. Nina says she immersed herself in the text study, but what she started to produce was “not connected to a verse or to religion or anything in an intellectual way. [The paintings] were just my guts coming out.”

Over a period of months, Nina completed one painting a day, each one numbered rather than named, and kept a journal of how she felt and what was on her mind one day of its creation. She started each entry, however, by writing: ‘I am fully present.’ “I write that down as my intention for whatever it is I’m doing,” she says, “so I have no idea of what’s to come.”

As late winter turned into spring, Nina says she felt restless and started to leave the confines of home in order to explore the outdoors. Walking with a trainer, she discovered Berkshire hiking trails she had never traversed, and the experience transformed not only her physical wellbeing, but also her perspective.

“This is a time of expansion and contraction,” she realized. “So my life contracted, but then there was this enormous expansion art-wise and also being out in nature. And they don’t reflect each other. I saw that my world was contracting because I couldn’t do what I had always done, and we couldn’t travel and I couldn’t see people – I mean, our kids didn’t come for five months. It was just John and me and the synagogue (Hevreh of Southern Berkshire), thank God, and the painting program, thank God, and then the hiking. Our lives were very contracted, but in a lot of ways, it expanded into places I never been before. I’ve never painted like this.”

The early part of the process “was very freeing. I loved the colors I was using and was just having a blast.” She adds: “My studio has windows. So I look outside and see my garden. But I was never inspired to paint flowers or even the colors of the garden that once might have inspired me. I am more inspired by what the colors of my paint and my ink do when they hit the paper. It was almost like the material was driving me more than anything inside my head.

“But my energy moves in spirals, and there were no spirals” in those early works, says Nina. As spring turned to summer, however, the spirals began to appear in her paintings, and as summer gave way to fall – and the High Holy Days – “my spirals went more into circles. They stopped being open.”

Nina says she felt she missed the runup to the holidays, a time she would have been rehearsing with the Hevreh choir, an absence that left her feeling “bereft.” She missed the connections with other people she would customarily have from Rosh Hashanah through Yom Kippur, as well as the personal and spiritual journey culminating with the closing of the gates at the end of the Day of Atonement.

And as fall has now changed into winter, Nina says she is beginning to feel that the burst of creative energy that birthed the abstract watercolors ebbing. She’s experimenting with new materials and new ideas, and has already exhibited some of her 2020 paintings in a show over the summer. Now, she says, she’s able to consider the substantial body of work she created in response to the pandemic in the way a musician might listen to a recording of their music, “looking at it a different way than as the person who created it.”

Leaving 2020 behind and moving into the uncertain months ahead, Nina says: “It would be real easy for me to stop right now. And I’m not going to, because part of this COVID thing, part of what saved me, is that I can go and make art whenever I want. You know, when other people might be saying, ‘I can’t do this, I can’t do that…’ I don’t want to start watching movies all winter. It’s really important for me to keep my creativity going.”

Postscript: Nina writes that she has a new show opening in Hudson, NY at the 510 Warren Street Gallery. It will run from January 1 to 31, 2021. As for her progress through what the article describes as an ebbing of her creative flow, she writes: "By the way - I didn’t slow down or change material. I plowed through that slower quieter time and burst out the other side with even more energy, much to my relief. Can’t wait to see what my work looks like in two years when we should circle back and do another interview. Lol -Of course I don’t know where you’ll be but all things being equal, I’ll be right here."