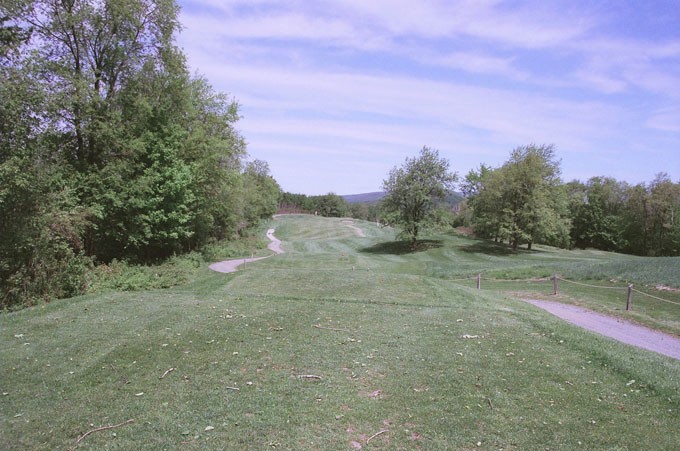 One of the great pleasures of the cockamamie summer of 2020 was that my son and I were able to play a lot of golf together. Eliot was experiencing the early terrible teens (he turned 14 in August) and we had been going at it for months, him and me – nothing beyond what can be reasonably expected at his age, but mighty painful nonetheless. On the golf course, however, we were cool.

It was nice to be playing golf at all – I had been on a five-year hiatus, more or less, due to a prolonged period of being unwell. Before I understood that I was sick, my golf game got royally screwed up – I went from being a respectable golfer looking to break 90 to a bewildered hacker who could not make a decent swing or sink a putt. That mysterious and utter regression became snarled up with emotions associated with my illness, and it got so bad that I didn’t even try to golf for three years after my recovery, save for a few dismal experiences on the driving range that only reinforced the futility.

The shame of that was that golfing had been a passion and golfing with Eliot one of my joys, particularly in late summer and autumn when the courses empty out and the Berkshires seem dreamlike. I started by teeing him up at the 100-yard marker when he was six and then moving progressively back 50 yards as he got older. He was just hitting off the women’s tees when we stopped.

Things were different when we resumed in June. For one, Eliot is now a teenager – he’s on the small side and slender, but intensely athletic. Without instruction, he was smacking the ball straight and long. He started the season on the senior tees, but I expected he’d be hitting with me off the white tees by September.

After taking a lesson that straightened some things out, I practiced better and played a round with Eliot in which I played decently, hitting long drives and crisp iron shots. Next time out, however, something in my mind clicked in a bad way and I immediately reverted to my wretched ways, my game in total collapse. “You can talk to a fade,” Lee Trevino famously observed, “but a hook won’t listen.” True. On my backswing, I felt as if my hands were losing their connection to the club, and I compensated by squeezing hard, turning the clubface, and yanking the ball left – the dreaded “duck hook.”

Metaphorically, I was losing my grip on lots of things in the summer of 2020, but on the golf course, it was literally so. Metaphorically, I was able to put a good face on things, but on the golf course, my psychological tumult was literally all out in the open. I wasn’t playing golf so much as having a succession of 18-hole mental breakdowns in front of my son and golfing buddies, interspersed with traumatic practice sessions that compounded my frustration. To get an idea of what it was like, imagine archaeologists excavating a Qumran cave discovering a lost chapter of The Book of Job in which Job takes a break from scratching his festering boils with a potsherd and goes out golfing with his pals Eliphaz the Temanite, Bildad the Shuhite, and Zophar the Naamathite.

Then, the darkness lifted. I happened to catch a pro golfer on TV talking about how he solved his hook (put more weight on the back leg), which reminded me of a swing fix I had forgotten about during my five-year hiatus from the game (make a chopping motion at the ball while keeping your hands still). Applying the fix on the range, I practiced well a couple of times, and then took it out to Skyline Country Club in Lanesborough with Eliot and my buddy, Howard Cooper.

A strange thing – I played three holes with typical hopelessness and then, on the fourth tee, took a deep breath and told myself to commit to the fix. Trusting it, I hit a beautiful 5-iron shot into the short par 4 – the ball couldn’t have been more perfectly positioned if I had placed it on the fairway. I made a similarly pure swing with a pitching wedge to the green, then putted twice for a par.

It really meant something to me that Eliot had witnessed this miraculous transformation. Not because I imagined him thinking something like, ‘Oh, maybe Dad isn’t such a shmendrick after all,’ because I knew that where he was at, a few weeks shy of his fourteenth birthday, I was such a shmendrick – in fact, the biggest. What pleased me was that he was able to observe firsthand how fragile and powerful the human mind can be, how unruly and yet tamable are our psyches, and how heavy mental shackles can be slipped in an instant via a flash of insight and one decisive action. Sometimes it happens when you let go and let God, sometimes it happens when you let go and let golf, but then suddenly, everything is different.

What also meant something is how, despite our recent tussles, he was clearly happy for me, palpably relieved that I had stopped struggling – not that he actually said anything about it, or even mentioned the change in my game. But by my lights, compassion and a guyish laconic manner are both positive traits.

In the weeks that followed, Eliot and I continued to practice and play together, both of us improving. Then, in late August, he said: “Dad, I’m hitting my drives as long as yours.”

“No, Eliot, no – I don’t have to look at the yardage markers,” I said, “You aren’t hitting your drives as far as mine. But because you’re talking sh**e, next time we play, you’re going off the white tees with me.”

So the next day, we went off the white tees at Skyline – Eliot has not developed a short game and his putting is abysmal, but tee to green, he was hitting it really well, though not as far as me.

We arrived at the 13th hole, a short par 4 of 320 yards with a skinny fairway and out of bounds all along the left-hand side. It has always fit my eye.

Eliot teed it up first. Hit it solid and straight, though from the tee, we couldn’t see where it stopped. I told him it was his best drive of the day.

I teed my ball up and got absolutely all of it. Right down the middle.

“You smoked it,” Eliot said.

“Dad! You SMOKED it!” he exclaimed, incredulous that after months of seeing me rail in anguish after hitting duck hook after duck hook 80-yards into thick brush, he had to listen to his anhedonic shmendrick father gibber about losing a few yards on a perfect drive.

We walked up the fairway together. My ball was maybe 40 yards from the green, which meant my drive went about 275 yards or so, a big hit for me. I looked for Eliot’s ball 40 or 50 yards behind mine, but didn’t see it. I asked if he did.

We walked up to the ball. It was his. My ball was about 15 yards to the right of his, and after a minute or so of lively disputation about angles and planes and favorable bounces off cart paths, I had to concede that while I’d hit my drive a beastlike 275 yards, he’d hit his 275 yards and 4 feet.

So what is my point in sharing all this? I have two, actually.

Point one: If my ball hadn’t been so unlucky –  no, so unjustly unlucky – to have hit that minuscule hump in the fairway and kicked right, I would have outdriven the little thug by 5 yards easy. And I would also like to mention that I was the only one of us who ended up parring the hole. Should have birdied it, too.

Point two: Watching your kid grow up is a beautiful thing, isn’t it? Fourteen years of loving my boy. I remember how I used to tee up his golf balls at the 100-yard marker.