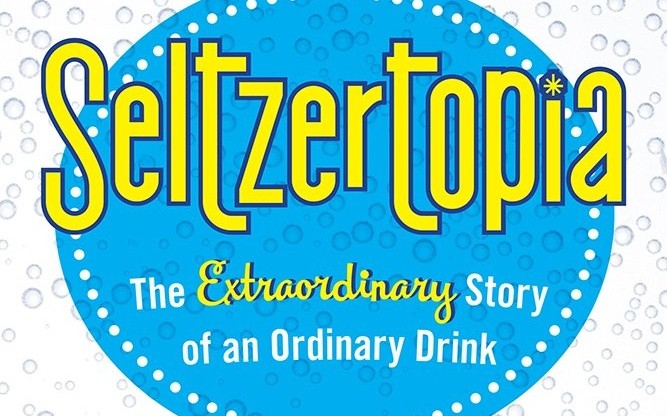 By Avi Dresner / Special to the BJV

The subtitle of Barry Joseph’s, Seltzertopia, is The Extraordinary Story of an Ordinary Drink, and the book definitely lives up to that title. There is nothing two cents plain about this story, which is frequently as effervescent as its subject matter.

The book grew out of an article Joseph wrote for The Forward newspaper in 2004 about the home seltzer maker, SodaStream, which turns tap water into seltzer. Not coincidentally, Joseph’s most recent article in The Forward also has to do with seltzer, in this case (pun intended) recounting how seltzer helped win Israel’s War of Independence.

Joseph’s original article is reproduced in its entirety in the book’s prologue, and features the following quote from a SodaStream ad: “Matzo, circa 1440 B.C. Chicken Soup, circa 1280 A.D. Homemade Seltzer, 2004.” One might add Joseph’s book to this list of accomplishments.  It took him over ten years to write it, and it’s not hard to see why given his painstaking research into seltzer’s evolution from naturally carbonated spring water bubbling up through the earth’s crust to its pride of place on modern tables, especially - though not exclusively - Jewish ones.

The book is divided into three main parts, and features chapters entitled “How Seltzer Got Religion,” which explores the inextricable connection between seltzer and the Jews; “The Birth Of A Modern Seltzer Man”; “How Seltzer Got Funny,” which traces its use in comedy from The Three Stooges to Clarabell the Clown to The Simpsons; and “How Seltzer Got Its Groove Back,” which makes the case that seltzer is now more popular than ever, even if its case is now cardboard and not wood, and its bottles are plastic and not glass. In between, Joseph takes the reader on some fascinating detours spanning the universe of seltzertopia.

The main recurring framing device that Joseph employs to help tell the story of seltzer is to look at it through the lens of a young non-Jewish seltzer convert, John Seekings, who falls in love with and buys The Pittsburgh Seltzer Works without knowing anything at all about seltzer. The device doesn’t always work, in my opinion - or, at least, it doesn’t always live up to many of the other seltzer voices in the book - however, it does take on a special bittersweet poignancy as many of the Works’ customers live in the Jewish Squirrel Hill neighborhood of Pittsburgh. Not surprisingly, though, seltzer is a New York story, and some of the book’s greatest moments and quotes come from New York seltzer men.

One of the most distinct voices belongs to Walter Backerman, a third generation seltzer man, who is one of the few to still deliver siphon bottles throughout New York City, and whom Joseph describes as “…a character escaped from a Quentin Tarantino film: brutally honest, full of chutzpah, with the charismatic power to spin dramatic stories packed with unexpected life lessons.” This is not hyperbole. In describing his calling to Joseph, Walter, who left law school to take over his father’s route, shares this:

“I think seltzer, aside from being a drink, is part of, like, an art form. You know, in the changing world that we live in, in a world of disposability, in a world where values are erratic, where the vague areas of society are so precarious that people can’t even get a true perspective on life, in a world like that, sometimes you need something that gives you permanence. I mean, there is something reassuring about consistency. Ya follow me? And for some people the fact that the seltzer man comes, you know, every week or two weeks, and brings something to their door, it’s a wonderful feeling. Even on the route, it’s a small-town atmosphere on wheels. In a world where you’re being run around, rammed around like a number, it’s good every now and then to know you are a person, and that somebody cares about you, and knows about you, knows about your life.”

In between pearls like this, Joseph also shares obscure but fascinating tidbits on almost every page. For example, did you know that seltzer takes its name from Niederselters, Germany, or that Ben Franklin actually played a role in bringing it to America?! How about that the founder of Fox’s U-bet took the famous name from his sojourn in Texas, where he picked up the phrase “you bet”?

And, on the subject of U-bet and its role as one of the essential ingredients of a perfect egg cream, Joseph quotes a 1975 Playboy interview in which Mel Brooks explains that “Psychologically, [the egg cream] is the opposite of circumcision. It pleasurably reaffirms your Jewishness.”

The same can be said of Seltzertopia itself. Like seltzer, this book will quench your thirst, and leave a pleasant aftertaste long after you’ve put it down.

Barry Joseph will be the opening night author of the Third Annual Berkshires’ Jewish Festival of Books, which begins with his appearance on Thursday, July 18th at 7 p.m. at Hevreh of Southern Berkshire, 270 State Road, Great Barrington, and runs through Sunday, July 21. Other authors include Tova Mirvis, The Book of Separation, on Saturday, July 20 following Shabbat services, which begin at 10 a.m., and Chef Rossi (she only goes by one name), author of The Raging Skillet at 10 a.m. on Sunday, July 21. For advance reservations, more information about these and other festival events, and to pre-order signed copies of the books, contact Hevreh at (413) 528-6378 or visit www.hevreh.org